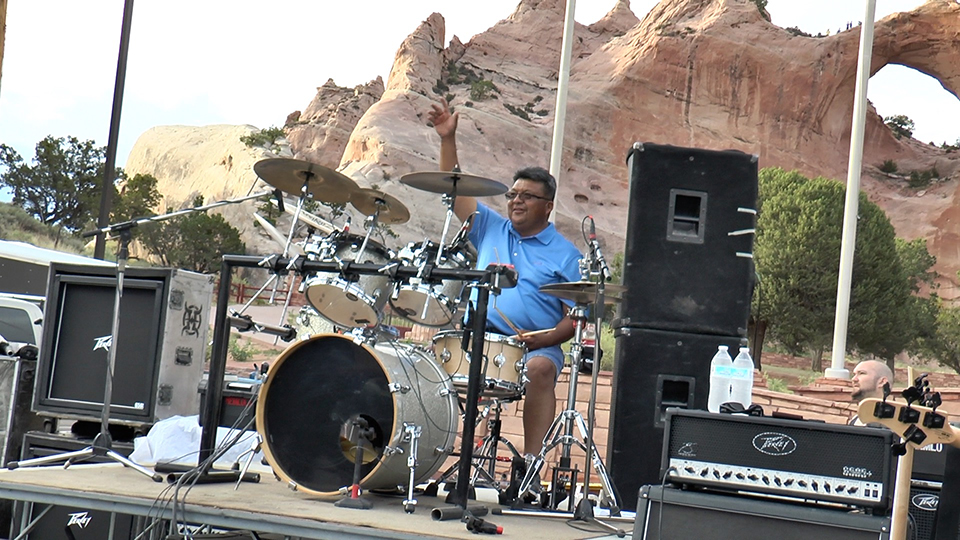 Navajo tribal councilmember Ed Yazzie at the drums during a performance. CSUN history professor Natale Zappia has recently completed work on a documentary and co-authored a book about the heavy metal music scene on the Navajo reservation. Photo by Ashkan Soltani Stone.

Zappia said the power of heavy metal music — with its aggressive sounds and distorted electric guitars — is bridging generations and bringing together communities from disparate corners of Indian Country, particularly on Navajo reservations.

“It’s so loud, and the beat is so demanding. It’s hard to understand how it’s captured entire communities,” said Zappia, an associate professor in CSUN’s Department of History. “But when you get there, and you listen and talk to people, you realize that it’s a very cathartic activity. 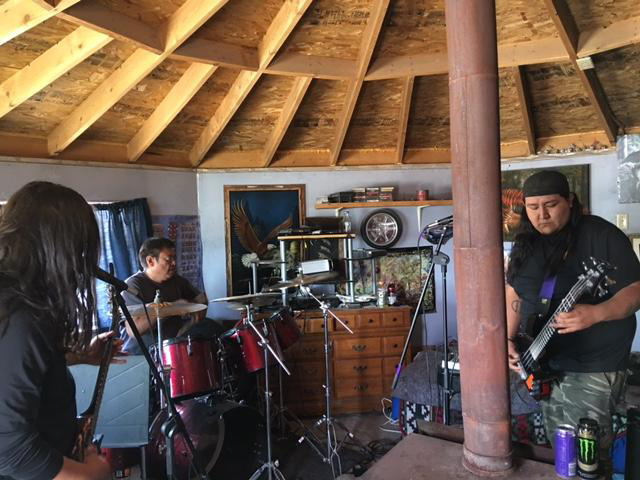 The band I Don’t Konform playing in a hogan on the Navajo reservation. Photo by Ashkan Soltani Stone.

“For native communities like the Diné (Navajo) people, metal gives them meaning that cuts through the difficulties of reservation life,” he said. “It offers them a very physical and musical outlet for telling their own indigenous stories, and expressing their frustrations, fears and even hopes about what it is like to live in their corner of the world.”

Zappia recently completed work on a documentary and co-authored a book with filmmaker Ashkan Soltani Stone, founding director of film studies at Weber State University, on the subject. Both are called “Rez Metal,” and they provide a look into the heavy metal music scene on the Navajo reservation. The documentary is currently on the film festival circuit, while the book is available on Amazon.

“Everyone we talked to for the documentary told us the same thing: ‘Metal helps create meaning for us,’” Zappia said. “And then they would always say that heavy metal ‘was Navajo’ — it was indigenous.”

The speakers would then point out that heavy metal music, much like members of Indigenous communities, remains “on the fringe of the mainstream” and regularly “goes against the grain,” Zappia said.

In doing his research, Zappia said he was surprised to find that many of the Navajo reservations’ tribal leaders embraced the music, seeing it as way to connect with members of the younger generation. Some, he said, even played in metal bands.

Navajo Tribal President Jonathan Nez (who is featured in the book and film) is a huge metal head, and he has created programming and venues to support the scene on the reservation. Zappia said Nez and other tribal leaders see the music as a way to have honest dialogue with young people.

“He saw the music as a way to overcome that feeling of alienation,” Zappia said. “He encouraged the young people to make the music a vehicle for expressing what is happening in their community, to make it their own, something to be proud of.”

Zappia said heavy metal music has been embraced by indigenous communities around the world for many of the same reasons Native communities in the United States have embraced it.

“You’ll find that every corner of the world has a metal scene,” he said. “Malta, Indonesia, Thailand, much of Southeast Asia, they all have metal scenes. It’s kind of associated with post-industrial communities who have been left behind — communities who have been disenfranchised, who are on the margins. But it also connects with rural communities like the Navajo Nation as well. “Metal speaks to their outsider status and gives voice to what they are feeling,” he said.