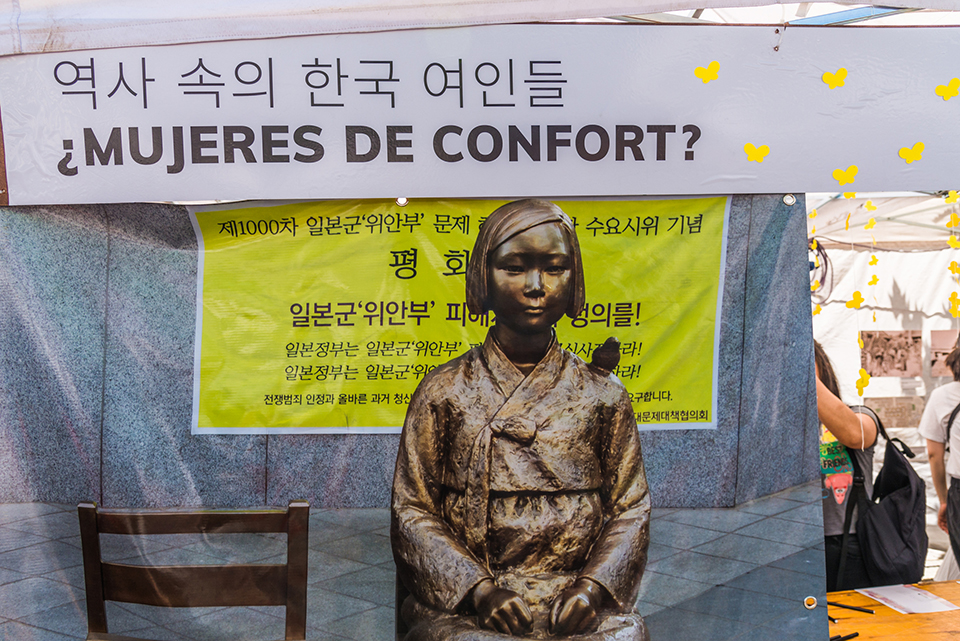 The above photo is a comfort woman statue in Argentina. CSUN communications studies professor Jinah Kim has received a $42,600 grant from the NEH to support her writing of a book about how Korean feminists across the diaspora are fighting efforts to deny and erase the history of the comfort women. Photo by Aleksandr_Vorobev, iStock

It took nearly four decades for the comfort women of World War II — women and girls forced into sexual slavery by the Imperial Japanese Army — to come forward and testify about their experiences. Jinah Kim, an associate professor of communication studies at California State University, Northridge, is determined to make sure those stories are not forgotten.

Kim has received a $42,600 grant from the National Endowment for the Humanities to support her writing of a book with the proposed title “Against Forgetting: Transpacific Feminist Arts and Activism.” Her book will address how Korean feminists across the diaspora are fighting efforts to deny and erase the history of the comfort women.

“For the past 10 years, I have been following with admiration as the support for the comfort women has grown around the world,” Kim said. “There are now memorials and statues recognizing the comfort women and what they went through around the globe, including here in Glendale. All this work demonstrates the creation of a powerful interracial and intergenerational collectivity organized against the denial of gender-based violence.

“The first ‘Statue of Peace’ was erected in 2011 in Seoul, South Korea, facing the Japanese embassy,” she said. “It’s a bronze statue of a young girl with a stern gaze, wearing a traditional Korean hanbok. It is meant to exemplify lost youth, a call for peace and to highlight the atrocities the women suffered in the past, and continue to live with today.”

Kim said she will use the grant money to support a reduction in her work hours during the next year so that she can dedicate a large chunk of her time to researching and writing the book.

She noted that the book was particularly timely, in light of the contentious discussions taking place across the United States about its own civil rights memorials and politics of commemoration.

“These debates prompt us to think about the power of memorials and commemoration,” Kim said. “With the comfort women, the memorials are about recognizing and acknowledging their history, and the ways that gender-based violence is silenced.”

The comfort women memorials are not without controversy. She said right-wing/conservatives in Japan have fought vigorously against efforts for redress against what happened to the women, including threatening to cut ties with municipalities — from San Francisco to Berlin — that erect memorials in their honor.

“The issue is still of deep importance to a powerful sector of the Japanese right, so there is a concerted effort to silence that history,” she said. “It wasn’t until the early 2000s that the comfort women’s experiences were included in Japanese history books. In 2017, there was a fight led by Japanese right-wing/conservatives to erase mention of the comfort women in Texas history books.”

The efforts to deny and erase history have been met with resistance from an intersection of women of all ages and ethnicities, including Japanese, who have organized to ensure that the experiences of the comfort women are recognized and remembered, Kim said.

She said it took decades for the comfort women to go public with their stories because of the shame associated with their experiences.

“Many of the women talk about how they felt such shame,” she said. “They didn’t think about this as something negative that had been forced upon them. They saw this as a shame that they were forced to bear.”

It was a shame they bore silently, yet it impacted all aspects of the women’s lives, Kim said.

“One of the things that I find really incredible is that many of the former comfort women never talked about their experiences with their family members until their stories were publicized through testimonies and other public acts, like the institution of memorials,” she said. “There was silence at home. Many of their family members learned about what happened to them when the issue became public.”

Kim called the family members’ experience “a postmemory.” First used by Holocaust scholars, the term describes the relationship that the “generation after” bears to the personal, collective and cultural trauma of those who came before — to experiences they “remember” only by means of the stories, images and behaviors among which they grew up.

“We have noticed that our parents’ generation — the ones who have lived through the violence of World War II, the Korean War — there’s a kind of silence, yet there is also a pain when it comes to certain topics,” she said, pointing to experiences in her own family as an example.

She said her mother was one of nine daughters. Two of her mother’s sisters died in Korea during the Korean War. There are certain things her mother’s generation never talks about, she said.

“There’s a silence, and so the next generation begins to fill that silence with what we think might have or could have happened to our parents or elders,” Kim said. “You see this particularly with members of the Asian diaspora, who are children of parents who have lived through wars like this. We feel connected to it because we hear their silence, we know this history and we fill that silence with our imagining about what we think happened. So, in some ways, we own that silence.

“This is the way that gender-based violence works,” she continued. “It is not allowed to be talked about. Yet, we see it in the way these women walk in pain, or the way they avoid certain places. By documenting and recognizing their experiences, the pain lessens for them, and for us.”