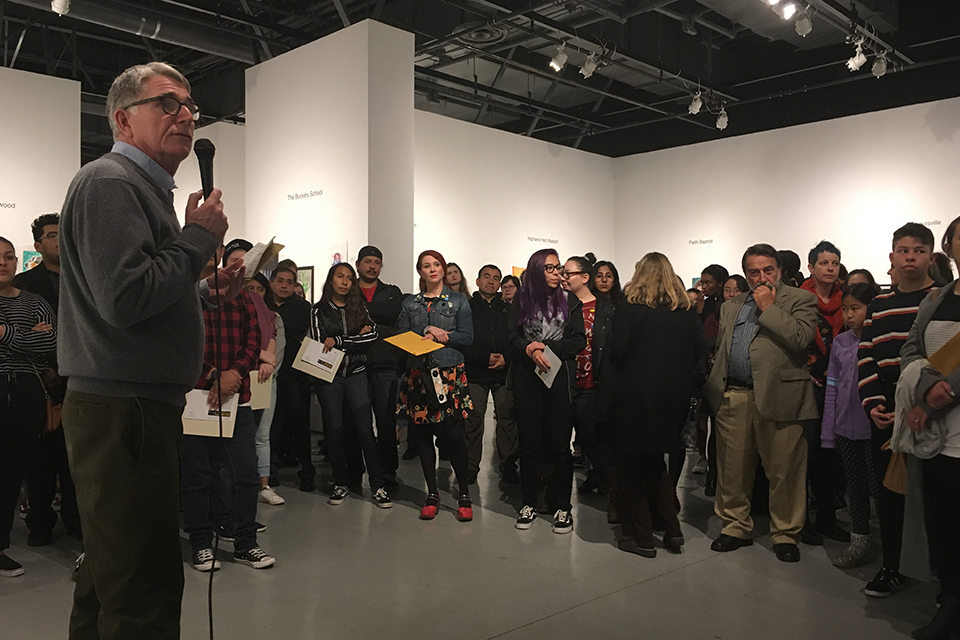 In early 2019, Jim Sweeters transformed the typically white, open spaces of the CSUN Art Galleries into a completely different world. Archways divided discrete rooms, including a dimly lit space with windows that revealed what looked like holy relics. Taking a step closer toward the glass inside this new religious shrine, viewers could see sculptures of artist and alumnus Jeffrey Vallance’s “Blinky the Friendly Hen.”

Sweeters, director of the CSUN Art Galleries, made sure this special art exhibition that paid tribute to the 40th anniversary of Vallance’s iconic project would be unlike most others, where artwork hung on plain white walls. Inspired by some of the religious imagery in the Blinky pieces, Sweeters took what he learned in his former life as a carpenter and recreated the space into a religious shrine, to invite visitors into a deep-dive experience into the myriad works related to Blinky.

It’s an example of how Sweeters, who recently retired after 36 years at CSUN and 12 years at the helm of the Art Galleries, helped realize some of the galleries’ most creative and successful shows. His last day on the job was Dec. 1. 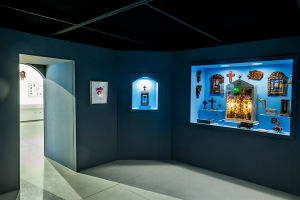 The CSUN Art Galleries were made to look like a religious shrine for the 40th anniversary exhibition for “Blinky the Friendly Hen” in 2019. Photo courtesy of Erika Ostrander.

“The list of exhibitions that he imagined and brought to the galleries over his 12-year tenure is impressive,” said Edward Alfano, head of CSUN’s Department of Art. “His ascent to become the university gallery director as a staff member was monumental in signifying the university’s recognition of the significance of the position, and entrusting him to expand and grow the reputation of the galleries and university.”

With CSUN English professor Charles Hatfield, Sweeters also led the efforts to put together “Comic Book Apocalypse: The Graphic World of Jack Kirby,” which featured more than 100 original drawings from the “Captain America” creator. In the gallery space, Kirby’s illustrations popped out on bright red walls that harked back to the Marvel comic books’ aesthetic. The exhibit drew about 1,000 visitors every week during its time in the gallery in fall 2015. “It’s been our biggest show ever,” Sweeters said.

Sweeters’ creative transformation of the bare-bones exhibit space is rooted in his unique background. 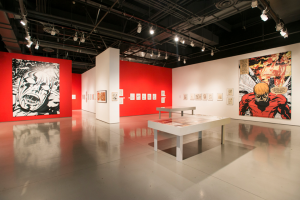 About 1,000 guests per week visited the CSUN Art Galleries for ““Comic Book Apocalypse: The Graphic World of Jack Kirby,” which featured more than 100 of Kirby’s illustrations. Photo courtesy of Erika Ostrander.

“I’m a little different from a lot of gallery directors in that I was not trained to be and am not an art historian,” Sweeters said. “I never took art classes — I just learned it off the street. I was a carpenter.”

He said being familiar with construction, from shelves to houses, helped with building unique art displays, such as the shrine in the “Blinky the Friendly Hen” show.

Sweeters rose to the director position by climbing the ranks. With his experience in construction, he was hired in the part-time position of preparator — someone who hangs art pieces or puts them on display — for the CSUN Art Galleries in 1984.

In 1992, when a full-time position as gallery technician — someone who maintains and prepares artworks for exhibition and storage — opened up, Sweeters jumped at the opportunity.

“I was tired of building houses and wanted another thing to do,” he said, “and I was always interested in the visual arts.

“After completing my undergraduate degree, I returned to Los Angeles to work as a carpenter and was drawn to the local music scene in the mid-1970s as a creative outlet,” he said. “This exposure also cultivated my visual sensibilities, and I started actively looking at art, going to galleries and museums. Seeking out these opportunities alone, I developed an affinity for certain artists whose work I still enjoy and with whom I had the pleasure of working and sustaining lifelong friendships.” 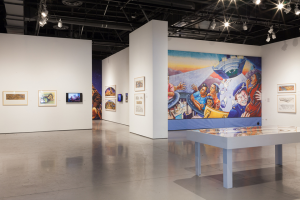 During his time at CSUN, Sweeters said, he’s seen the university overcome the impossible.

After the Northridge earthquake in 1994, the galleries continued functioning in trailers and hosting shows in “a large tent right by where The Soraya is now,” Sweeters said. This went on for seven years, until the gallery moved into its current facilities on Plummer Street/North University Drive in spring 2001.

By 2008, Sweeters had become a valuable member of the Art Galleries. Along with his growing experience, he had under his belt many years of familiarity with the galleries, its programming and the community of Northridge artists. So, when the Art Galleries were brought under the Dean’s Office of the Mike Curb College of Arts, Media, and Communication that year, he was hired as its new director.

When Sweeters first started as director, the galleries had a tiny budget but made do with their limited resources, he said. Sweeters, who didn’t have a background in art history, turned to faculty members to expertly curate the shows that he could then help bring to life in exhibits.

Since then, the galleries have grown to host (before the start of the pandemic) six shows a year in the Main Gallery and one every other week in the West Gallery — where CSUN art students can organize their own exhibits — producing more than 200 shows that have seen an average of 25,000 attendees annually. 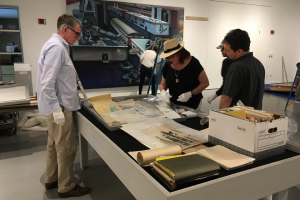 Jim Sweeters (left) works with muralist Judy Baca (center) to put together an exhibition of her work at the CSUN Art Galleries in 2017. Photo courtesy of Erika Ostrander.

“[Sweeters] has been a source of stability for the Department of Art,” said Erika Ostrander, office manager and exhibitions coordinator of the CSUN Art Galleries, “always open to helping students and artists figure out how to makes things work in the gallery space and realize their artistic vision.”

Due to the pandemic, this year’s operations were moved online. CSUN’s Art Galleries participated in “ConSortiUm,” a collaborative project across CSU museums and galleries to deliver virtual events on the visual arts.

“Jim Sweeters’ stewardship of the CSUN Art Galleries has been a model of everything that a university art gallery should be,” said Dan Hosken, dean of the Mike Curb College, “placing students at the center of the experience, and the educational mission of a university campus as the ultimate goal of an exhibition.”