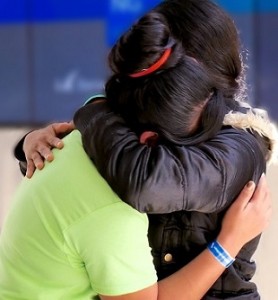 J.P. (right), lead plaintiff in a class-action lawsuit over the federal government’s “zero-tolerance” policy that resulted in family separations, reunites with her 16-year-old daughter at the Hollywood Burbank Airport in July 2018, after a two-month separation. Photo courtesy of Public Counsel.

When the mother entered the interview room in her orange jumpsuit, she looked dejected and thin, as if she hadn’t been eating or sleeping well.

She sat at a table, across from her legal team. Among them was Alejandra Acuña, a CSUN assistant professor of social work who as a licensed clinical social worker is qualified to conduct psychological evaluations. The professor sat with a lawyer from the pro bono public interest law firm Public Counsel and a translator who spoke the mother’s native language, Q’eqchi’, a Mayan dialect rarely spoken in the United States. U.S. Immigration and Customs Enforcement (ICE) officers watched through a window.

The mother had fled to the United States seeking asylum from Guatemala, where her abusive ex-husband had threatened to kill her. Now her hands trembled as she talked, and she picked at her nails, Acuña observed. The mother, identified in court documents as “J.P.,” said she couldn’t get the images out of her mind: the thoughts and memories of the day the government separated her from her 16-year-old daughter.

The legal team was interviewing J.P. in July 2018 at the James A. Musick Facility jail in Irvine, which contracted with ICE to hold detainees, while her daughter was in Phoenix, held at a shelter facility for minors separated from their parents.

J.P. couldn’t read, write or understand the languages spoken by her guards, and for weeks she didn’t understand where her daughter was or if she would ever see her again.

“It’s emotional, because I’m a mom and I know how much I love my daughter,” Acuña said. “I get that connection, and I understand that terror of separation. I don’t know if she thought her daughter was down the street or across the world.”

Acuña’s volunteer work that day was similar to the work she’s done numerous times. Every summer, Acuña volunteers to help Public Counsel and the advocacy group Human Rights First with a handful of evaluations, which are typically used in asylum hearings. For J.P., she provided a professional psychological evaluation of a person who had fled their country in hopes of a safer life in America. But this time, Acuña’s evaluation of the mother had a ripple effect — impacting the lives of thousands of migrant families by serving as key evidence in a class-action lawsuit in U.S. District Court against the federal government. 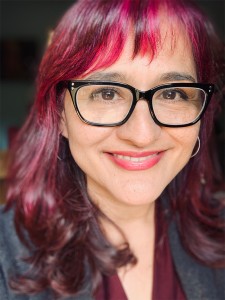 The lawsuit argued that the government owed mental health treatment to parents and children who were separated under the Trump administration’s “zero tolerance” policy — which called for the prosecution of everyone who crossed the border without authorization, resulting in parents being taken into custody and separated from their children.

The plaintiffs argued that separating children from parents causes severe trauma to both, and that the government was obligated to provide mental health treatment to reduce this harm.

The federal government countered that the plaintiffs received adequate care while in custody, and that its screenings showed no evidence of ongoing mental health issues.

Judge John A. Kronstadt of the U.S. District Court in Los Angeles found the plaintiffs’ evidence more compelling. In a November 2019 preliminary injunction, Kronstadt ordered the federal government to make mental health screenings and appropriate treatment available to the thousands of families separated under the policy.

Acuña’s work is impactful at CSUN, where in addition to teaching, she co-founded the Minority Male Mentoring program, known as M3, which aims to increase the graduation rate of males of color through various pathways. She’s also had great success with her human rights work. Acuña said that almost every Public Counsel and Human Rights First case with which she has helped has resulted in asylum being granted; she could list only one instance where the client was deported.

“My understanding is, when asylum seekers are able to include a psychological evaluation, it’s considered a game-changer,” Acuña said. “It makes a really big difference. The judges really weigh it heavily.”

Acuña’s evaluation of J.P. served as critical evidence of the trauma experienced by the mother, due to her detention and separation from her daughter. (Her daughter was evaluated by a separate psychologist.) They were already at risk, given the circumstances of their decision to come to the United States.

J.P. and her daughter — identified in court documents as “L.P.” — entered the United States near San Luis, Ariz., in May 2018 after a 10-day journey from a small village in Guatemala. The woman’s ex-husband had abused her and threatened to kill her by throwing her off of a mountain “where no one would ever find her,” according to Acuña’s psychological evaluation notes.

Near the end of their journey, J.P. and L.P. walked through knee-deep water, according to court documents, and they were soon stopped by men in white vehicles, who asked if they knew they were in the United States.

A few days later, officers took L.P. away from J.P., and L.P. fainted in terror, falling and leaving her face swollen for several days. J.P. didn’t know why her daughter was being tak​en, where she was going or when — or if — she would see her daughter again.

“You can imagine: [J.P.] is by herself. She kept asking, ‘Where’s my daughter, can I talk to my daughter?’” Acuña said. “And, fortunately, she must have asked the right person.”

Acuña’s interview with J.P. in Irvine took place soon after President Trump, amid heavy criticism, signed an executive order limiting family separations. Later that summer of 2018, a federal judge in San Diego issued a preliminary injunction in a separate lawsuit that called for families affected by the “zero tolerance” policy to be reunited within 30 days.

Though many of the families would soon be reunited, J.P.’s lawsuit contended that the government was obligated to repair the psychological damage resulting from the separations.

The moment-to-moment interactions between parent and child lay the foundation of trust, safety and security for a child, Acuña said. The more parents are attuned and responsive to their child’s needs, the more the child feels soothed, safe and learns to trust others and the world. Separation from a parent is a traumatic event, Acuña said, and not having a parent available for comfort has a serious impact on a child’s health and development.

Acuña concluded that J.P. exhibited numerous signs of post-traumatic stress disorder, depression, and anxiety as a result of the separation. For example, J.P. couldn’t sleep, had nightmares several nights a week, lost interest in eating, felt sad, worried, and despairing daily, and cried multiple times per day. Acuña cited studies showing that, due to the fundamental importance of parent-child attachments, the trauma of separations was likely to cause long-term effects.

That summer, based in part on Acuña’s psychological evaluation, an immigration judge granted a motion to release J.P. from detention, followed soon by a decision to release L.P. J.P. saw her daughter for the first time in two months at the Hollywood Burbank Airport. A reporter from The New York Times was there, and described the reunion thus:

“The woman, dressed in the black jacket and trousers she had worn during her journey over land to the United States, waited for her daughter’s plane to land. When the girl emerged, J.P. hugged her, cradled her in her arms and stroked her hair as the child wept on her shoulder.”

After their reunion, the mother and daughter moved to Florida, where another family member lived, per court documents. J.P.’s asylum case is still pending; cases typically take years to be resolved, according to Public Counsel.

The federal government initially appealed the preliminary injunction in the class-action suit but dropped that appeal in February 2020.

Advocates began focusing on reaching out to impacted families and connecting them with the resources that they had won in court.

In October, it was reported that hundreds of families are still separated because government officials are unable to find the parents of 545 children in detention.

Acuña plans to continue providing psychological evaluations to help asylum seekers with their claims. She said she has helped people who were stalked in their own countries and came here for safety, and that she’s worked with transgender individuals from several countries.

“The psychological evaluations I’ve done are heartbreaking,” Acuña said. “The experiences that they described in their families and their schools and their communities are just heartbreaking.

“I feel really lucky that I have summers off and that I can volunteer to do this,” she said. “And honestly, it feels so cool that with my clinical social work license and Ph.D. [in Social Welfare], I get to write something that can help somebody in need. It feels like a superpower.”

College of Social and Behavioral Sciences, Department of Social Work