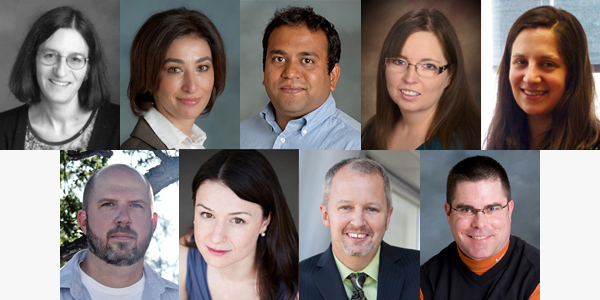 Intersections between opera and film in Germany at the beginning of the 20th century, marketplace offerings contributing to consumer well-being, and issues of equity and access within the social context of urban education: These topics and more will be further investigated by the nine faculty members selected for California State University, Northridge’s Research Fellows Program for the 2013-2014 academic year.

The program, founded in 2007, was created and funded collaboratively by the Office of the Provost, eight colleges and the Delmar T. Oviatt Library to offer faculty an opportunity to pursue compelling research or a creative activity.

Nine research fellowships were awarded based on what extent the proposed activity explores creative or original concepts; the likelihood of achievement of the stated outcomes in the proposed time frame; the benefits of the research or creative activity to society; the organization of the proposal; the ability to disseminate the results widely to advance understanding; and the contribution to the field of study or across other fields.

Research fellows are required to present their findings at a colloquium in the fall.

The selected research fellows and their respective projects are:

Susan Auerbach (Educational Leadership & Policy Studies) – Auerbach’s research topic is “Shaping a New Common Sense of Education Reform: Policy Discourse on ‘Parent Trigger’ Laws and Turnaround Schools.” Her research will address issues of equity and access within the social context of urban education and will build on her previous work on parent empowerment and school-community relations, extending it in new directions to critically examine the policy and media discourse on parent trigger laws and corporate reform in K-12 schools. She has been teaching at CSUN since 2003.

Maia Beruchashvili (Marketing) – Beruchashvili’s research program examines how marketplace offerings contribute to consumer well-being. In the context of weight loss and obesity, her research projects encompass social construction of emotion, overweight identity and consumer goals. She has been teaching at CSUN since fall 2007.

Vibhav Durgesh (Mechanical Engineering) – Durgesh’s research will focus on the experimental study of fluid flow in an aneurysm, the abnormal ballooning or bulging of the wall of a weakened blood vessel. His research will aid in developing accurate simulation models of blood flow inside an aneurysm, which is a complex and widely studied fluid dynamics problem. He has been teaching at CSUN since fall 2012.

Martha Escobar (Chicana/o Studies) – Escobar’s research involves a book manuscript entitled “Criminalization of Latina Migrants and the Construction of Irrecuperability.” In the book, she maintains that imprisonment serves to construct migrants as socially irrecuperable under a hegemonic governing logic by which migrants marked as “criminal aliens” are deported and banned from returning to the United States. She has been teaching at CSUN since fall 2011.

Ellen Jarosz (Special Collections and Archives) and Steve Kutay (Digital Services) – Jarosz and Kutay’s research project involves the creation of the Guided Resource Inquiry (GRI) Tool—a learning tool that provides a means for teaching faculty to assemble content drawn from Oviatt Library primary sources as a comprehensive approach to coursework and information competency objectives. This content will form the context for assignments that are constructed using the Document-based Question (DBQ) format, which allows for knowledge synthesis through resource analysis, rather than pure memorization of texts. Jarosz is a librarian of special collections and archives librarian at the Oviatt Library and has been at CSUN since fall 2011. Kutay has been a Digital Services Librarian the Oviatt Library since fall 2011.

Alexandra Monchick (Music) – Monchick’s research focuses on completing her book, “Opera as Film.” She will examine how film, film theory and film music influenced opera during the beginning of the 20th century. She has been at teaching at CSUN since 2011.

Scott Plunkett (Psychology) – Plunkett’s research involves making cross-cultural comparisons on parenting related to academics and mental health. The project includes combining data that has been collected in numerous states in the United States and many countries using the same parenting scales, academic outcomes and mental health outcomes. He has been teaching at CSUN since 1998.

Ben Yaspelkis (Kinesiology) – Yaspelkis’ research on diabetes is titled “Skeletal Muscle Insulin Resistance: The IKK pathway’s impact on insulin signaling” and will seek to resolve exactly how impairments in skeletal muscle insulin signaling are manifested and if the defects are reversible, either partially or entirely. The research will focus on inflammatory responses to nutrition and exercise and will add to his body of research on diabetes while seeking approaches to treatments that may improve the condition. He has been teaching at CSUN since 1996.