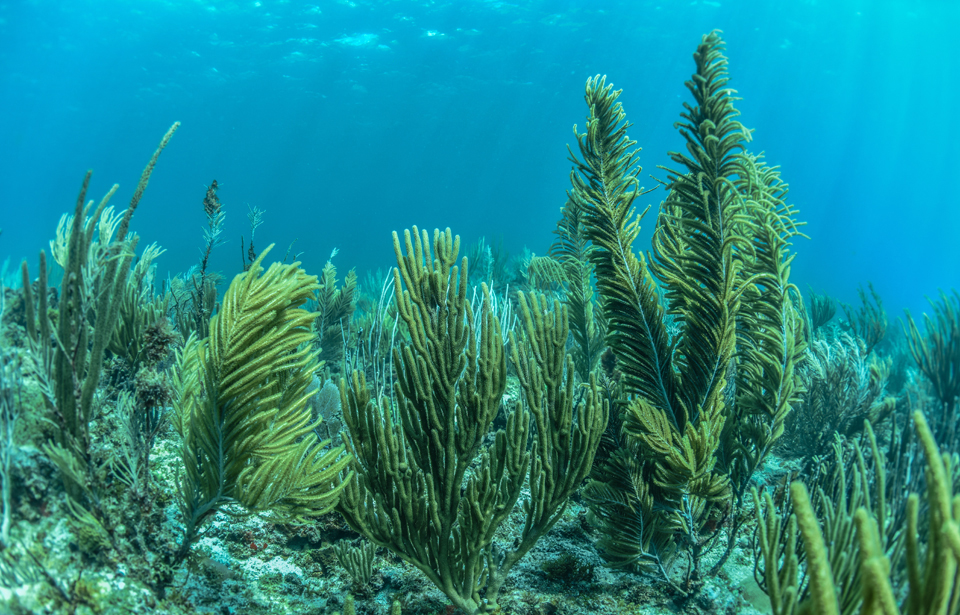 CSUN marine biologist Peter Emunds says the world of finance is providing insight into what is happening to Caribbean coral forests as the climate continues to change. Photo courtesy of Peter Edmunds

The world of finance is providing insight into what is happening to Caribbean coral forests as the climate continues to change, according to California State University, Northridge marine biologist Peter Edmunds.

Just like various investments in your portfolio react differently to fluctuations in financial markets, corals on the reefs near the Caribbean island of St. John in the U.S. Virgin Islands respond differently to the impact of climate change. It’s those different reactions that can influence which coral, in this case soft corals, survive.

“It’s just like the investments you might have in the stock market,” Edmunds explained. “You might choose to put a bunch of money in Tesla, Apple and General Motors. Then the value of your General Motors stock goes down because gas prices are soaring. But you do not have to worry because you have Tesla and Apple stock, so overall, your finances are okay because your investment portfolio is diverse — you have some stocks that are risky and might give you a lot of money, some things that aren’t as risky and don’t give as much money, and some things that are in the middle and give you average returns. 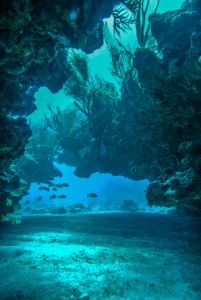 By “diversifying their portfolio,” Edmunds argues, soft corals on the reefs near the Caribbean island of St. John in the U.S. Virgin Islands respond differently to the impact of climate change than their stony counterparts. Photo courtesy of Peter Edmunds

“Increasingly in biology, we’ve been looking at how whole communities respond to climate change, rising temperatures, increasing storms and all the rest,” Edmunds continued. “There is this notion that you could look at the members of that community as a ‘portfolio.’ You’ve got some plants that are going to do very well under different conditions, some plants in the middle that are averaging, and you’ve got duplicates (of plants). Some duplicates are resistant to storms. Some duplicates are resistant to temperature change.

“As your spectrum of environmental disturbances come by, your ‘portfolio’ spreads the risk so that if this plant did really poorly and died off, it’s okay,” he said. “We’ve got these other organisms over here that are flourishing and, overall, you still have something else in the community.”

Add to that “portfolio” the functional redundancy of some organisms, and Edmunds and his research partner, ecologist Howard Lasker of the University at Buffalo, have found that not all corals in the reefs off St. Johnare being eradicated by the impact of climate change. Their findings, “Portfolio effects and functional redundancy contribute to the maintenance of octocoral forests on Caribbean reefs,” appeared in the May issue of the journal Scientific Reports.

Edmunds and Lasker have been studying stony, also called hard corals, and soft corals, known as octocoral, in the reefs off St. John for the past 20 years.

“Stony corals have painted a rather dismal picture because they tend to die off,” Edmunds said. “They have not recovered from the impact of rising sea temperatures and storms the way their companions the soft corals have.”

Soft corals, he said, have flexible skeletons and “wave around in the water.” They are the ones that produce underwater forests, and have fared better than their stony cousins under the effects of climate change.

“The soft corals have done remarkably well,” Edmunds said. “So, it’s very timely to ask, what is up with these soft corals? They seem to be making it when the stony corals are not.”

Edmunds and Lasker found that soft corals support a diverse collection of animals.

“That diverse assemblage produces an underwater forest, which has a canopy just like forests of trees on land,” Edmunds said. “But the individual species that contribute to that underwater forest have functional redundancy. Some of them are able to produce a tall canopy. Others are able to produce a short canopy. And still others have slightly different tolerances to environmental conditions. 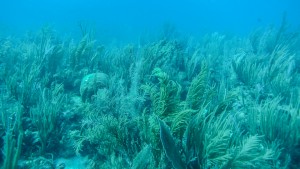 By “spreading the risk” and duplicating roles, Edmunds said, soft corals are better able to withstand the impact of climate change. Photo courtesy of Peter Edmunds.

“We think the reason they are able to survive, is that they’ve got this ‘portfolio’ effect going on,” he said. “They are spreading the risk among their community members. Not only are they spreading the risk, but they have duplicates for individual functions. And the function we were looking at is the ability to produce a forest.”

Edmunds said soft corals have evolved in such a way that “they’ve almost assigned different roles” to each member of their community. Different types of soft coral have different roles — some are tall, some short and some respond to situations differently.

“Those multiple skillsets, strengths you might say, allow them to survive in a way that stony coral — whose functions are pretty much what their name implies, ‘set in stone’ — cannot because of their role in the marine ecosystem,” he said.

Another piece of the puzzle, Edmunds said, is that the environment in which the coral live now is much different than it was 50, 100 or even 200 years ago.

“One of the things we see changing is that the seafloor is now heavily populated by algae,” Edmunds said. “Algae tends to smother things on the bottom. So, if you can find a way to escape that harsh environment, where you’re competing with algae, then you’ve got a better chance to live. This is where the soft corals also have an advantage because they’re flexible and can rapidly grow. They don’t spend time and energy producing a rigid framework the way the stony corals do.

Edmunds made the comparison between building a house out of cement and erecting a circus tent. One takes a long time to establish a foundation and then is rigid in its placement and structure.

“With a circus tent, you stick a pole up, you have some wires, you pull up a piece of canvas and, boom, you have a tent,” he said. “The soft corals produce this flexible, horn skeleton that shoots up through the algae and they are all waving around. On top of that, they’ve got this portfolio and functional redundancy thing going on. These corals are surviving, however there’s a ‘but:’

“But at the end of the day,” he continued, “they can’t do all the things that the stony corals used to do, including providing a solid foundation for the reef and marine ecosystem it supports.”

Questions still remain, Edmunds said, including what another Category 5 hurricane would do to the St. John’s reef.

“So much damage was done to the stony corals by the past two major hurricanes,” he said. “The soft corals have survived, but if the stony corals don’t get a chance to grow, to survive, then the long-term viability of these coral reefs is in jeopardy. One genetic species is not enough to save the marine ecosystem.”