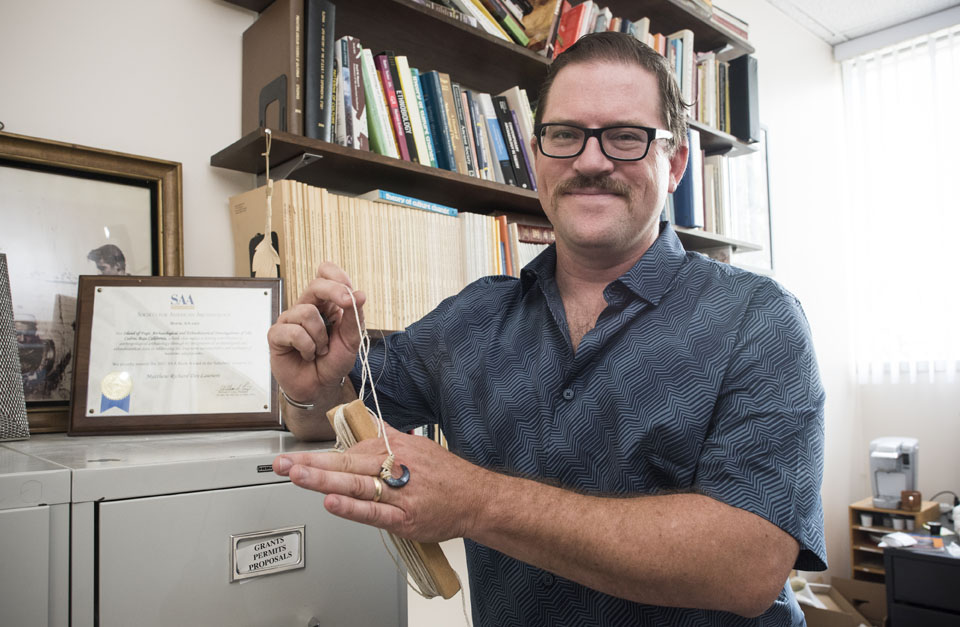 An international team of archaeologists, including California State University, Northridge anthropology professor Matthew Des Lauriers, received a grant from National Geographic for efforts in unearthing evidence that dates the arrival of Ancestral Native Americans to at least 13,000 years ago, off the coast of Baja California, Mexico.

“From the time I started my undergrad education at Cal State Bakersfield, where I began my training as a California archaeologist,” said Des Lauriers, “I always wanted to do something new that had not been done before. I really wanted to push that boundary.”

Des Lauriers’ work reveals that the early Cedros Islanders harvested resources that were only available by traveling well offshore in watercraft. This provides support for the recent scientific theory that the ancestors of today’s Native Americans arrived from Northeast Asia, traveling along the Pacific coast, as opposed to a route along the east side of the Rocky Mountains. Both alternatives run through or along the massive 1,000-mile-wide land bridge that connected the Chukotka Peninsula in Russia to the peninsula of Alaska during the last Ice Age.

Cedros Island is located in an isolated and largely unspoiled region in the state of Baja California, located on the Pacific coast of Mexico. After being occupied by indigenous populations for more than 13,000 years, the island was used for its natural resources by miners, missionaries and pirates for the past 500 years, according to Des Lauriers.

As part of their graduate research, 13 of Des Lauriers’ CSUN anthropology students have worked on various aspects of the Cedros Island project, ranging from field excavations, laboratory analysis, 3-D scanning and replicative analysis of ancient artifacts, to geographic information scanning analysis of site locations and watersheds.

To test the hypothesis that Ancestral Native American arrivals were in fact using boats to reach a new home, Des Lauriers and his colleague Dustin McKenzie, archaeology professor at Cabrillo College, replicated the fish hook nearly identical to one found in 2009 during an excavation. Des Lauriers said that archaeologists have identified some of the potential routes of arrival of the first Americans by finding connections between archaeological findings across the world. He said part of his attraction to “the big picture” may come from constant travel as a child of a U.S. Marine. Growing up, Des Lauriers found the different places and travels fascinating.

“Not everything is immediately apparent the first time you see something,” said Des Lauriers. “But you start to wonder, and that can grow into big questions.

“Baja California is one of the areas of North America that has had the least amount of archaeological research,” he continued. “The Instituto Nacional de Antropologia e Historia (INAH) and the director for the state of Baja California, Julia Bendimez Patterson, have created a very supportive working environment. The indigenous groups of Baja, California, some of the direct descendants of the people we are trying to understand, have been open and supportive of the work. We keep going back because it continues to be productive in terms of research.”

Des Lauriers plans to return to Baja California, to continue excavations in December.