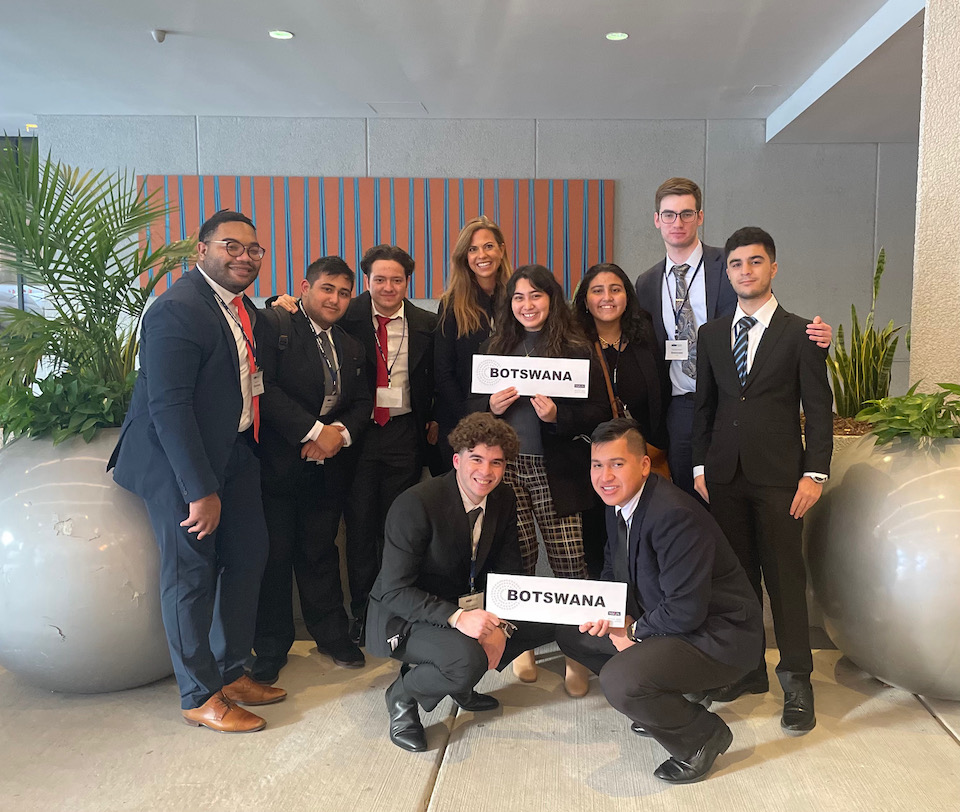 Coming off a first-place winning streak at competitions in New York and Washington, D.C., earlier in 2021, the CSUN Model United Nations team continues to accumulate achievements after scoring another Outstanding Delegation Award (first place) in the Northwest Model UN Conference, which took place Nov. 19-21 in Seattle.

Earlier that month, the CSUN team won Outstanding Delegation at the Washington Conference in D.C., where they represented Botswana on five different committees and won four position paper awards — a significant achievement, as each paper requires extensive research and multiple revisions before submission.

“I am especially proud of this year’s team because there were only three students in the class who had ever competed in college-level competitions before,” said political science professor Jennifer De Maio, the faculty advisor of the CSUN Model UN team. “The CSUN team is one of the very best in the nation, and it is so exciting and rewarding to watch the students’ dedication and hard work pay off.”

After two years of setbacks and virtual conferences, the D.C. event was the first to return to in-person attendance.

“Being able to travel again is honestly great. It’s one of the best parts of being on the Model UN team,” said political science junior Michael Tejax, one of the head delegates for the CSUN team. “These trips are very eye opening in the sense that you get to experience the different cultures from each city.”

The CSUN team has participated in the D.C. conference for more than a decade and has won Outstanding Delegation every year except in 2020, when the first virtual event took place. The team also has done well at the National Model United Nations (NMUN) conference in New York, typically winning first or second place.

According to political science major and rising senior Jacob Akopnik, leading the team this academic year has helped him learn more about the broader world, meet other people and overcome imposter syndrome — believing that you are not as competent as others perceive you to be.

“Michael [Tejax] and I did struggle a lot this semester with leading the team, just trying to teach stuff we didn’t even know perfectly, and it felt like we were going to be the reason that we don’t win all of a sudden. And we were scared that this would be the time that we didn’t,” Akopnik said. “But we ended up seeing that we could win — after winning both conferences we went to this semester — and it helped me realize that we’re putting in the necessary effort, and it’s going to pay off after.”

A lot of work goes into preparing for the conferences, according to the head delegates. Once the team is assigned a country, Akopnik and Tejax teach the members how to write the two-page position papers for the competition and how the speeches work, and they organize practices throughout the semester — with trial runs for the conferences.

The experience also has helped prepare Akopnik and Tejax for their future careers, by providing opportunities for communication in a professional environment, as well as networking with people from all over the world at the conferences, they said.

Both students said they hope to find work in Washington, D.C., and pursue careers in politics.