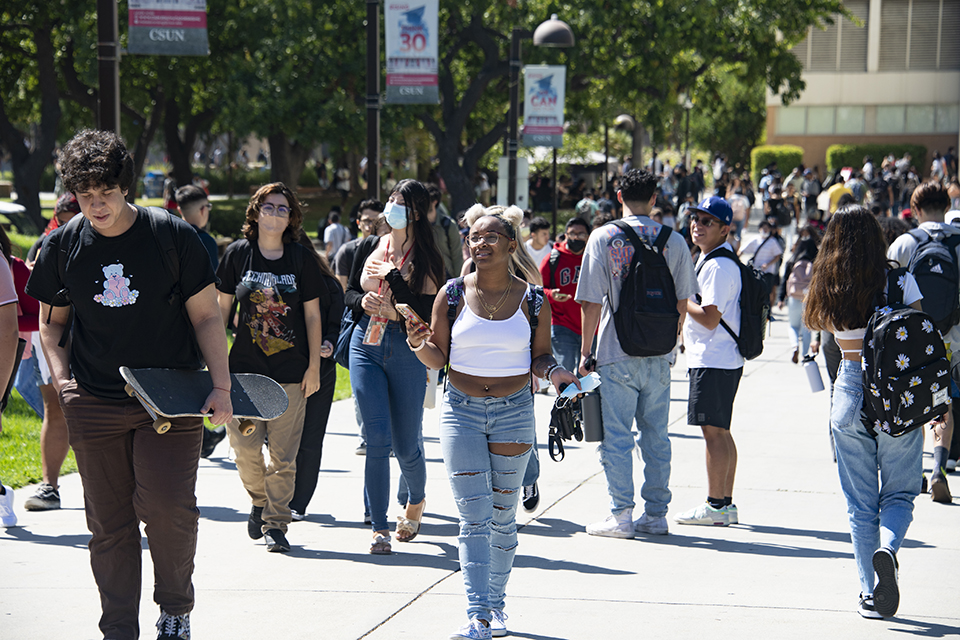 CSUN, along with four other CSUs in the area, local community college and K-12 public school districts have formed the Los Angeles Region K-16 Collaborative, which has been awarded approximately $18 million by the state to improve enrollment and degree completion of underrepresented students. Photo by Lee Choo.

California State University, Northridge, along with four other CSUs in the area, local community college and K-12 public school districts have formed the Los Angeles Region K-16 Collaborative, which has been awarded approximately $18 million by the state to improve enrollment and degree completion of underrepresented students in fields that lead to increased economic mobility, such as healthcare, engineering and computer science.

The educational institutions will work collectively to streamline the pathways — including the transfer process, enhanced dual-enrollment opportunities, and work-based learning opportunities — to getting and completing a college education.

“There’s always been talk, as the students matriculate through the educational systems, that they are ‘yours now’ once they move forward,” said Deborah Cours, interim associate vice president for undergraduate studies at CSUN and a member of the LA Compact’s Student Success Workgroup. “But, the reality is, the students have always been all of ours from the beginning, and we need to view them in that way so that the pathways are clear, particularly for first-generation and those who have historically felt that they didn’t belong in higher education or, for that matter, in Advanced Placement or STEM (science, technology, engineering and mathematics) classes in high school.”

“Together, our subregions represent millions of people and hundreds of thousands of students,” she said. “It makes sense to decentralize a little bit, with central oversight that includes an advisory board with employer and community representatives.”

CSUN’s focus will be on engineering and health science.

Cours said university officials will be building and expanding on already-established relationships with faculty and staff at its local feeder community college and K-12 public school districts to develop ways to encourage an interest in engineering and health sciences in students in elementary, middle and high schools.

The LA Regional Collaborative will vet proposals from the subregions, but CSUN imagines collaborating with community colleges to develop or expand existing dual-enrollment programs that make it easier for high schoolers interested in studying engineering or health science students to start on the path to careers.

CSUN officials also will work with their counterparts at local community colleges to streamline the transfer process and work to eliminate roadblocks for transfer students as they transition to university — roadblocks that historically have set transfer students back a semester or two after they transfer to a four-year institution.

“We need to think through the curriculum model,” Cours said. “If a student has an interest in getting a degree in a particular subject, whether that be psychology, engineering, biology or music, we need to make sure that the process is a smooth one, whether they started their college journey at a four-year institution, or a community college.

“We need to start having conversations with our colleagues across systems about what’s in our required courses and what’s the right curriculum pathway for all of us,” she said. “It’s so easy for students, particularly first-generation students, to say, ‘I don’t know what I am doing. I don’t feel connected with this,’ and leave. And then life happens, and they don’t continue on and get that degree, whether it’s a four-year or an associate degree.”

Cours pointed out that even an associate degree increases the chances of employment and higher wages.

“We have this illusion that the three systems — K-12, community colleges and the four-year institutions — talk to one another because we partner in narrow ways,” Cours said. “This collaborative aims to ensure that we really are talking to one another and that we are truly meeting the needs of the hundreds of thousands of students in the region where they are, not where we think they should be. It doesn’t matter if they end up at CSUN or some other institution, the key is to help them find the right path for their college and career goals.”

She said having employers as part of the conversation is key to ensuring the success of the collaborative. She noted that studies indicate that California is already “a million degrees short of what is needed to run this economy.”

“We’ve got to stop this nonsense of everybody kicking the blame down the hill,” Cours said. “We are all responsible, and we need to work together to solve the problem.”