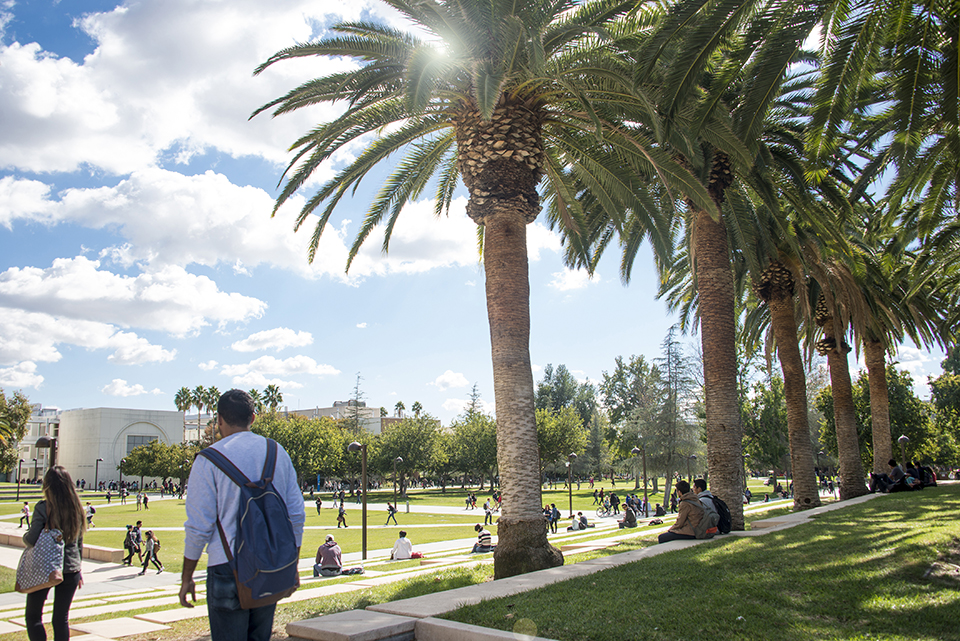 Alejandra Acuña spent years as a social worker at schools in Los Angeles, providing therapy to students dealing with undetected and untreated symptoms associated with post-traumatic stress disorder (PTSD). Her efforts gave the students the support and skills they needed to successfully complete their education.

Acuña, now an associate professor in California State University, Northridge’s Department of Social Work, wondered whether the lessons she learned while working in Los Angeles public schools could be applied at the college level to help underrepresented students overcome obstacles to completing their degrees or graduating in a timely manner.

“We know that students who come from underserved, under-resourced communities — particularly those who come from communities of color — have experienced traumatic events that can have repercussions in the classroom,” Acuña said. “That trauma may have its roots in violence, poverty and the everyday experiences of discrimination. Educators have long recognized the impact that trauma can have in the K-12 environment, and many school districts have developed programs to help students deal with that trauma. But what happens when those students get to college?

“We celebrate that they have ‘overcome obstacles’ and are now in college,” she said. “But the distress from trauma is still there. No one talks about that.”

Acuña adapted the therapy practices she used at Los Angeles public schools to what she saw were the needs of CSUN students. It was the first study of its kind to adapt an evidence-based curriculum called Cognitive Behavioral Intervention for Trauma in Schools (CBITS) for a college-age student population.

She offered voluntary PTSD symptom screening and wound up working with a group of 50 CSUN students, 90 percent of whom were of color and nearly 55 percent were male. Those students with clinically significant PTSD symptoms were invited to take part in small groups where they developed coping skills to deal with the triggers and symptoms of PTSD and learned to create a coherent narrative about their traumatic event. Making sense of what happened to students helped them to put the memories to rest, no longer chasing them in the middle of the night in the form of nightmares.

At the end of the project, Acuña said, the students reported that their PTSD symptoms improved and that they felt better equipped to deal with the pressures associated with earning a college degree.

“So many of the students attending public universities come from underrepresented populations,” Acuña said. “They often are the first in their families to go to college. That’s a lot of baggage to carry on their shoulders.”

Acuña said students are often uncomfortable, “even ashamed,” to talk about their experiences with traumatic events, feeling pressure to appear that they “fit in” and unwilling to draw attention to something they think may make them stand out in a negative way. “It’s not until they start having conversations with other students that they begin to realize that they are not alone, that other students have had similar experiences,” she said. “During the brief therapy sessions we conducted, the students said that once they realized that they were not alone, and we helped them develop tools to deal with the stresses they encountered, they said they felt better prepared to succeed.”

Acuña pointed out that higher education leaders have debated about the best ways to address the disparities in graduation rates. One of the things to consider and address is the impact PTSD has on a student’s academic performance.

“PTSD symptoms may be a factor interfering with student success,” she said. “As this study demonstrated, it is feasible at the college level to offer voluntary PTSD screening and support, particularly to hard-to-reach, underrepresented groups.

“It’s often hard to recognize the impact PTSD has on people, including our students,” Acuña said. “No one wants to talk about it, because in many ways these are private, sensitive and often painful topics. If we truly want our students to succeed, then it’s time we in higher education talked about the role PTSD may be playing in our students’ lives, and find ways to provide them with the appropriate support.”