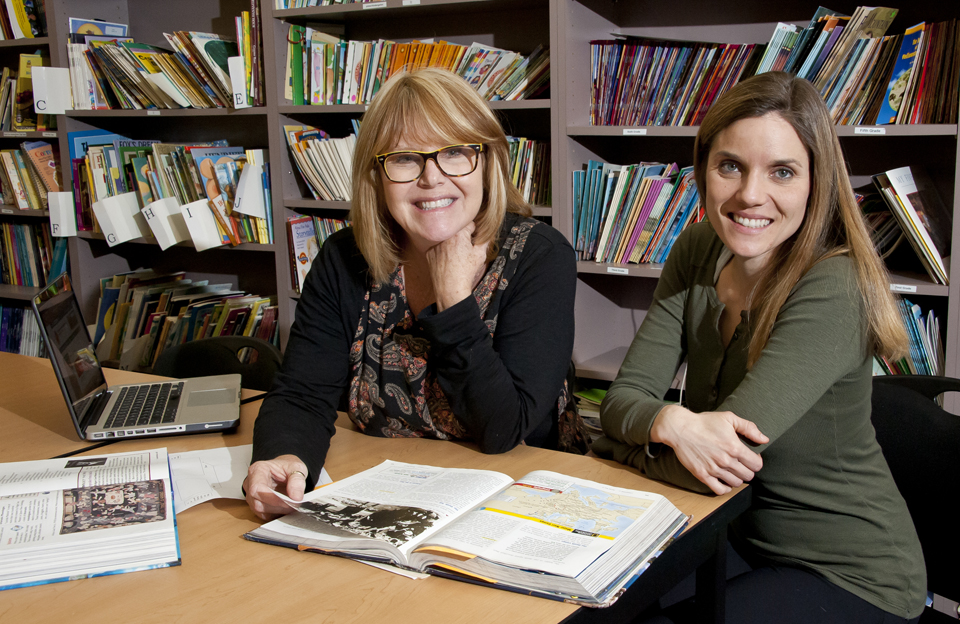 By the time students with specific learning disabilities — who make up 5 percent of the school-age population — get to high school, most have reading skills significantly below grade level, according to the National Center for Learning Disabilities.

It is difficult for these high schoolers to catch up. Resources are slim, reading intervention is expected to already have occurred and the focus is on getting the students to graduate. Consequently, many graduate with poor reading skills and bleak future prospects.

Four California State University, Northridge special education professors are hoping to change that. Through a $1.6 million, four-year grant from the U.S. Department of Education, Sally Spencer, Vanessa Goodwin, Sue Sears and Nancy Burstein are pioneering a model for much-needed high school literacy intervention that can be replicated and used throughout the nation. The Literate Adolescents Intervention Project includes a research component and will produce materials for teachers and coaches, making the model adaptable to any high school.

CSUN is one of only three grant awardees, along with the Michigan State Department of Education and the University of Texas at Austin, to develop literacy intervention models. The CSUN professors are the only group working on high school literacy intervention. In collaboration with the Los Angeles Unified School District’s Intensive Diagnostic Educational Centers (IDEC) program, the CSUN professors began working last fall at Alexander Hamilton High School and will implement their model at two other LAUSD high schools during the next three years.

Spencer said intensive intervention is crucial for the students at risk.

“When we are talking about kids with learning disabilities, the majority of them are put into special education because of reading problems,” Spencer said. “What research tells us is that in order to intervene with their reading problems, intervention needs to start really early and be really intensive. Many schools don’t have the resources for that, and the kids get further and further behind. By the time they go to high school, they are three or four grade levels behind and so discouraged that they’ve lost motivation.

“They still need that intensive intervention,” she continued, “but high schools have even fewer resources for that work.”

The professors — all former K-12 teachers — are building a collaborative model that integrates intensive reading strategies that go beyond intervention classes and into content classes — such as history and science — to make sure the students are being supported in a more holistic way. They are creating a cohort of content-area teachers at Hamilton who will receive training, as well as classroom assistance from a literacy intervention coach, to apply the strategies in their classes from ninth to 12th grade.

They hope to create a model that can be adapted to meet the unique needs of high schools across the country.

“One of the things we are learning is that high schools are very different from one another. What might work at one might be different at another,” Burstein said. “You need flexibility in this model.”

At Hamilton, the reading intervention teacher is CSUN alumna Lindsay Young, who graduated in 2013 with a master’s degree in special education. Young said she is already seeing results from new evidence-based reading intervention strategies that use material appropriate to students’ grade levels, rather than elementary materials that match their reading levels.

The goal is to get the ninth graders integrated into more general education classes, she said.

“Before this, I had just been doing programs that weren’t really working,” Young said. “We have ninth graders who, at first, seemed like they could read a textbook, but had no idea what they were reading. We have an 11th grader who was reading at a second-grade level and until this year, teachers were giving him second-grade level words. For the first time, the teachers are giving him words like ‘preventable.’ At the beginning of the year, when tested on 15 multiple-syllable words, he couldn’t read any of them. This month, he correctly read eight.”

Students who solely have been in special education classes also are far below average in technological literacy, because they have had little to no exposure, Goodwin said.

“We found that some don’t know how to turn on a laptop, so we spent two weeks teaching them how to do that, open a document and save it,” Goodwin said. “We are trying to embed most of their instruction in authentic technology so that they are writing things on the computer, saving documents, pulling them up again, adding to things, and will eventually use speech-to-text and text-to-speech programs.”

Young said literacy intervention in high school is not just for literacy’s sake — reading and writing are crucial to functioning in an adult world.

“They are going to encounter complex texts, such as the driver’s manual and college textbooks — we are preparing them for what they are actually going to see,” Young said.

Low literacy is correlated with more dire consequences than limiting a person’s success. According to the National Center for Education Statistics prison inmates score much lower in literacy than the average person. Spencer said other research has found that 40 percent of juvenile offenders have learning disabilities, as opposed to 5 percent of the general population, and 70 percent of adult inmates have not finished high school.

Jeff Fractor, a special education teacher who serves as the literacy coach at Hamilton, spent time teaching reading in prisons before returning to work in public schools.

“The chance of learning how to read in prison is low,” Fractor said. “Once they’re there, it’s kind of late. They’ve probably already done something that will prevent them from securing a job upon release, and therefore, learning to read isn’t important for many inmates. It’s the main reason why I left the prisons and came back to K-12 — it’s a lot less expensive to provide intensive intervention before they leave school than afterward.”

If their model can succeed in LAUSD, the second-largest school district in the country, it can succeed anywhere, the CSUN team members said. They said they hope to see these strategies adopted in general education classrooms, where students also struggle with reading.

The partnership between CSUN and LAUSD can help encourage a more inclusive culture in education, the professors said.

“We’ve been very fortunate that [the people at] IDEC have been so supportive and collaborative, and lucky that our perspective on how to teach reading was aligned with theirs,” Sears said. “It’s a unique opportunity to make a sustainable difference when a university and a school district are on the same page.”

As former K-12 teachers, the CSUN professors said they are excited to be part of such a groundbreaking initiative. They said they began their journey as educators with a desire to help kids, and this project gives them an opportunity to affect change on a higher level.

“What this grant allows us to do is what you always wanted to do as a K-12 teacher, but never could — to spend as much time as you need to make your instruction as effective as it can be,” Spencer said. “It’s really exciting.”