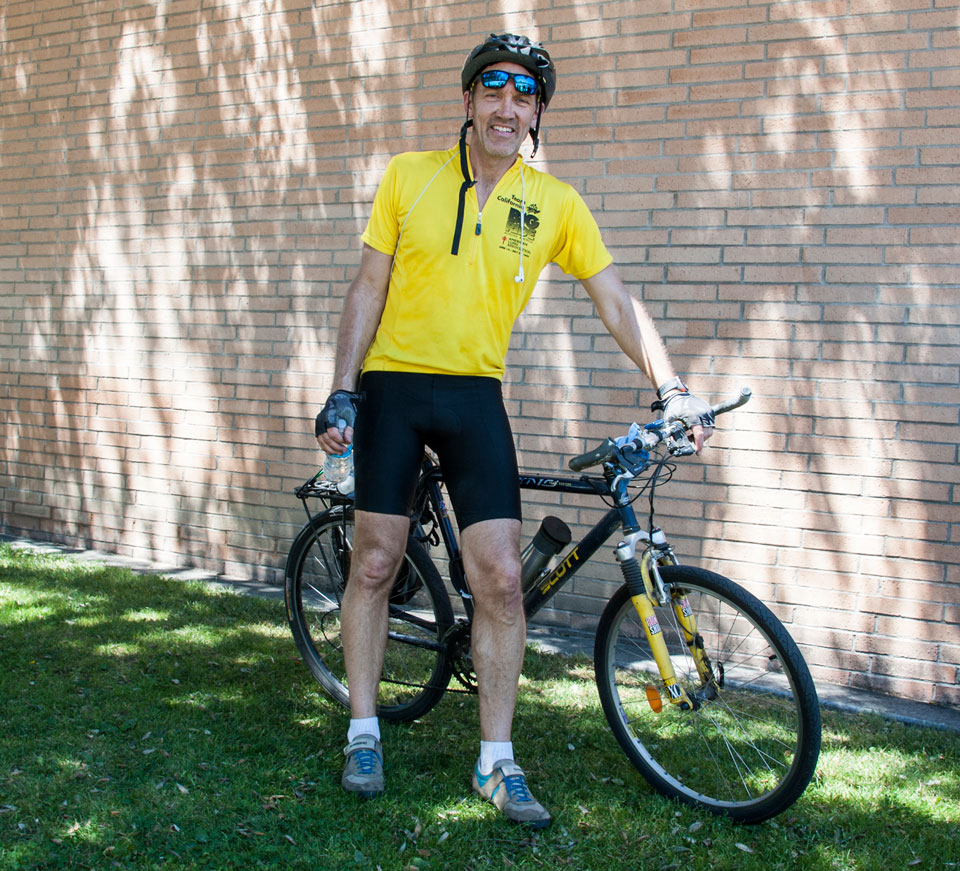 To set an example of fitness and alternative transportation, Dr. Ric Sletten is willing to go the distance. Sixty miles, to be precise.

The head team physician at California State University, Northridge’s Sports Medicine Clinic rode his bicycle May 15 from his home in Ventura to the San Fernando Valley campus. It was the second time he’d completed the trek, the first time in 2001.

“My message both times was not necessarily to bike to work, but to think twice about getting in your car — and to get other people more active,” said Sletten, who has worked at CSUN’s Klotz Student Health Center since 1991.

Sletten’s key inspiration, he said, was his father, Harold — an engineer who worked at Atomics International, a division of Rockwell International, and emphasized energy conservation.

“My dad used to say, ‘The car set us free,’” said Sletten, who grew up in Northridge just a mile from campus. “But he carpooled when he lived just four-and-a-half miles from work and gas was 25 cents a gallon. It was an energy issue, and saving money.” The family settled in the Valley in 1957, just one year before the school opened as San Fernando Valley State College. Sletten’s older brother and sister earned their degrees from CSUN.

On a typical day, the doctor commutes via rail, riding Metrolink 50 miles from Ventura. So, for Sletten, a five-hour-plus morning ride was “pure joy.” He and his wife, Julie Sletten ’96, M.S. (Exercise Physiology), have traveled the globe on bicycles, forging great friendships along the way.

“When you’re on a bike, you’re inherently unthreatening to people,” Sletten said.

The doctor left home at 5:30 a.m. last Thursday, L.A.’s “Bike to Work Day,” traveling east to Northridge. He peddled through Ventura, Oxnard, Camarillo, Moorpark and Simi Valley until finally climbing over the Santa Susana Pass, coasting into Chatsworth and the west Valley.

“It’s always fun to finish a ride with a joyful downhill!” he said.

Sletten braved intense Santa Ana winds and toasty temperatures to arrive at the campus about 11 a.m. En route, he even checked in by cell phone with Ventura radio morning show KVTA 1590 AM about his bicycle quest.

Sletten and his wife run the Sletten Wellness Medical Center in Ventura, where they treat students with autism and attention deficit disorder, using natural methods to tackle issues such as asthma and allergies, and “try to minimize the need for drugs,” he said.

On campus, he works with more than 400 student-athletes, colleagues and other scholars to promote healthier living from a whole-body perspective. “My focus is planting seeds,” he said. “I’m hoping to inspire others.”

After growing up in the San Fernando Valley, Sletten moved south to earn his bachelor’s degree at the University of California, Irvine, then north to the University of California, San Francisco School of Medicine. He settled in Ventura to complete his medical residency and fellowship in sports medicine. He split his time between emergency room work at Kaiser Permanente in Woodland Hills and Ventura County Medical Center, and his Ventura private practice and CSUN. Recently, he was happy to give up the ER work in favor of more time treating and working with students at CSUN, Sletten said. Dr. Ric Sletten, CSUN head team physician, cools off in the shade after biking 60 miles from Ventura, May 15.