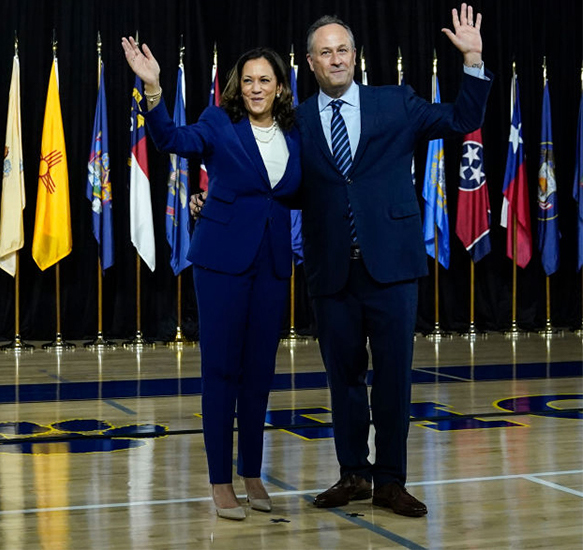 A study by CSUN researchers found that conservatives labeled now-Vice President Kamala Harris (above, with her husband Douglas Emhoff)  as “white” much more often than liberals, who tended to categorize her as multiracial. Labeling Harris as “white” may be influenced by a desired to diminish the power of her biracial ancestry to attract voters, the researchers said.

As the fight for the White House heated up last year and Kamala Harris became the first woman of color on a major party ticket, California State University, Northridge researchers wondered if political ideology would influence how people perceived her biracial ancestry.

What they found surprised them. Conservatives labeled now-Vice President Harris — whose mother is South Asian and was born in India and father is Black and was born in Jamaica — as “white” much more often than liberals, who tended to categorize her as multiracial.

“There were some theories out there suggesting that conservatives were less willing to acknowledge that she is Black — she identifies herself as a Black woman and frequently references her Indian heritage — than liberals, who would be more willing to recognize her multiracial ancestry,” said CSUN psychology professor Debbie Ma.

Associate professor of psychology Justin Kantner and Danita Hohl, a graduate student pursuing a master’s degree in psychology, worked with Ma on the study. The results of their research, “The politics of identity: The unexpected role of political orientation on racial categorizations of Kamala Harris,” were published earlier this year in the journal Analysis of Social Issues and Public Policy.

Ma and Kantner specialize in studying multiracial people and how they are perceived by others, and how that impacts their roles in society. They said last year’s election presented a unique opportunity to study how politics influences the way voters see multiracial candidates.

“The first time we really had this discussion was in 2008, when Barack Obama ran for president,” Ma said. “His Black and white parentage figured prominently in discussions regarding his racial identity. But that was soon eclipsed by challenges to his nationality, which ultimately gave rise to the ‘birther movement’ and the conspiracy theory that he was not a natural-born U.S. citizen and thus ineligible to run for president.

“Fast forward three presidential election cycles and Americans are still grappling with the same questions regarding how to racially categorize Harris, and whether she has the right to claim different aspects of her identity,” Ma said.

“One of our big questions heading into this study was: ‘Are liberals and conservatives seeing the same face when they look at Kamala Harris?’” Kantner said. “This was based on an intuition from news coverage and other forms of media that political leanings seem to affect how people classify Harris’ race.”

To find answers to their questions, Ma, Hohl and Kantner surveyed people who identified as politically conservative and politically liberal to see how their ideology impacted how they perceived Harris’ biracial ancestry, and whether their political orientation would lead them to see her differently. Their research included showing the study’s participants pictures of Harris.

The researchers initially tested whether political orientation might influence how a person would classify Harris’ ethnicity — Black, Indian or somewhere in between, based on pictures of her and other people who were either Black or Indian. They found no evidence that conservatives and liberals differed in how they perceptually saw her face relative to monoracial Indian and Black faces.

But when they were asked to categorize her ethnicity, conservatives were more likely to call her “white” than their liberal counterparts, which led to the question of “why?”

The researchers found that conservative participants believed that having a non-white candidate on a political ticket would help both a Democrat and a Republican slate more than liberal participants did.

“However, conservatives rated the positive impact of a non-white candidate higher for a Democrat ticket,” Ma said. “That perception could explain why they classified Harris as white. They wanted to deny their opponents what they saw as a political advantage.”

Both Ma and Kantner said the fact that Harris was categorized as white by so many conservatives merits greater attention.

“If anti-Black prejudice has something to do with it, as our data suggests, why would that be associated with calling someone ‘white’?” Kantner asked.