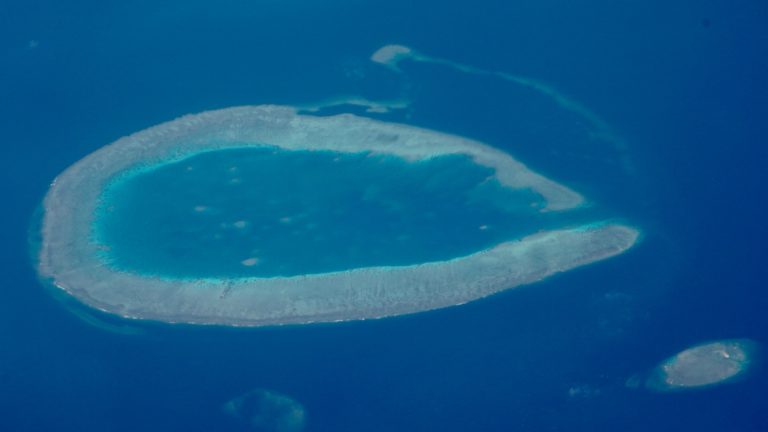 An aerial view of an Australian island which is part of the Great Barrier Reef. Photos taken overhead are compared with readings under the water by scientists. Photo courtesy of Bob Carpenter.

The National Aeronautics and Space Administration (NASA) is known for its in-depth work in space exploration and research. But space is not its final frontier. California State University, Northridge marine biology professor Bob Carpenter is among a team of 20 international researchers and engineers who are taking NASA on a voyage to the depths of the ocean as part of a $15 million, three-year project to go where no NASA technology has gone before.

Carpenter explained the project, known as the Coral Reef Airborne Laboratory (CORAL), could have momentous effects on the way Earth’s oceans are explored in the future.

“There are people along the political spectrum who think NASA should always be looking out and not in,” he said. “This [project] is definitely looking in, and underwater. Today, we scientists have looked at maybe 1 percent of the area of coral reefs in the world. In this project, if we can establish relationships between what the images we are collecting tell us and what we determine is there and how it is functioning … theoretically you could get 100 percent coverage of the coral reefs in the world.”

CORAL uses spectrometers created by the Jet Propulsion Laboratory (JPL) in Pasadena that are generally used on the Mars Rovers. Spectrometers are placed on a plane to take aerial photos of the reefs while a dozen scientists are scuba diving at the same location and making measurements of the coral ecosystems.

Carpenter explained the project is expected to provide more coverage of coral reefs than any other project he has ever done.

“The big picture is to try to correlate reef condition — what’s there and what it’s doing, how that reef is performing,” he said. “If we can correlate that with what latitude it’s at, how close it is to major humans populations, the prevailing swell and water motion, it’s going to give us a much broader understanding of how reefs are doing relative to a suite of environmental drivers.”

The team recently returned from its first of four campaigns in the Pacific Ocean — the Great Barrier Reef. Carpenter and his two team members from CSUN, postdoctoral researcher Chiara Pisapia and technician Sam Ginther, placed instruments which measure water flow, calcification and oxygen of the corals, at reefs on both the north and south ends of the GBR.

Pisapia said one of the biggest benefits of the project will be an understanding of how to better protect coral reefs in a changing global climate.

“The most important application of this research is the management and preservation of the reefs,” she said. “When you know where different [corals] are, you can manage them better.”

Ginther said the best part of the project is working alongside researchers from a variety of disciplines.

“I came from a fish ecology background, but I wanted more exposure to different marine backgrounds so it’s a little bit of oceanography, biology and a lot of everything else in this project,” he said. “It’s interesting to see it all work together, you get a different perspective on different locations, too.”

The next campaign begins in February at the Hawai’i Institute of Marine Biology. Carpenter said if NASA approves the results of the first four campaigns, the project could receive additional funding to research reefs beyond the Pacific, and possibly have the spectrometer placed on a satellite instead of a plane.

“A longer-term outcome would be to develop the capability of putting a sensor on a satellite,” he said. “You could cover all the reefs of the world, and you could start doing time series as well. You could survey [the reefs] yearly. It would be an unparalleled data set.”

For now, project CORAL is providing scientists from countries including Australia, Italy and the United States with the opportunity of a lifetime.

“The chance to be involved in this project in some ways could change our understanding of how reefs are structured over a broad spatial scale,” Carpenter said. “We can better see how coral reefs function relative to these important environmental factors. And in reality, we are creating new knowledge through research.”