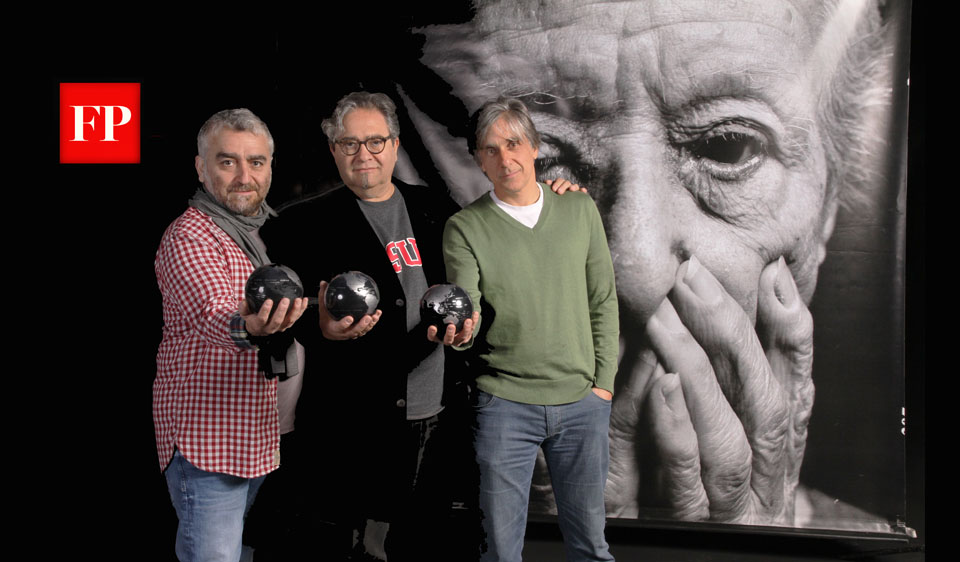 California State University, Northridge photography professor Levon Parian and two of his artistic colleagues are among the 100 leading global thinkers of 2015, as identified by Foreign Policy magazine. They were awarded for “preserving the history of a genocide” through their innovative, larger-than-life public installation “iwitness,” showcasing portraits of Armenian genocide survivors created in commemoration of the 100th anniversary of the Armenian Genocide. The installation was the first of its kind in Los Angeles’ landmark Grand Park, hosted by Los Angeles County Supervisor Michael D. Antonovich. It was up from April to May in 2015 and drew thousands of visitors.

“iwitness” was an artistic and architectural collaboration between Parian, fellow photographer Ara Oshagan and architect Vahagn Thomasian. They created a series of 24 towering asymmetrical photographic sculptures 8 to 16 feet tall, made up of portraits printed on vinyl and wrapped around heavy metal frames, secured by 2,000 lbs. of concrete weights to keep them from blowing over. At night, they were illuminated like lanterns via solar-powered lights from inside the structures.

Each structure showed two portraits, and written on the ground in front of each image was a short description of the subject, including their birthdate, birthplace and a snippet of their oral history.

The portraits were not picture perfect; faces were fixed on irregular, angular frames and any straight lines were distorted to represent the kinds of lives the survivors led and the uncertainty they had felt about their futures, Parian said.

“The irregular, angular shapes of the sculptures spoke to an unbalanced world, one continually at risk of war, ethnic cleansing and genocide: the crimes against humanity these survivors witnessed first-hand,” Oshagan said.

He said being recognized by Foreign Policy magazine was an affirmation of what the artists hoped “iwitness” would do.

“Our intention was to change the direction of the way people think about the genocide and get the truth out there,” Parian said.

Parian and Oshagan have been documenting genocide survivors for the past 20 years, inspired by the personal connection they have with the event. Like many Armenians of his generation, Parian has family members who witnessed the genocide — his mother’s parents fled to Jerusalem and stayed in an Armenian convent, and his grandfather was an Ottoman cavalry soldier who fled the massacres only to find himself struggling for survival in the deserts of Syria. He eventually led thousands of deported Armenians to safety.

Parian pointed to the Turkish government’s denial that the mass deportations and massacres perpetrated on their Armenian citizens in 1915 was genocide as a motivation behind the exhibition’s creation.

“The term ‘genocide’ was coined by Raphel Lemkin in 1944 to describe what happened to the Armenians in 1915, and it was the first genocide of the 20th century,” Parian said. “When they deny that this is a genocide, it can go unrecognized and that is dangerous. We see that [genocide] keeps getting repeated, it keeps happening over and over again. Besides how can the Turks deny an event that the very word ‘genocide’ was designed to describe? ”

For the “iwitness’” creators, the fact that the genocide is still contested today makes it even more important to show people that there were survivors, though many of them have passed on.

“We have not been allowed to heal, even now four generations and 100 years later,” said Thomasian. “It is an open wound, unfinished business for us. For all of humanity.”

The “iwitness” design denies anyone the opportunity to forget the genocide, Parian said, as the viewers are dwarfed by huge heads as they walk through a forest of faces. Levon Parian stands by the exhibition honoring the 100th anniversary of the Armenian Genocide, titled “I Witness.” Photo by Ara Oshagan.

“There were people who came from all over the world to go to the [Walt Disney Concert Hall nearby], and the audience and musicians came to see the exhibit,” Parian said. “For some of them, it was a moment of discovery because they didn’t know what [the portraits] were, and it required them to think a little bit and work out what these things were about.”

For some of the viewers, “iwitness” was a personal, interactive experience with the now deceased survivors.

“Families came to the installation to be together and take pictures and remember the stories they were told of the horrors,” Parian said. “One of the most moving images I saw was a young girl hugging one of the sculptures, who said it’s not everyday you get to hug your grandfather again.”

News outlets such as the Los Angeles Times and the Associated Press reported on “iwitness,” but Parian said the installation most likely got the attention of Foreign Policy magazine because of its wide, global reach through social media.

Parian was not very familiar with the magazine, so when the “iwitness” team were honored on Dec. 1, at an awards ceremony in Washington, D.C., he was surprised to be in the same room with individuals who were featured in the news doing work in politics, climate science, diplomacy, and at the forefront of the medical field, such as German Chancellor Angela Merkel, First Minister of Scotland Nicola Sturgeon, Boyan Slat, president of The Ocean Cleanup, and epidemiologist and ebola Researcher Mosoka Fallah.

Parian said he hopes that the recognition will help “iwitness” to travel all over the world — even to Istanbul, Turkey — and ultimately make a home for itself in Armenia.