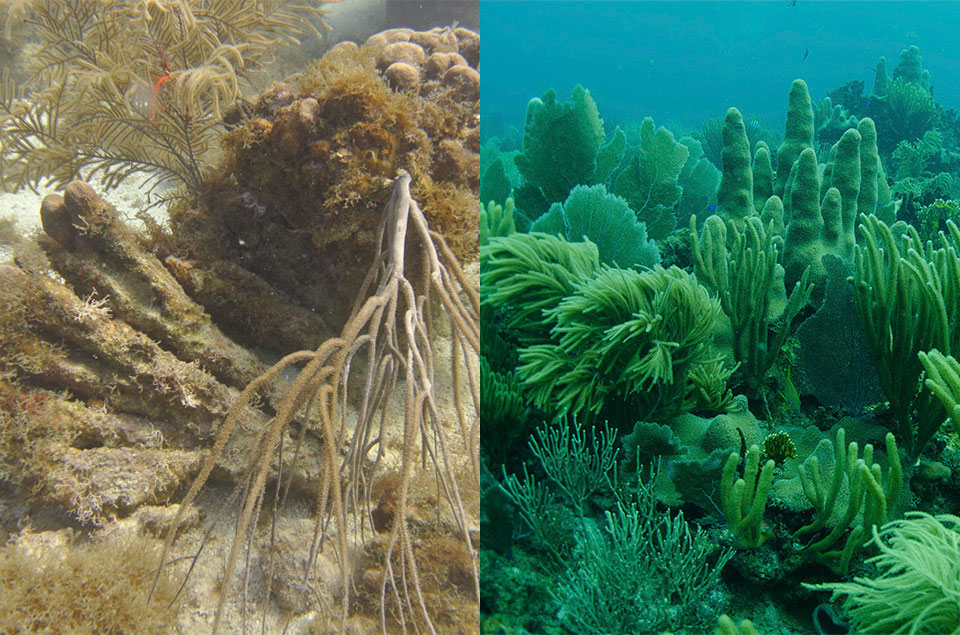 Two views of the coral reef of St. John U.S. Virgin Islands. The photo on the right shows the reef vibrant and full of life in 2013. The photo on the left was taken just last month, after hurricanes Irma and Maria tore through the region. The reef is now more sparsely populated, with many coral colonies either severely damaged or sweated away, Photos by Peter Edmunds

A once-vibrant reef was now littered with broken coral, the remains of soft sponges and soft coral ripped from their homes on the ocean floor, and 5- to 10-ton boulders that had been tossed about as if they were pebbles. Going deeper underwater, the signs of destruction were less obvious but could still impact life on the reefs for generations to come. Edmunds essentially became a forensic ecologist on a short research expedition that he and geologist Howard Lasker of the University at Buffalo made in mid-November to the waters of the Virgin Islands National Park, part of the U.S. National Park Service. They made the trip to study the hurricanes’ impact on the coral reef near St. John when the storms tore into the region just four months ago.

“The key issue now is how many corals are going to succumb to their injuries over the next year, and how many corals were killed as a direct result of the storm,” Edmunds said. “If we were only able to come back next summer, then we wouldn’t really know what died because of their injuries caused by the storm, and what died from progressive injuries.

“It’s like being a forensic ecologist,” he said. “Basically, we’re walking around a murder scene, and we’re trying to figure out who did it, who crawled away and who survived.”

Edmunds and Lasker received a RAPID grant program from the National Science Foundation (NSF) program for this particular research project. Their team included CSUN marine biology graduate students Ashley Potter and Sigfrido Zimmerman. Their research was conducted in collaboration with scientists from the Woods Hole Oceanographic Institute and the National Park Service.

Edmunds and Lasker spent last summer doing research at the reef and did not expect to return until the summer of 2018. The NSF grant provided them a rare opportunity to document the impact of the hurricanes before too much time passed and their ability to assess the damage diminished.

“Some of the effects were exactly as we had predicted,” said Edmunds, who has spent 31 years studying St. John’s reef. “Giant waves do terrible, destructive things to coral reefs in shallow water. Everywhere we looked 20 feet or less under the water, there was extensive destruction: Sand scour. Broken coral. Soft sponges had been ripped off the bottom. Soft coral had been ripped off the bottom. In a few places, unbelievably, large granite boulders just rolled over. “In shallow waters, what we found certainly lived up to our expectations — holy, moly, this was bad news,” he continued. “But when we went deeper, it became more nuanced. It was still beautiful. There were corals, sea fans and some fish swimming around. Then you would look more closely, and you would see tumbled corals and missing corals in spots where you had seen corals just three months before. There were changes, but there certainly was a tremendous amount still there. I think it’s very encouraging.”

While encouraged, Edmunds noted the ecosystem was now more vulnerable.

“For one, there are a very large number of underwater projectiles now lying on the ocean floor that could cause damage,” he said. “It certainly wouldn’t take much for a future storm to pick up those pieces and pound them against the rest of the remaining reef. In that sense, the reef is more prone to physical damage… There are a lot of hammers sitting on the sea floor, ready to be picked up and thrown against the anvil.”

Edmunds had the opportunity to study the same reef in 1989, following Hurricane Hugo.

“At that time, I saw a lot of damage,” he said. “A lot of the boulders and corals that were broken off by that storm I thought were fine because that was 30 years ago and they are now concreted to the sea floor. Yet, with the most recent storms, some of the same boulders that were broken off 30 years ago became suspended in a water column and started moving around and turning over and pounding on the reef.”

Edmunds said people cannot expect coral reefs to respond to hurricanes the way they did 30, 50 or even 100 years ago.

“They are not the same reefs they were then,” he said. “And 100 years ago, the capacity of the reef to re-glue itself back together again was very much more well-developed than it is currently. Today, the cement that holds the pieces of the reef together is beginning to disappear. Once things are broken, there is less cement to hold them together, and the pieces have more of an opportunity to be shaken up and smashed together. That accentuates the danger from storms.”

Edmunds said what remains of the St. John’s reef is still quite beautiful, populated with an abundance of coral with the ability to reproduce, if given time. The problem, he pointed out, is what were once rare occurrences — Category 5 hurricanes — are expected by climatologists to become more frequent.

When it comes to the reefs, Edmunds said, the question is not “Are reefs going to disappear?” The bigger question is, “In what form will they exist?”

The variable is the planet’s changing weather patterns, he said.

“Based on what we know now, one can certainly identify the potential winners and potential losers among the corals on the reef,” he said. “The difficulty is that the ground rules under which the supposed winners and losers operate are changing. Who would have ever thought we’d have two back-to-back category 5 hurricanes? I am less convinced that just because you survived the last 20 years it’s a good indicator that you are going to survive the next 20 years. In my mind, who clearly are the winners and who clearly are the losers becomes much more uncertain.”