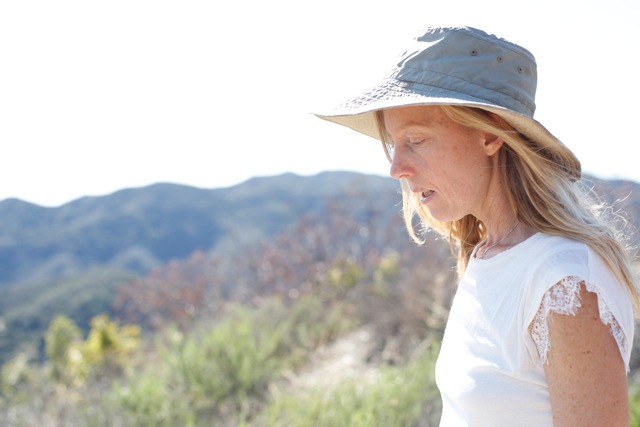 CSUN psychology professor Erica Wohldmann spent more than six months living off the land of the U.S.'s wilderness in 2012. She said she felt a deep connection to the Earth following her journey. Photo provided by Erica Wohldmann.

When the “noise” of our busy lives gets to be too much, most of us have a place where we go to get away from it all — that quiet corner in a backyard, a bench in the park with a great book, the living room couch nestled with a cup of soothing tea.

Wherever it is, California State University, Northridge psychology professor Erica Wohldmann, who spent more than six months traveling in and living off the United States’ wild lands in 2012, argues that our brains are still distracted — disconnected, actually — from their natural habitat.

“My research is about what happens to us when we become so disconnected,” Wohldmann said. “We spend 90 percent of our lives indoors. We’ve created this world with buildings and doors and fences, and we close each other off. There are all these little distractions that we don’t even notice, manmade sounds that we think we’re tuning out, but our brains are taking all that information and getting distracted by it.”

In May 2012, Wohldmann left urban civilization in her Volkswagen bus, boxes of books on wild plants in tow and with an excitement for returning to what she calls her “animal nature.” Her one rule was to not spend anything on food. For the next six months, Wohldmann would move through 16 different states and experience a deep connection to nature; her senses were heightened and she achieved what psychologists call “flow,” a mental state an individual gains from being completely immersed in the present, often leading to happiness and focus.

What she did not expect, however, was to go hungry on her first day.

“Well, you know, when you say something like ‘I’m going to live in the forest and feed myself wild food,’ you don’t know what it means until you’re in the forest,” she said. “The first day I found a bag of Doritos and a Dr Pepper. I don’t even eat that stuff. That isn’t food, but food-like products. I went, ‘Whoa, how am I going to do this?’”

The next day, her friend met her on his way back from a wedding and gave her leftovers from the celebration that would give her enough sustenance to survive while she settled down and read up on edible plants that she could forage.

“I got all my books out and I started reading and learning,” Wohldmann said. “I learned all about edible plants. I realized that there is so much [food] out there. I never have to worry about being hungry. I felt nurtured by the Earth.”

Wohldmann spoke of her experiences in the wilderness at the University of California, Los Angeles TEDx talk in early May.

More recently, Wohldmann’s journey to understand humanity’s connection to nature took her to Brazil’s rainforests, where she spent weeks under the tropical canopies communing with indigenous people.

The biggest contrast to living in the forests of Brazil compared to the U.S. plains was the food source and environment, she said.

“Here [in the U.S.] when I was foraging, I could live on greens and berries and acorns. I am not a meat eater regularly. But there, it would be really hard to survive without it,” Wohldmann said. “And there is a lot more danger. They have giant poisonous snakes and insects the size of your hand. They eat them. To think that people have lived that way for centuries is just incredible to me. It is something to protect.

“I think most people here in the U.S. think about nature as something that calms them down and relaxes them. [But] we have a perception that nature is capital. The people of the Amazon don’t view nature as a resource that can be bought or sold or owned,” she continued. “They have a more traditional view of nature — that it’s for everyone and for everything, and it should be protected and respected. The animals of the rainforest have equal rights to the land that we do. We don’t think that trees are there for the birds to have nests to have babies that will kill mosquitos. We don’t think about the web of life. We think about capital. When you think about nature, all of life, having the same rights that we do, it’s pretty powerful.”

Wohldmann said she hopes her research will educate and inform others about the benefits of reconnecting to nature through sharing her experiences.

“We have such potential to get connected to all the life around us. My goal as an educator is to make people think — to make conscious and thoughtful decisions,” she said. “That’s the whole purpose of education. The information that we provide for students should stand alone to convince people to change. I really hope that people who learn from me make informed choices. That’s the greater good, benefitting from the information I love to share.”