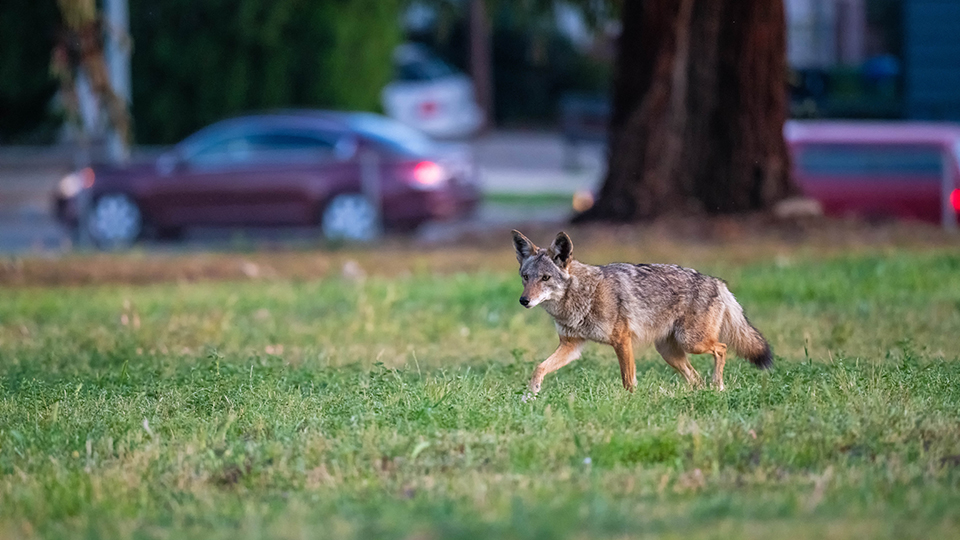 A coyote roaming through a Los Angeles neighborhood. A study by CSUN and National Park Service ecologists found that Los Angeles’ urban coyotes eat more garbage, fruit and domestic cats, and are less picky than coyotes living in the region’s suburban and rural areas. Photo by Tim Karels.

Los Angeles’ urban coyotes eat more garbage, fruit and domestic cats, and are less picky than coyotes living in the region’s suburban and rural areas, according to the results of a recently published study by California State University, Northridge and National Park Service ecologists.

CSUN biology professor Tim Karels and former biology graduate student Rachel N. Larson, who was the lead on the project, noted that coyotes are one of the most successful urban mammals, inhabiting almost every major city in continental North America, including Los Angeles. Their ability to live and thrive in the heart of the city relies, in part, on their diet. 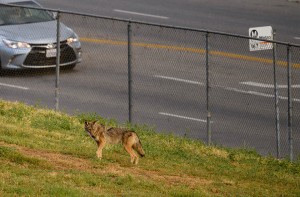 A coyote walking through a Los Angeles neighborhood. Photo by Tim Karels

“They are omnivores, which means they will eat practically anything that fits in their mouths,” Karels said. “Because they will eat anything, coyotes can live practically anywhere — from downtown L.A. to the urban neighborhoods around CSUN, to the mountains that surround the region and everywhere in between. While they eat a lot of garbage, they also eat a lot of the fruit found on the ground and, yes, domestic cats.”

The study, “Effects of urbanization on resource use and individual specialization in coyotes (Canis latrans) in southern California,” was published last month in Public Library of Science (PLoS) One, the international, open-access, online scientific journal. The study’s other authors include Justin L. Brown and Seth P. D. Riley of Santa Monica Mountains National Recreation Area, which is a unit of the National Park Service. The National Park Service has been studying urban coyotes since 2015.

To find out what exactly L.A.’s coyotes are eating, Larson, Karels and their collaborators, including a team of 150 citizen science volunteers, dissected the scat (the technical term for poop) found at sites across Los Angeles, Westlake Village and Thousand Oaks, They were looking for fur, feathers, bones, seeds, insect parts and anything else that could help identify what the coyotes were eating. 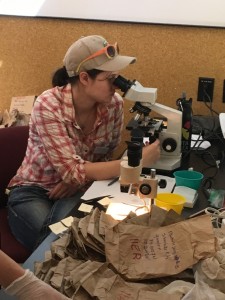 They also collected whiskers from coyotes captured by the National Park Service for other research projects and discovered as roadkill. They analyzed the whiskers for their stable isotope ratios — the ratio of variants of chemical elements that are heavier because they contain more neutrons in their nucleus. Larson explained that different plants have distinct carbon isotope signatures.

“What we were looking for was corn, which is very distinctive from plants naturally found in Southern California,” said Larson, who graduated from CSUN in May 2019 with a master’s in biology and is currently working on her Ph.D. in geography at the University of Iowa. “Corn is the base of the American diet. People eat corn. Corn syrup is used in many processed foods, including bread. Corn is fed to livestock and poultry, which humans, in turn, eat.

“If the coyote whiskers had high levels of carbon-13, which signifies the presence of corn, then it could only have come from coyotes eating lots of human food,” Larson said. “Needless to say, for those coyotes living in urban Los Angeles, we found they were eating a lot of human food, mostly found in the trash we humans leave behind.”

Larson said the researchers expected to find that urban and suburban coyote would eat human-related food. “We were just surprised to discover how much,” she said. 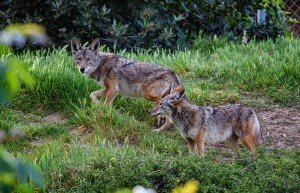 Los Angeles’ urban coyotes still eat rabbits and rodents, but Larson, Karels and their fellow researchers found that they also ate lots of garbage, ornamental fruits like figs and palm tree seeds, and domestic cats. Suburban coyotes had a seasonably variable diet, switching between eating their natural prey in the cooler, wetter winter, and eating ornamental fruits when they ripen in the summer. Rabbits, gophers and squirrels were important in the rural coyote diet, although the researchers do not have seasonal information from that area.

Karels noted that rural and suburban coyote tended to be picky, only eating a few different species. “Urban coyotes helped themselves to a little of everything at the prey buffet,” he said.

If Los Angelenos want to discourage coyotes from visiting their neighborhood, Larson and Karels recommended they secure their garbage, remove fallen fruit from their yards, and keep their cats and cat food inside.

“The thing is, everyone in the neighborhood is going to have to do this for it to work,” Larson said. “There is a reason why coyotes are in urban Los Angeles, and that’s because that’s where the food is. Coyotes are amazingly intelligent animals, and they are quick learners. If they know they can find food somewhere, they are going to stay there.”

Karels said Los Angelenos need to come to terms with the fact that their coyote neighbors, even in the wilds of downtown Los Angeles, are here to stay.

“Coyotes are part of the urban environment,” he said. “We’ve created this ecosystem, it’s a new ecosystem from an evolutionary point of view, but it is one that some species are quickly adapting to. Skunks, raccoons and opossums have all adapted to living in an urban environment. A carnivore, the coyote, has adapted as well.”