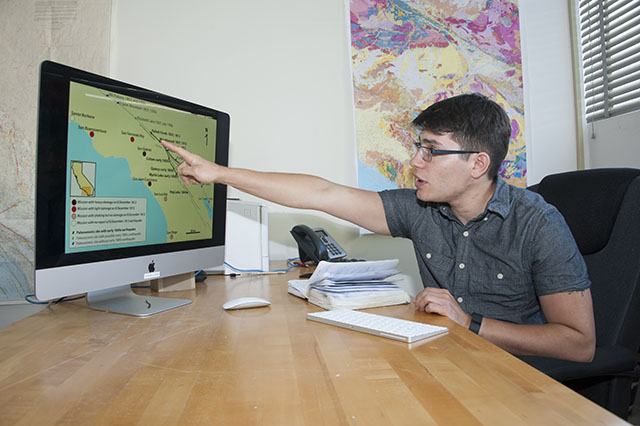 CSUN geology professor Julian Lozos demonstrates what California Missions had accounts of the earthquake of 1812 on a map. Photo by Luis Garcia.

California State University, Northridge geology professor Julian Lozos has a history with earthquakes. His research on a magnitude 7.5 earthquake that occurred in 1812 in the Inland Empire used historic accounts to help understand how fault lines affect not only the Earth, but life on it.

His study, published in the March issue of “Science Advances,” was based on a unique scientific approach that utilized historic accounts from Missions San Juan Capistrano, San Gabriel, San Fernando Rey and San Buenaventura, alongside custom-made computer simulations of fault activity on the San Andreas (SAF) and San Jacinto (SJF) fault lines to reproduce what seismic activity happened on Dec. 8, 1812.

Lozos’ study is one of the first to connect major earthquake phenomenon on the SAF, which runs north and south along California, to the SJF, which is smaller and runs northeast and southwest through Riverside County. His project provides proof that the 1812 earthquake may have caused damage in various Missions in the Inland Empire if the SJF ruptured first, and caused enough fault stress to make the SAF rupture as well.

“[The data shows that] the earthquake was in a different place,” Lozos said. “A way to explain [the ruptures] is that you could be driving on the [Interstate] 5, which is a long freeway. You can go a long distance on the I-5 by itself, or you could exit and go on [Route] 170 and still get to the same place.”

While the science behind earthquakes is interesting, exploring the human experience of them is just as important to understanding how they behave and affect people, Lozos said. Historic seismology, which uses historic documentation of earthquakes, provides a human perspective on how a large earthquake, like the 7.5 magnitude that occurred in 1812, might affect people residing in the Inland Empire in the present.

“This is a hazard we are talking about — a very real hazard,” Lozos said. “If this were to happen today in densely populated areas, it would be a massive disaster.

“Earthquakes are fascinating from a physics standpoint,” he continued. “But one of the things that makes [seismology] such an interesting and rewarding field to me is the way that it influences people,” he said. “The science is fascinating to me, but people living in earthquake country might not give a care about science. They certainly might give a care about their house breaking. There is something to be gained from that.”

Lozos explained that while his research looks at past earthquakes to understand current fault line activity, predicting the next earthquake is not yet feasible.

“I always make the point that this has nothing to do with timing,” he said. “We can’t predict earthquakes, nobody can. The best we can do is look at the statistics. But the idea that it happened once and it can happen again is a very real thing.”