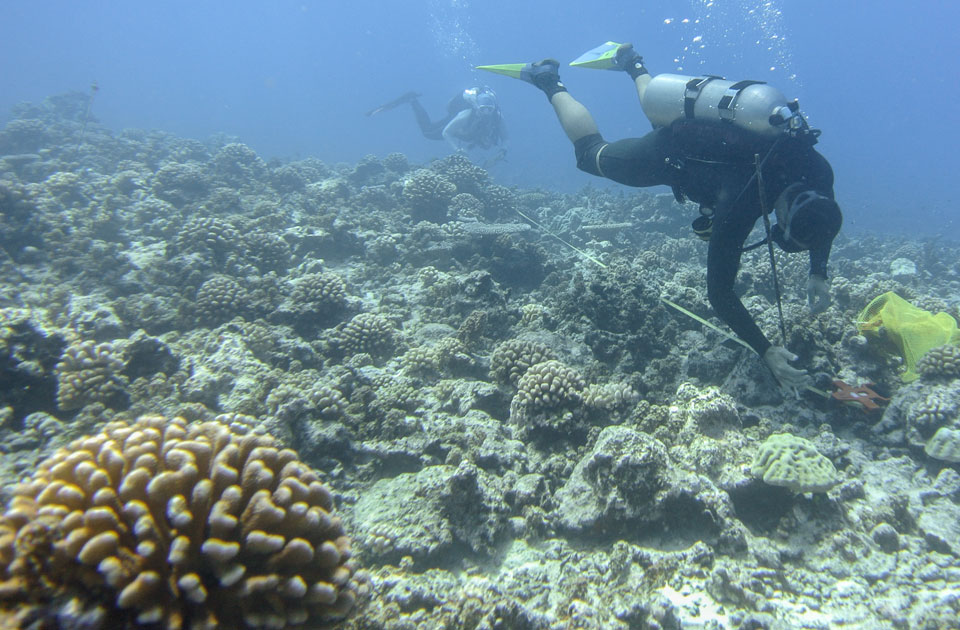 California State University, Northridge technician Sam Ginther and graduate student Megan Williams conducting surveys on the shallow reefs of Moorea in April 2018. Surveys such as these generate the raw data that support the synthetic analyses leading to the “oasis” paper. Photo by Peter Edmunds.

Amidst dire reports about the health of the world’s coral reefs, California State University, Northridge marine biologist Peter Edmunds and a team of researchers have found coral reef “oases” that provide hope that all is not lost for these beautiful ecosystems.

Edmunds and his colleagues have developed a framework for identifying specific coral reefs, “oases,” in the world’s oceans where corals appear to be thriving. They hope their findings — published todayin the Journal of Applied Ecology — will encourage further study into why these small communities of corals are surviving while so many more are not, and inspire efforts to identify similar oases in other ecosystems. CSUN marine biologist Peter Edmunds heading out to his field site in St. John, U.S. Virgin Islands, to begin the field sampling that provided the kind of data at the core of the paper. Photo by Chelsey Wegener.

“The reason why these oases are important is because the state of coral reefs over the last 20 years has been increasingly poor,” Edmunds said. “Over the last 12 to 24 months, bad news about coral reefs has appeared at an alarming rate, notably because of the severe coral bleaching that occurred on the Great Barrier Reef due to the 2016 El Niño. The overall message is ‘Oh my goodness, coral reefs all over the world are dying, and many have already gone.’ We felt there was a fragment missing from that story.

“There are still elements of hope in the form of coral reef oases,” he said. “This does not contradict reports of coral reefs suffering huge losses across the world and that the overall situation is very bad. However, there are kernels of hope in places where corals are doing better, or where they are doing less badly than elsewhere. These places provide a focus of attention that might be used to enhance coral conservation efforts.”

Jill Baron is founder and co-director of the U.S. Geological Survey (USGS) John Wesley Powell Center for Analysis and Synthesis, which funded the Working Group that led to the publication of “A framework for identifying and characterizing coral-reef ‘oases’ against a backdrop of degradation.”

She called the publication of the paper, “momentous and encouraging. The state of the biosphere is declining in many places, but increasing understanding of why oases like these persist will help us protect and even restore coral reefs.”

Dan Thornhill, program director in the National Science Foundation’s Division of Ocean Sciences, which fundeda substantial portion of the ecological investigations upon which this synthetic study is based, underscored the importance of the findings in the journal article. Giant Elkhorn corals (Acropora palmata), such as this colony from about three meters depth in St. John, are some of the most beautiful and important corals that have become lost as many reefs reefs in the Caribbean have degraded. This colony was photographed in 2015 and it was killed by Hurricanes Irma and Maria in September 2017. Photo by Peter Edmunds.

“Coral reefs are in rapid, global decline,” Thornhill said. “This timely and much-needed paper identifies coral reefs that are doing better than most, places that may provide a refuge against the worst effects of climate change.”

The National Science Foundation supported the research described in this study that was completed in Moorea, through the Moorea Coral Reef Long Term Ecological Research site, and in St. John, through its Long Term Research in Environmental Biology program.

The 18 researchers have extensive knowledge about the conditions of coral reefs in two key regions of the world’s oceans, the Pacific and the Caribbean. With support from the USGS John Wesley Powell Center for Analysis and Synthesisthey spent a year and a half meeting in person and online to synthesize results. They have developed a framework for identifying oases within four coral reef regions that have been studied for decades, in many cases by many of their own team members. Their framework considers the health of coral communities, how often they had been disturbed, and how long they had remained in a healthy (or unhealthy) state.

“We were able to bring information together from a large array of places, something not possible just 10 or 20 years ago,” Edmunds said. “We were able to step out from our own field sites where we conduct our research and ask grander questions. We were able to take what we know from each location, combine it with a breadth of information from other locations, and reach grander conclusions about what is going on.” A shallow cora reef (about 10 meters in depth) on the north shore of Moorea, French Polynesia, in April 2018. This reef has rebounded from catastrophic damage in 2010 and, as this picture shows, part of the sea floor are almost fully covered by live coral. Photo by Peter Edmunds.

Working together, the researchers were able to identify 38 oases that they categorized as either “escape,” “resist,” or “rebound” oases.

Edmunds, who studies coral reefs in St. John, U.S. Virgin Islands (in the Caribbean), and in Moorea, French Polynesia (in the Pacific), said he has been “blown away” by the capacity of the reefs in Moorea to rebound following devastation.

“We started working there in 2005, and almost immediately encountered hordes of coral-eating sea stars that quickly consumed the tissue of the corals,” he said. “By 2010, there was as close to zero coral on the outer reefs as I have seen in my entire career. And yet, within eight years, that coral has regrown. In places, about 80 percent of the sea floor is now covered by live coral. It is a remarkable example of an oasis.”

Given the 38 oases the researchers have identified, Edmunds said it is logical to assume that there are more coral oases in the rest of the world’s oceans.

“Now an oasis, to some extent, is in the eye of the beholder,” Edmunds said. “These are not necessarily large areas of reefs. Some of them are very small, only a few hundred meters in size. There are tens of them in the places we investigated, but we did not set out to look at the entire world.”

By definition, Edmunds pointed out, an oasis is a rare occurrence in a dire landscape.

“There are a small number of examples of healthy reefs amidst an otherwise dark landscape of dying corals in the world’s ocean,” he said. “This project was an effort to see where these sites could exist, and whether coral within them could withstand present-day stressors. We spent a lot of time working on this, and we are optimistic that our coral reef oases are signs of good things in the future, rather than the last gasp of a dying ecosystem. A shallow coral reef, about eight meters deep, on the north shore of Moorea, French Polynesia, in April 2018. This reef has rebounded from catastrophic damage in 2010 and in places now has about 70 percent of the sea floor covered in live coral. Photo by Peter Edmunds.

“Coral reefs have been called the charismatic poster child of environmental degradation,” he continued. “They are like polar bears in the Arctic. Coral reefs, which are stunningly beautiful, are things that people can relate to and understand. This present era has been called the Anthropocene, because human influences finally are affecting virtually every aspect of the biological world, usually in negative ways. Coral reefs can play a very important role in conveying this important message: They have the power to inform and excite people in positive ways that can promote action leading to protection of the environment.”

Edmunds said he hopes the journal article will provide conservationists and policy makers with a tool that can be used to identify areas that warrant stronger protection.

“Our method for detecting oases provides a way to demonstrate that select areas are environmental gems deserving of greater protection,” he said. “Countries all over the world have marine protected areas and parks, and they all face the dilemma of where to locate them and how best to allocate limited resources to protect them. The identification of ecological oases promotes a healthy consideration of the effectiveness of protecting a single species versus areas of ecosystem in which they live; if oases are persistent they might offer the best chance for many species of animals and plants to survive.

“I don’t think the solution to our current environmental challenges is building a Noah’s Ark, and wrestling with which species to protect and which to leave to extinction,” he said. “Identifying and protecting ecological oases, such as the ones on coral reefs we describe in our new paper, offers a more realistic opportunity to protect swaths of intact ecosystems that might be able to catalyze broader ecosystem recovery.

“It’s a fascinating time to be a biologist,” Edmunds added. “I find myself repeatedly trying to balance paying respect to how much of the natural world we have lost with the notion that ecological oases can still be found. The existence of such oases doesn’t make our environmental problems go away, but they do suggest there is still hope for a better future. How best to turn that hope into a reality remains an unknown challenge.”