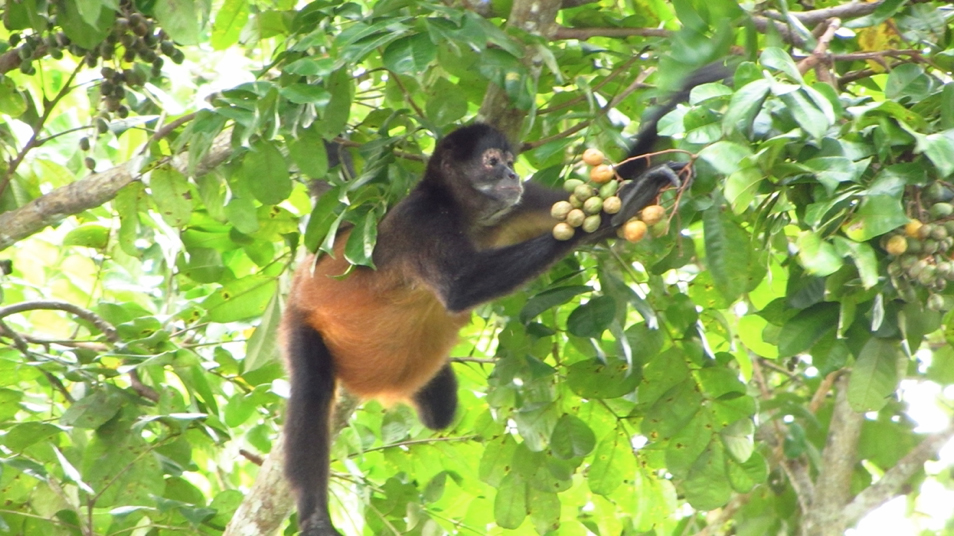 A new study of spider monkeys by CSUN anthropology professor Christina J. Campbell and graduate student Victoria Weaver sheds light on the theory that the human inclination to drink alcohol may have its roots in our ancient ancestors’ affinity to consume fruit so ripe that it had fermented enough to create ethanol. Photo courtesy of Christina J. Campbell.

Scientists have hypothesized that the human inclination to drink alcohol may have its roots in our ancient ancestors’ affinity to consume fruit so ripe that it had fermented enough to create ethanol.

A new study by California State University, Northridge anthropology professor Christina J. Campbell and graduate student Victoria Weaver gives credence to that theory. They spent months studying black-handed spider monkeys in the wild on Barro Colorado Island in Panama, and found the animals preferred fruit that contained ethanol, a by-product of fermentative yeasts within fruit pulp that metabolizes sugar in the ripening process.

“For the first time, we have been able to show, without a shadow of a doubt, that wild primates, with no human interference, consume fruit containing ethanol,” Campbell said. “This is just one study and more need to be done, but it looks like there may be some truth to that ‘drunken monkey’ hypothesis — that the proclivity of humans to consume alcohol stems from a deep-rooted affinity of frugivorous (fruit-eating) primates for naturally occurring ethanol within ripe fruit.”

The results of her study, “Dietary ethanol ingestion by free-ranging spider monkeys (Ateles geoffroyi),” appeared this month in the journal Royal Society Open Science. Her co-authors include Weaver and Aleksey Maro and Robert Dudley, integrative biologists at the University of California, Berkeley.

Campbell and her fellow researchers studied black-handed spider monkeys as they foraged for fruit. They watched as the monkeys smell-tested the fruit before making their selections.

The researchers also collected urine samples from the monkeys to test for traces of ethanol, and they found that five of six samples would test positive.

“The monkeys were likely eating the fruit with ethanol for the calories,” Campbell said. “They would get more calories from fermented fruit than they would from unfermented fruit. The higher calories mean more energy.”

She noted that much of the black-handed spider monkeys’ natural habitat is under threat of deforestation, making it harder for them to find food. It is important that they get as many calories as they can from the food they do find.

That need for high caloric intake may have influenced human ancestors’ decisions when selecting which fruit to eat, Campbell said.

“Human ancestors may also have preferentially selected ethanol-laden fruit for consumption, given that it has more calories,” she said. “Psychoactive and hedonic effects of ethanol may similarly result in increased consumption rates and caloric gain.”

Campbell and her fellow researchers argued that contemporary patterns of alcohol consumption, in turn, may derive from these ancestral associations between ethanol and nutritional reward.

“Excessive consumption of alcohol, as with diabetes and obesity, can then be viewed conceptually as a disease of nutritional excess,” she said.