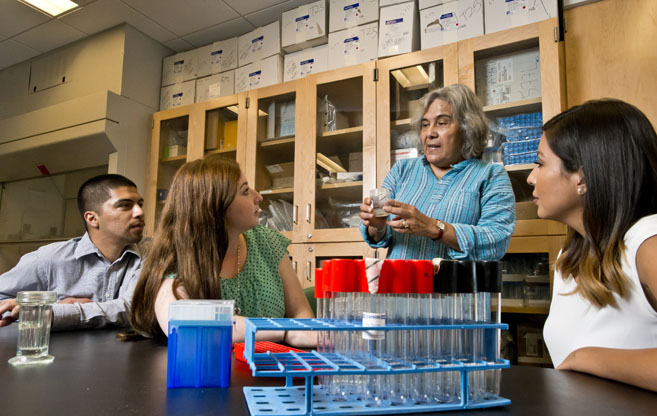 In honor of National Hispanic Heritage Month this fall, the online resource Cell Mentor named CSUN biology professor Maria Elena Zavala to its list of the 100 most inspiring Hispanic/Latinx scientists working in the United States. The honorees were selected by Cell Press journal, based on scholarly achievements, mentoring excellence, and commitment to diversity, equity and inclusion, according to the publication.

“Our aim in assembling these names is to put an end to the harmful myth that there are not enough diverse scientists to give seminars, serve as panelists or fill scientific positions,” the authors wrote. “We hope it will help to change the perception of what a scientist looks like and makes our collective image more representative of society at large.”

Zavala, who has taught at CSUN since 1988, was the first Mexican American woman in the country to earn a Ph.D. in botany. Since coming to CSUN, she has played an integral part in building the national reputation of CSUN’s Department of Biology as a place where students, particularly those from underserved communities, thrive and successfully pursue advanced degrees at top-tier research institutions.

She has served as director of CSUN’s Maximizing Access to Research Careers Undergraduate – Student Training in Academic Research (MARC U-STAR) program since 1990 and Research Initiatives for Scientific Enhancement (RISE) since 1993. Her work as a mentor and advocate for countless students who have gone through these programs earned her recognition from the White House. In 2000, Zavala received the Presidential Award for Excellence in Science, Mathematics and Engineering Mentoring from former President Bill Clinton. And in 2017, Zavala was named the first Latina Fellow of the American Society of Cell Biology in its 57-year history.

She also oversees CSUN’s work as one of three institutions sharing a first-of-its-kind $3 million, five-year grant from the National Science Foundation to create a Hispanic-Serving Institutions (HSI) Resource Hub. The hub is charged with reaching out to colleges and universities across the country to build partnerships that will support STEM education, increase STEM research and education capacity at HSIs, and encourage the implementation of cutting-edge training.

“To be named a Fellow is a recognition of your research and the contributions you have made to a particular field of study,” Zavala said in 2017. “It’s nice recognition from your peers. But I am looking forward to the time when I’m not the first, but one of several Latina Fellows.”