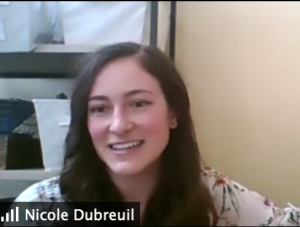 CSUN student Nicole Dubreuil, a 2021 Roy and Roxie Campanella Scholarship recipient, knew as far back as elementary school that she wanted to be a physical therapist.

At the 2021 Campanella Scholars virtual award ceremony on Feb. 5, she described witnessing as a youth how her grandmother, a Greek immigrant who spoke no English, was neglected while being ill in the hospital. She also later witnessed how a CSUN physical therapy graduate helped her grandmother regain and maintain her independence.

Since then, Dubreuil knew what her future had in store. She recalled sharing with her family what she wanted to do with her life.

This is just one of the inspirational stories and expressions of gratitude shared by the 10 Campanella Scholarship recipients.

Representatives for the Los Angeles Dodgers Foundation, the Roy and Roxie Campanella Foundation, CSUN’s College of Health and Human Development, and the Department of Physical Therapy gathered over Zoom to honor the hardworking physical therapy students who earned this award.

“Physical therapy school is extremely challenging and extremely expensive, and this helps tremendously,” said Aimie Kachingwe, professor and interim chair of the Department of Physical Therapy. “We are so incredibly grateful for both the Dodgers Foundation and the Campanella Foundation that they have done this, and that they continue to do this every year because it honestly makes a huge difference.”

This scholarship was created in memory of baseball legend Roy Campanella by his wife, Roxie Campanella, a few years after his passing in 1993.

In 1948 Campanella was signed by the Dodgers, becoming the first Black catcher in Major League Baseball history. The powerhouse led a very decorated career. He was named MVP three times, played in five World Series and was inducted into the Hall of Fame in 1969.

At the age of 36, his 10-year baseball career ended after a car accident left him paralyzed from the neck down. It was through physical therapy that Campanella found a light at the end of the tunnel.

“My father always credited the physical therapist as the person who helped him gain his will to live again,” said Joni Campanella Roan, the daughter of Roy and Roxie Campanella, in a video presentation during the event. “The physical therapist helped my father become independent. He helped him regain some of his movement through exercise and determination. He helped my father see that he could have a second life.”

CSUN’s three-year physical therapy doctorate program prepares its students with the skills, technique and experience to make a difference in the lives of their future patients, but it is evident that their passion and drive to become healers and agents of change is inspired by their diversity.

“It is always such an honor for me to be part of this,” Campanella Roan said. “This event is extremely special to me because it’s through [the students] that my parents’ dreams continue to live, to have physical therapists who are sensitive to people from diverse ethnic and cultural backgrounds.”