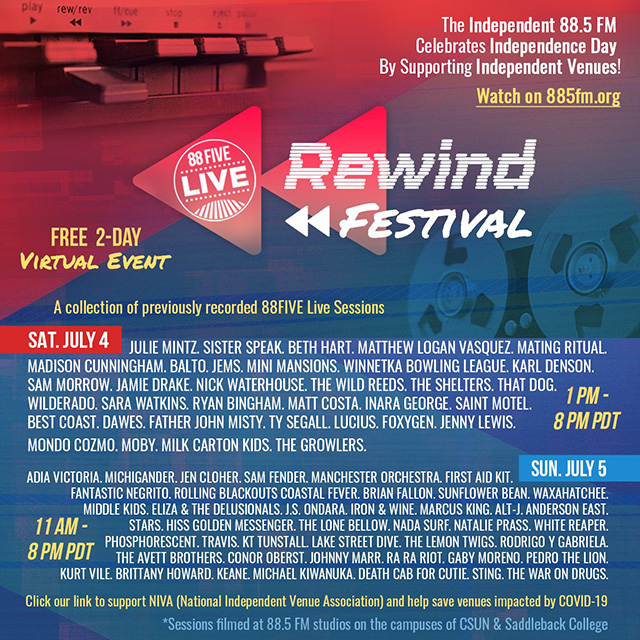 88FIVE-Live Rewind can be found beginning on Independence Day on the 88.5 website, www.885fm.org, or the station’s YouTube channel, 88.5 FM Southern California. The virtual festival will feature a collection of previously recorded live studio sessions by artists such as Nick Waterhouse, Dawes, Mondo Cozmo, Moby, alt-J, Johnny Marr, Death Cab for Cutie and Sting.

Over the course of the two days, the festival will showcase dozens of live performances by 77 bands, curated by legendary DJ Nic Harcourt, host of the station’s morning broadcast, with the help of engineer Tristan Dolce. The festival is scheduled to begin at 1 p.m. on Saturday, July 4, and culminates at 8 p.m. on Sunday, July 5.

“The purpose of the 88FIVE-Live Rewind virtual music festival is twofold,” said 88.5-FM General Manager Patrick Osburn. “First, to celebrate the station’s commitment to promoting local and national emerging artists. Second, and equally important, we want to reinforce the importance of supporting the local, independent music venues and clubs that are the backbone of the Southern California music scene. These independent venues are a staple of the music industry, and they have suffered alongside artists during the COVID-19 shutdowns.”

Osburn said the festival’s audience will be invited to learn more about the National Independent Venue Association, a nonprofit organization working to save those venues impacted by COVID-19, and given information on ways to support independent venues.

The two days will include performances recorded as part of 88FIVE Live In-Studio Sessions and 88FIVE Live Sessions on location at various venues around Southern California.

“We have been waiting for the right time to put this priceless content to good use,” Harcourt said. “I knew, deep down, we would eventually have clarity on how these performances would be re-purposed to benefit a lot of people and organizations.”

Program Director Marc “Mookie” Kaczor noted that independent radio, artists and venues “are truly all in this COVID-19 crisis together.”

“I am very proud that our programming and production team had the foresight collect these priceless performances,” he said. “Artfully piecing them together for this great cause is a win for the audience and the industry. Independence Day weekend is the perfect time to release the 88FIVE-Live Rewind festival. We hope to assist as many suffering venues and musicians as possible.”

The station is a combined effort of California State University, Northridge (CSUN) and Saddleback College, which began simulcasting as 88.5 FM in October 2017, linking the Los Angeles County- and Orange County-based signals. The station’s Triple-A programming is available on the KCSN and KSBR 88.5 HD1 channels, via the 88.5 app, and online at www.885FM.org.