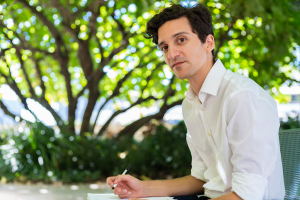 This young creative has formed a well-rounded worldview that led him to work with clients twice and, sometimes, three times his age: He’s taught local senior citizens the complexities of social media with his nascent business venture, “Become an InstaGrandma,” while pursuing his passions for writing and film.

Needle is a born comedian and seems drawn to snark:

His comedy short film, “Fred,” about an awkward meet-the-parents dinner, was an official selection at the Cambria Film Festival and the Simply Indie Film Festival, as well as a special mention in the London-Worldwide Comedy Short Film Festival in 2018.

He’s proud of his multitasking and prolific nature, Needle said.

“Everything is ‘figureoutable,’” he said, quoting motivational speaker Marie Forleo. “You can do anything, you can do everything, you just can’t do it all at the same time.”

Since childhood, Needle has been steeped in education and teaching. Both of his parents are K-12 teachers in the Los Angeles Unified School District, and he was motivated to follow in their footsteps by pursuing education himself. He even jumped on an opportunity to teach middle school students, as well as teaching for the Summer Institute for the Gifted, held at UCLA.

He landed his first paid teaching gig during his undergraduate years at CSUN: He was hired to tutor an elderly man in home computer use. The man wanted to learn how to type so he could write his memoir on dealing with Parkinson’s disease, Needle said. The young tutor taught his student to type, and then helped him complete the memoir.

Almost ten years after this experience, Needle searched for his next opportunity, listening to countless business startup podcasts for entrepreneurial inspiration. Then, by chance, a random encounter sparked an idea. “In one week, I had two different experiences where an older person would flag me down and say, ‘Hey, you look like you’re good with technology. Can you tell me how to do XYZ?’” Needle said. “I said to myself, ‘If this is going to keep happening, I should see if I can turn this into a business.’”

This Idea materialized into his educational service, “Become an InstaGrandma,” which helps senior citizens master, or at least manage, the art of social media and modern technology. His services include private sessions, social media workshops and hardware and software set-up packages that smooth the transition for offline individuals into the world of social media — such as account creation and establishing reliable security measures.

Needle admits that the COVID-19 pandemic threw down unexpected obstacles — even at a time when isolated seniors may need social media and virtual “connections” more than ever. This spring, he put his venture on a brief hold but plans to revamp it once some restrictions are lifted.

“Some people, regardless of age, are going to need the extra help and be more willing to ask for it,” Needle said. “I think the best course of action for this business is to wait for the ‘Safer at Home’ order to be lifted, then to advertise and see what happens next.”

Needle said he’s been gratified to have helped dozens of seniors “Become an InstaGrandma” before the pandemic hit, and they found themselves sheltering in place, adjusting to a more virtually connected world.

The years Needle spent at CSUN weren’t easy, but they helped him further develop the mental toughness he needed to navigate an unpredictable entertainment world, he said. As a student in CSUN’s Department of Cinema and Television Arts, he saw his fair share of tough internship experiences.

He recalled one internship where he had to decide whether to stay and take an unpaid, higher-level position with a greater time commitment or search for other opportunities elsewhere. He decided to strike out on his own, an uncommon but self-assured move for a budding filmmaker. 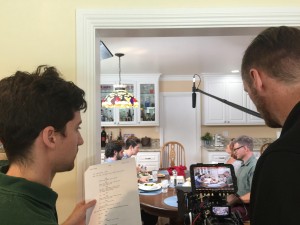 “Just figure out what you want, and then go for it,” he said of his learning curve in the film industry. “Even the bad learning experiences during internships can be good, because you end up realizing, ‘I am never doing that again,’ or ‘I must really want to be here because I put up with that and I’m still here.’”

Now eight years after graduation, Needle said he sees clearly the professional value of attending CSUN, as the school is repeatedly ranked as one of the nation’s best film schools by Variety Magazine.

“CSUN actually gave you the option of having a life outside of school and doing other things,” including encouraging hands-on learning and practicum opportunities, he said.

This spring, his thoughts turned to the Class of 2020, and he offered some insights on what he’s learned from film, writing and “InstaGrandmas” alike:

“You’re already in the real world, don’t let people tell you otherwise,” Needle said. He advised aspiring filmmakers, writers, actors and other creatives not to wait until after graduation to get started on a career.