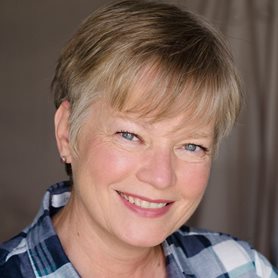 Gusts of wind swirl around a living room seance, a blonde woman zealously leading the group as she calls to the “great spirits of the netherworld.” Two spheres of light whiz above them, and the ghosts of Bill S. Preston, Esq., and Ted “Theodore” Logan appear with a greeting: “How’s it going, New Age dudes?” The spirit-seekers gasp.

Below the 8-foot fan giving the film set its ghostly effect, Amy Stoch ’03 (M.A., Theatre History) — who plays the role of Missy, Bill’s young stepmother and the blonde seance leader — and the rest of the cast break from their strange characters and burst into laughter.

The scene takes place in “Bill & Ted’s Bogus Journey,” the sequel to the 1989 cult classic “Bill & Ted’s Excellent Adventure,” which starred Keanu Reeves and Alex Winter as best friends from San Dimas who go on a quest through time to pass their history class and start a rock band.

Since “Bogus Journey,” Stoch has gone on an excellent adventure of her own — one that has taken her through an acting career, earning a master’s degree at CSUN and a doctorate at the University of Illinois, then on to teaching in Los Angeles as an adjunct instructor. Now, she is returning to the screen to reprise her role as Missy in the beloved “Bill & Ted” series’ upcoming third installment, “Bill & Ted Face the Music.”

On June 9, Orion Pictures dropped the first official trailer for the film, scheduled for release in August. 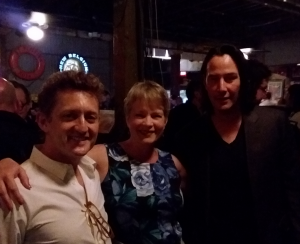 “I went through the roof practically when Scott [Kroopf], the producer, called me and said, ‘Yes, we’re finally doing this,'” Stoch said. She said she’d been hearing about a possible third movie for six years.

When filming began in July 2019 in New Orleans and Stoch had to revisit a character she first met 30 years ago, she said, “It was like riding a bike. It was like being back in my hometown. I loved it. I loved my character. I had fun with her.”

Despite “Bill & Ted” being widely hailed as a classic, Stoch said she and everyone else on the project didn’t expect it to have such a loyal, large following that would stick with the franchise decades later.

“We were just there as young actors having a blast, shooting the film, this cute little film,” Stoch said. “This whole series is like a Cinderella story — all three of these movies have started in the ashes and gone to the ball.”

Stoch got her start in professional acting after competing in “Star Search,” where she reached the semifinals in the spokesmodel category. When she got cut in the semifinals, one of the judges, Sue Cameron, offered to represent her as an agent and got her auditions through the 1980s.

Along with the first two “Bill & Ted” movies, Stoch landed roles in four of the iconic Western “Gunsmoke” films and in celebrated TV series including “Days of Our Lives,” “Dallas,” “Murder, She Wrote” and New Form Digital’s “Mr. Student Body President.”

After playing myriad roles as an actor, Stoch took on a whole new one — as an educator.

By the late 1990s, Stoch said, “I was still working quite a bit commercially, but theatrically, things had dropped off quite significantly. At that time, I kind of saw the writing on the wall. And I went, ‘You know what? I’ve always loved education and research.'”

In 1998, while raising her 5-year-old son, she decided to enroll at CSUN to get a master’s degree in theatre history, in hopes of teaching later on.

With the help of her advisor, CSUN theatre history professor Ah-Jeong Kim, Stoch wrote her thesis on the history of theatre in higher education in the United States. She took her doctoral program at the University of Illinois at Urbana-Champaign, where she wrote her dissertation on the work of theatre director and theorist Herbert Blau. 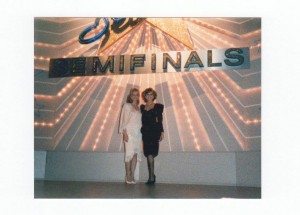 Amy Stoch at the semifinals of “Star Search.” Photo courtesy of Amy Stoch.

Now with her Ph.D. in hand, Stoch is an adjunct instructor at The American Musical and Dramatic Academy (AMDA), Loyola Marymount, New York Film Academy (NYFA) in Los Angeles and Concord University in West Virginia. She teaches classes on acting for the camera, as well as GE subjects such as oral communications and politics in plays.

As an acting instructor, Stoch said, she encourages students to become “smart actors” that understand how to add depth to the characters they play as well as the business of theatre and film.

Stoch said she never thought she’d pursue a career in academia. “My dream since I was in second grade was to be an actor,” she said.

But just like Bill and Ted traveling through time in a magic phone booth, not knowing where they’ll land next, Stoch said she “just kind of went from one thing to the next, and then it just started happening.

“You don’t ever know who you’re going to meet out there, or what direction they may take you in,” she said. “So, be open to everything.”