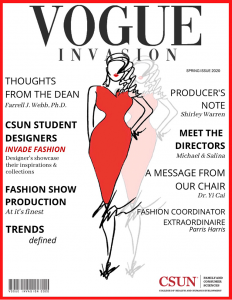 Flip through the collections by the Apparel Design and Merchandising seniors, and you’ll find a blend of sleek and quirky, minimal and daring, and everything in between. And each piece was ready to shine on the runway.

Upon CSUN’s announcement of its move to virtual learning for the remainder of the spring semester, the annual TRENDS fashion show, where these seniors exhibit their work and compete for a grand prize, was canceled. But Shirley Warren, professor of apparel design and merchandising, and her students weren’t going to let these runway-ready designs to go to waste.

Warren and her fashion production class pulled together, and they translated the show’s program into a magazine that features the senior students’ stunning designs. “Vogue Invasion,” named after the theme of the canceled show, emulates a commercial magazine with pages dedicated to the student designers’ individual collections.

“When you look at the collections, you’ll see they’re all different,” Warren said, recalling what she wrote in the magazine’s welcome page, “but they’re similar in showing how the students pushed themselves past hurdles and obstacles to create stunning collections.” 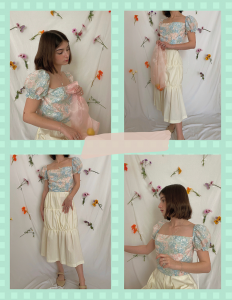 Without any models to dress with their creations, the designers had to get creative. Some used mannequins, some enlisted family members and some modeled their designs themselves. To elevate their submitted photos, some even chose shoot locations or decorated their backgrounds that suited their collections’ looks.

Each section in the magazine is tailored to the collection and designer it features. Multicolored pages accompanied the photos of vivid, polychromatic pieces, while streamlined layouts complemented the sleek, elegant designs. What resulted are pages that are uniquely personal — perfectly fitting for the “Vogue Invasion” theme, which reflects weaving in personal aesthetics “taking over” the world of fashion.

“We weren’t going to highlight someone’s wedding dress in the same background as someone’s suit,” said Lexie Rumpel, an apparel design and merchandising senior who designed the magazine pages and illustrated the front cover. “We didn’t want everyone’s pieces to just blend in with everyone else — we wanted to give everyone the spotlight.” 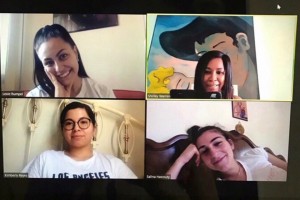 An online meeting with professor Shirley Warren and the magazine “Zoom squad.”

Behind the scenes were students Rumpel, Kimberly Reyes and Salina Hasrouty — Warren’s “Zoom squad,” a name conceived after hours of planning and collaborating over the online conference platform. They were students in Warren’s fashion show production class and initially worked on planning and preparing for the show. But for the magazine, the trio became an editorial team, assisting Warren by leading their classmates in contacting the designers, collecting images and bios, and designing the layout of each page.

“Being a part of the making of ‘Vogue Invasion’ was an absolute wonderful experience,” Reyes said. “It challenged my creative thinking and it taught me to be patient when times seemed never-ending.” 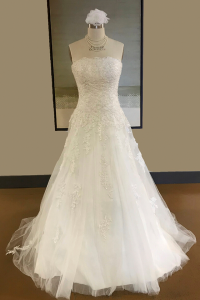 Warren commended her “squad,” saying they went above and beyond by volunteering to work past their final undergraduate semester to ensure the magazine is complete and digitally accessible.

While the CSUN community will be able to peruse the magazine virtually, Reyes and the other students and faculty involved will receive physical copies. Reyes had the opportunity to get her hands on the magazine early. Upon seeing it, she said, “All I can say is our hard work definitely paid off.”

Despite the show’s cancelation, the magazine also celebrates the time and effort students already put into it. Pages feature images and write-ups about the completed model call, the V-shaped stage design, and the handmade “It Girl” Barbies — Barbie dolls of different ethnicities wearing their own iconic red dresses — that would’ve made up the centerpiece during the show. 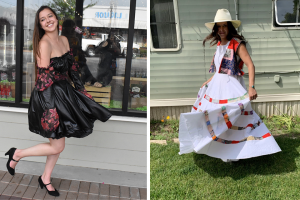 “Nothing is ever set in stone, and the changes are going to come without you ever knowing,” said Hasrouty, who served as one of the fashion show directors. “So, the fact that we were able to switch up so quick was super cool. Nobody really stopped and asked questions. We just switched it up and we just did it.”

“The students were extremely resilient,” Warren said. “They adjusted — that says it all. They pushed themselves beyond their limits to create their vision of ‘Vogue Invasion.'”