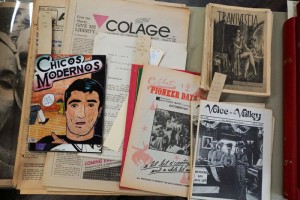 Archived records and documents paint a detailed picture of how society functioned in the past, so we can better understand how society functions in the present. For many marginalized groups, historical records are sporadic and largely incomplete, including those for the LGBTQ community.

The Oviatt Library’s Special Collections and Archives at California State University, Northridge is exploring ways to reconnect students and the community with LGBTQ history. The library’s extensive collection includes thousands of periodicals, newspapers and magazines that highlight the hardships and triumphs of queer culture in Los Angeles. 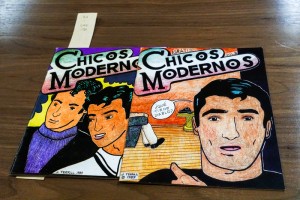 “What we are trying to collect is a body of materials that documents human sexuality and gender, throughout various periods of time,” said Ellen Jarosz, head of special collections and archives. “The collection focuses heavily on LA, which has had a pretty significant role in the history of the queer community in our country.”

Much of the evolution of the gay rights movement today is deeply rooted in violence that criminalized queer citizens.

The 1969, New York’s Stonewall uprising – a riot against police harassment of gay individuals at a gay club – often overshadows the rich history of the gay rights movement that originated in LA during World War II.

“Our entry into World War II saw a population of gays and lesbians that were freed from their biological families and hometowns for the first time,” said Marie Cartier, professor of Queer and Women Studies at CSUN, who regularly utilizes the collection with her students. “This sparked many gay bars to open across the United States as meeting grounds for gays and lesbians during the 40s.”

“The big difference with LA. as opposed to other cities at the time, was the movie industry,” Cartier said. “The amazing collection of artists, actors, painters provided a much freer and more accepting community than other cities.”

In the 1950’s the gay liberation movement in Los Angeles was propelled forward by an American Psychologist named Evelyn Hooker. Her work argued the false correlation between homosexuality and mental illness that was historically attributed to gay individuals.

“She was the first to do research on gay people who were not defined as being mentally ill,” Cartier said. “Up until that time, anybody who had been in a psychological study already

Numerous essays and texts authored by Hooker can be found in the Oviatt Library’s special collections and archives. 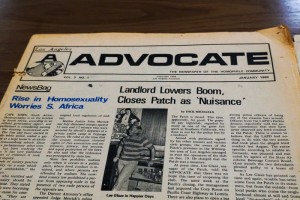 Much of the documentation available at the Oviatt Library’s special collections and archives highlights many of the early organizations that helped propel the gay liberation movement. The Advocate gave birth to the first gay newspaper magazine in 1967.Shortly after the creation of The Trevor Project in West Hollywood in 1998, provided the first suicide prevention line for LGBTQ individuals.

Other notable materials available in the collection include issues from “Chicos Modernos” – a Spanish comic series that emphasized safe sex for men – “Everywoman” – a feminist periodical empowering women. Additional materials also include hundreds of physical documents from the Homosexual Information Center – a non-profit organization committed to gathering and disseminating data to the public regarding aspects of homosexuality.

At CSUN, instructors like Cartier are encouraging and even mandating their students to visit the special collections and archives at the university.

“The special collections and our sex and gender collections is one of the most renowned collections in the nation,” Cartier said. “It’s vital for our students to be exposed to this material. People need to be able to see their history and sometimes even physically hold the history,” she added.

According to Jarosz, the collections and archives get widespread use across various departments and major on campus.

“The body of materials here at CSUN is wholly unique and are relatively easy for students to take advantage of,” Jarosz said. “People travel here from all over the country and sometimes international to see our collection, so if you live here and go to school here take advantage,” she added.

For more information about the special collections and archive please visit: https://library.csun.edu/SCA