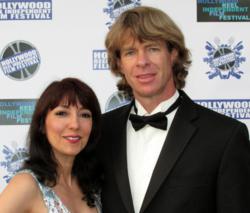 One of the hottest screenwriting teams currently working has some Matador DNA in it. California State University, Northridge psychology professor Luciana Lagana and her husband, actor Gregory Graham, have just won the Award of Excellence in Screenwriting at the 2013 Canada International Film Festival for their screenplay “Old River Road.” It is their second nomination for the script, coming on the heels of their nod for a 2013 L.A. Screenplay Competition award.

The talented duo have also captured nominations for best teleplay at the 2012 Los Angeles Screenplay Competition and the 2012 Hollywood Screenplay Contest for their story “Soup Kitchen,” based on the hit TV show “Californiacation.” It’s all a rush for Lagana, who has also acted in feature and television, along with her tenured position at CSUN.

“It is fun to get to write with my husband,” Lagna told PR Web. “We have such opposite writing styles! It is very interesting to see how the story develops and ends up containing a combination of both of our visions.”