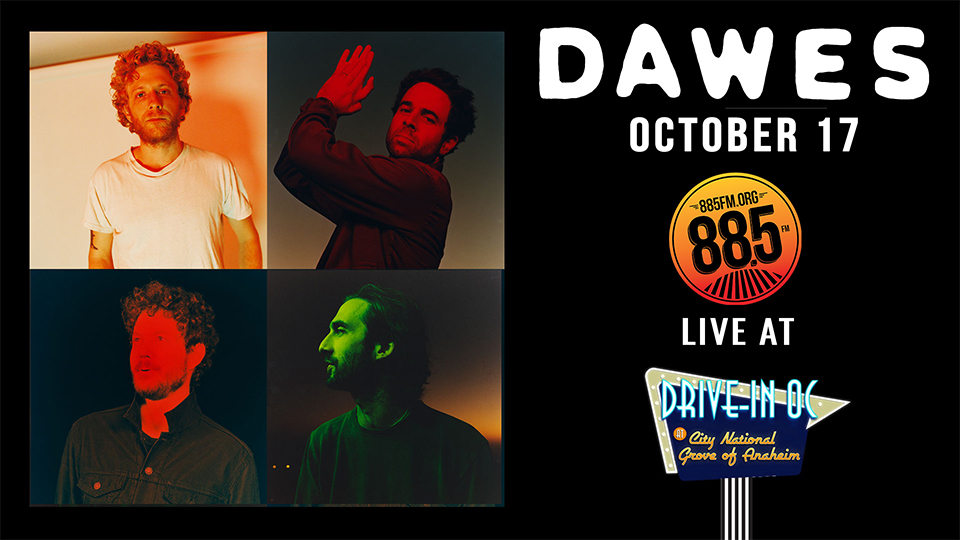 Dawes will perform songs from its new album, “Good Luck With Whatever,” as part of 88FIVE LIVE at Drive-In OC at City National Grove of Anaheim on Oct. 17.

When it comes to live music, where there is a will, there is a way. Public, member-supported 88.5-FM — Southern California’s leading Triple-A (adult album alternative) rock station — is hosting Dawes at its first drive-in concert in Orange County on Saturday, Oct. 17.

The acclaimed Los Angeles-based acclaimed folk rock group will perform songs from its new album, “Good Luck With Whatever,” as part of 88FIVE LIVE at Drive-In OC at City National Grove of Anaheim. The show is being produced in partnership with Nederlander Concerts.

88.5-FM General Manager Patrick Osburn noted that the station has been a regional music “tastemaker” for years.

“Since the COVID-19 pandemic hit, we’ve really missed producing our own shows,” Osburn said. “We are beyond excited to be partnering with Nederlander and getting back to bringing live music to our concert-starved audience.”

Program Director Marc “Mookie” Kaczor agreed, noting that response to the idea of the station presenting drive-in concerts has been positive.

“A great deal of innovation has come out of these difficult times,” he said. “We’ve been itching to get back to live music, and a drive-in show is the way to do it. 88.5-FM, Dawes and Nederlander are beyond excited to make this concert happen!”

Dawes — composed of brothers Taylor (guitars and vocals) and Griffin Goldsmith (drums), along with Wylie Gelber (bass) and Lee Pardini (keyboards) — released “Good Luck With Whatever” on Friday, Oct. 2. The album presents the band at its most unapologetic. It also marks Dawes’ first release on their new label, Rounder Records.

From its first downbeat, the new album finds frontman Taylor Goldsmith grappling with the expectations of adulthood on a series of songs that reflect the band’s signature sound, graceful melodies with kinetic riffs and intricate musical interplay.

Tickets for Dawes’ drive-in concert go on sale to the general public on Oct. 2 via AXS.com. Tickets are $200-$350 per vehicle, and the number of passengers must not exceed the number of seatbelts in the vehicle.