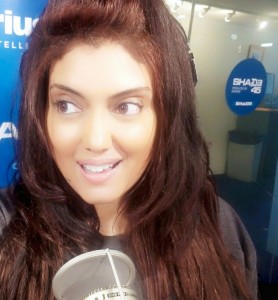 Hip-hop journalist, radio personality and show producer Skyy Hook will be offering an inside look at the music, culture and generational disconnect in the world of hip-hop as a visiting scholar next semester in at California State University, Northridge’s College of Social and Behavioral Sciences.

Hook is scheduled to teach “Anthropology 232: Expressive Culture,” which offers an intensive examination of a specific form of expressive culture. She will be tapping into her extensive knowledge of, and connections in, the world of hip-hop, as she helps students explore a culture that is not solely defined by music.

“Anthropology is the study of human beings and the human experience,” said Yan Searcy, dean of the College of Social and Behavioral Sciences. “Hip-hop is the most listened to type of music on the planet, and it influences all aspects of life. Skyy will give our students a critical understanding of hip-hop, and how it has influenced global culture. It may have started out as urban street music, but hip-hop has since grown into a culture that touches fashion, politics and has generated multimillion-dollar businesses.”

Searcy said Hook is just the first of what he hopes will be a series of visiting scholars who are part of the college’s proposed Center for the Interdisciplinary Pursuit of Hip-Hop Evolution & Research.

“The center, and Skyy’s class, are just one way to decrease the distance between the university and the community,” Searcy said.

Hook, who co-hosts “The World Famous Wake Up Show” on Shade 45/SiriusXM with King Tech, Sway and DJ Revolution, said she was honored to be asked to teach the class, and is looking to forward to sharing her extensive knowledge about hip-hop culture with CSUN’s students.

“There is a misunderstanding that hip-hop and rap music are the same thing. But they are not. Hip Hop is a culture whereas rap is a category of music. This must be discussed. There are elements of the Hip Hop culture that I’m absolutely delighted to share with the students. My goal is to bridge the generations of Hip Hop for them.

Hook noted that there is a disconnect between today’s generation of hip-hop enthusiasts and their parents.

“I am hoping to bridge that gap, and explain to the students why their parents may not like what they listen to now, and how all aspects of their lives that they take for granted have evolved and changed because of hip-hop,” she said.

In addition to her work on “The World Famous Wake Up Show,” Hook has a highly respected reputation for identifying and supporting emerging, underground and independent artists.

She said she plans to tap into her professional connections for her classes.

“I will be bringing in some special guests almost weekly to accomplish this. It’s going to be really fun. I specialize in Edutainment! So, I think CSUN is in for an informative good time!

“There is no better way for the students to learn than to give them the opportunity to talk to people who created the music, the fashion, and the culture that is part of hip-hop,” she said. “I also want them to learn about those in society who have helped shape the birth and evolution of this thing we love.”

Hook added that while she hopes her students enjoy her class, what is more important is that they learn something. Among the topics she intends to explore are music, fashion, poetry, the role of women, the duality of persona and the fact that hip-hop crosses all ethnic lines, both in its audiences and its artists.

“It truly is a global culture,” she said.