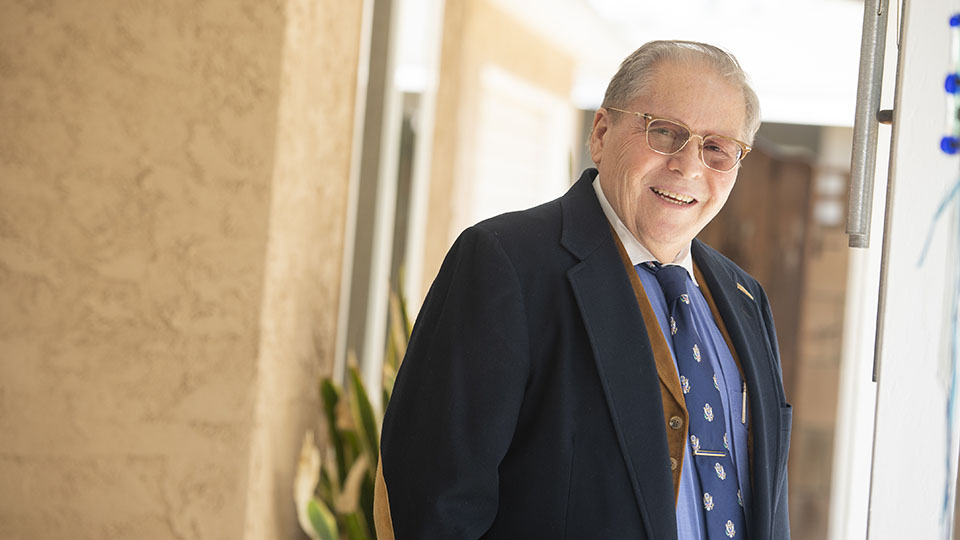 Alumnus Earl Adams ’69 (History), M.A. ’79 (History) made a $3 million planned gift to CSUN in spring 2020, to establish endowed scholarships in the Department of History and Department of Theatre, to benefit CSUN students in perpetuity. Photo by Lee Choo.

At the age of 18, Earl Adams was an idealist. A voracious reader and inspired by some of his high school teachers, Adams wanted to become a history teacher. In 1965, he enrolled at San Fernando Valley State College because it was affordable and close to his home in Topanga Canyon.

Adams ’69 (History), M.A. ’79 (History) completed his bachelor’s degree and began his graduate studies in history at what would later become CSUN, all while teaching fifth graders at Northridge Military Academy and student teaching seventh graders at Pacoima Junior High School — plus working 30 hours per week at the May Company department store to pay his way through school.

But like hundreds of thousands of young men of his generation, the Vietnam War blew a gaping hole in Adams’ plans and forever altered the course of his life.

After three years in the U.S. Army, Adams returned to Los Angeles in 1973 and faced verbal abuse and vitriol as a returning soldier from the drawn-out war. He buried his memories and war experiences and, like most veterans, never talked about it. He got on with his life. Something he never let go of, however, was his passion for history, music and literature.

This passion and desire to do some good inspired Adams to open the doors of history scholarship and musical theatre to more young people. This spring, he made a $3 million planned gift to CSUN, to establish endowed scholarships in the Department of History and Department of Theatre, to benefit CSUN students in perpetuity.

“Earl Adams’ planned gift to CSUN is one of the largest ever for our Department of History,” said CSUN President Dianne F. Harrison. “His investment in the future students of this department, where he earned two degrees, as well as to students in CSUN’s Department of Theatre, is an inspiration. His generous support of his alma mater will give Matador students more access to the study of history, musical theatre, opera and much more.”

Adams is a hard-nosed pragmatist in many ways. But he’s also a devoted student of ancient Egyptian history, a passionate reader of (and evangelist for) the works of Jane Austen and William Shakespeare, a lifelong classical music aficionado, and an active square dancer. (COVID-19 has paused his travel and involvement with local square-dancing organizations, but he carries on with dancing at home via Zoom meetings.)

“It’s very easy to be an idealist when you’re 18 years old,” Adams said. “However, what Vietnam taught me was that being an idealist wasn’t the real world. What my life experience has taught me is that you can do something good, but you can’t fix everything.”

“While many departments of history nationwide are falling on challenging times, we find history at CSUN thriving,” said Yan Searcy, dean of CSUN’s College of Social and Behavioral Sciences. “Earl’s gift and vision ensures that the department will continue to thrive by supporting students who promise to embody a focus on engaged, public history. I have been honored to get to know him as a thinker and a doer. We are inspired that his experiences at CSUN have touched him in ways that he will share the experience with others.”

“Mr. Adams’ incredibly generous gift and his passion for musical theatre and opera will allow us to create student production experiences that will enhance the students’ development into mature and powerful theatre and opera artists,” added Dan Hosken, dean of the Mike Curb College of Arts, Media, and Communication. “We are very grateful for this transformative gift.”

Adams grew up in Culver City — with movie studios like MGM (now Sony Pictures Studios) just down the street — and attended Venice High School. As a teen, he worked at the local library, where he got hooked on Will and Ariel Durant’s behemoth series on Western history, “The Story of Civilization.” Adams read six of the nine volumes in rapid succession (the Durants ultimately published 11 volumes). After his family moved to Topanga Canyon, he attended and graduated from Taft High School.

Soon, as an undergraduate at Valley State, Adams took music appreciation and many other courses from professor Larry Jarvis, who fostered his lifelong love of opera, classical and other music, he said.

“I sang in the choir and the glee clubs on campus. I’ve been listening to classical music since I was a kid,” Adams noted. This affinity continues to this day, and Adams keeps a consistent playlist of symphonies and other works playing in his Valley home, on radio and disc.

In 1969, in the midst of other Selective Service reforms, President Richard Nixon abolished all job-related deferments — which meant that Adams, by then a graduate student, would be drafted to serve in the highly unpopular and (now considered) lost-cause war, in which more than 58,000 American soldiers and millions of Vietnamese died by war’s end.

“When I was drafted, I decided to enlist,” Adams said. “If you were drafted, you [served] for two years, and if you enlisted it was for three — but, you got to pick which division of the military you went into. I didn’t see myself as a foot soldier – killing people up close, it just wasn’t for me. There were never any guarantees with the military, though.”

Adams did his basic training at Fort Ord, near Monterey (now the site of Cal State Monterey Bay). Then, the Army sent him to military intelligence school in Baltimore — and then he shipped out to Vietnam. Assigned as a “night G-2” (military intelligence) soldier, Adams was stationed at Pleiku Air Base, in the central highlands of Vietnam near the tri-border area with Cambodia and Laos.

Adams was responsible for writing intelligence summaries (produced on a mimeograph machine) for the central highlands area. His next post: The Army sent Adams to work for the Air Force as an intelligence analyst with “close air support” in the early 1970s.

“We got rocketed fairly regularly,” at Pleiku, he said. “They blew up my office. I was in my bunk sleeping at the time, because I was still night G-2 at that point. [That bombing] killed my first sergeant and wounded everybody else.”

Months later, Adams moved to “targeting” work with B-52 bombers, which were used in those days to “carpet bomb” wide swaths of the Vietnam and Cambodia countryside, he said. He served out the remainder of his military service and made it home in 1973.

“What my experience in Vietnam taught me was, if you’re going to survive, you’re going to have to deal with this system and how it really works,” Adams said. “And the more you understand about how things work, the better off you are, as far as your sanity is concerned. A great many people went nuts in Vietnam. They collapsed around me. When I was working in the TOCC (tactical operations command center, a concrete bunker in Pleiku) for example, I was in the only rocket-proof place. So, people would show up and sleep, sitting up, right next to me, because they thought they were safe in there. Even though they weren’t — they felt safe.

“I got a good, strong dose of reality [of what is happening], as opposed to what we say is happening,” he said. “I learned something from it, but it destroyed a lot of people.”

After Vietnam, Adams eventually completed his master’s degree at CSUN, but he’d changed — and so had the Valley. Northridge Military Academy folded — the site is now the preschool and elementary school campus for Armenian parochial school Holy Martyrs Cabayan Elementary.

“When I first came back from Vietnam, I didn’t discuss it at all,” Adams said. “Now, I talk about it all the time. But back then, you got such hostile responses. To me, what’s the point if we don’t learn anything from our experiences [and war]?”

Facing a local hiring freeze for teachers, Adams pivoted and was determined to forge a career and land a steady job that could support him for decades. At age 26, he landed a job with Gulf & Western, which led him to 30 years working in credit in the entertainment and computer industries.

Also an investor in real estate, Adams’ primary job now is “being retired, and it suits me just fine!” he said. For 30 years, he’s been active in square-dancing organizations, and he’s looking forward to being able to dance in person with those friends again — a few months down the road.

At CSUN, he’s also looking forward to spending time with students and faculty in the history and theatre departments — and supporting their endeavors in scholarship and the arts.

“Earl has been a generous supporter and active volunteer at CSUN for decades,” said Robert Gunsalus, vice president for University Relations and Advancement and president of the CSUN Foundation. “His generous planned gift to support our students and the History Department flows out of his enduring passion for the university and his kind heart. It will be an honor for the Foundation to help carry on his legacy of positive impact for generations to come.”