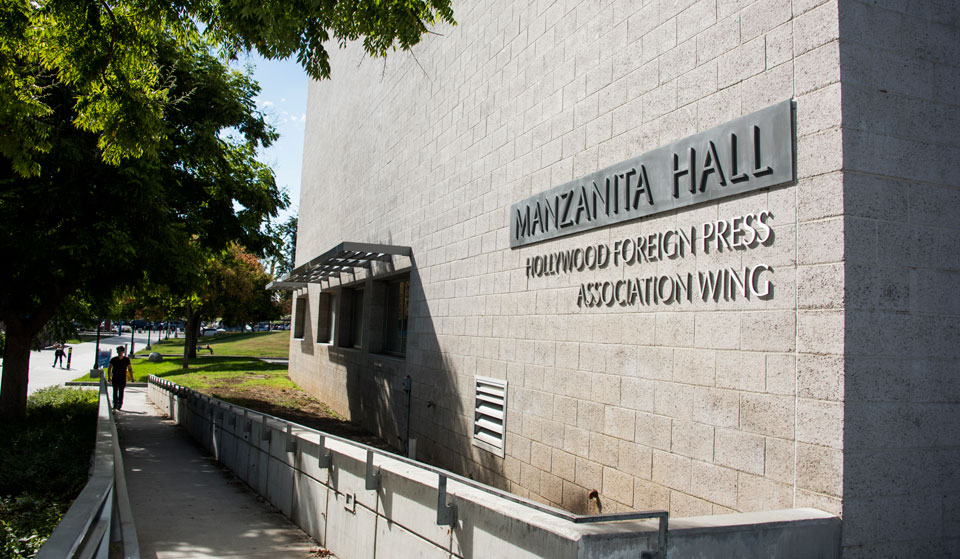 The Hollywood Foreign Press Association has awarded CSUN a total of $80,000 to support the university’s film students, with $20,000 specifically designated to help students adversely impacted by the COVID-19 pandemic. Photo by Lee Choo.

While the announcement did not take place in a star-studded ballroom of a Beverly Hills hotel, the Hollywood Foreign Press Association (HFPA) has awarded California State University, Northridge a total $80,000 to support the university’s film students, with $20,000 specifically designated to help students adversely impacted by the COVID-19 pandemic.

The announcement was made during a virtual star-studded celebration on Oct. 13. Actress Anna Kendrick announced grants awarded to CSUN.

“The Hollywood Foreign Press Association never ceases to amaze,” said Nate Thomas, head of the film option in CSUN’s Department of Cinema and Television Arts. “In addition to continuing to support the senior film project students with $60,000, they have supplemented that with $20,000 to support any CTVA student with COVID-19-related financial issues. This complements previous COVID-19 help of $10,000 sent our way back in April. They not only care about the future professional well-being of our students, but their personal well-being as well.”

The HFPA, which is made up of international journalists who report on the entertainment industry and hosts the Golden Globe Awards each year, handed out a total of $5.1 million in grants at the Oct. 13 event to a variety of entertainment-related and charitable organizations. The donations were for a wide range of projects, including film preservation, higher education, training and mentoring, and the promotion of cultural exchange through film.

CSUN’s relationship with the HFPA dates back to 1996. The association’s gifts over the years have supported student film projects and helped keep CSUN’s film program current with the latest technology. Students edit in the Hollywood Foreign Press Association Senior Film Edit Suite on campus, and they work on sound design in a state-of-the-art sound mix facility made possible by a grant from the HFPA.

In 2015, the HFPA gave CSUN’s Department of Cinema and Television Arts $2 million to support students, including the creation of a Hollywood Foreign Press Association Scholars Program, and to continue to enhance technology.

The Department of Cinema and Television Arts, housed in CSUN’s Mike Curb College of Arts, Media, and Communication, has an international reputation for producing dedicated and talented entertainment industry professionals who recognize the value of hard work as they learn and continue to perfect their crafts. The department currently enrolls about 1,550 undergraduate students and an additional 30 students in its graduate screenwriting program. Its alumni work in all aspects of entertainment media, from writing, producing and directing to manning cameras and having the final say in what project is made. The entertainment trade magazines Variety and The Hollywood Reporter regularly list CSUN as one of the top film programs in the world.