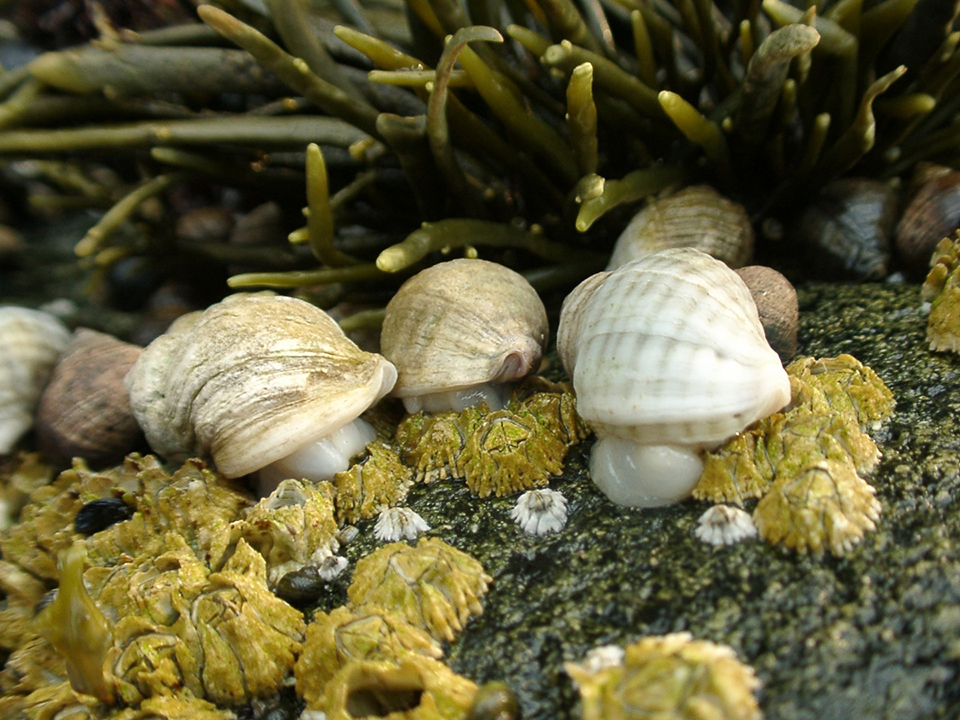 Dogwhelks feed on barnacles on the shores of Swan’s Island in Maine. A new study documents the decline of these and three other intertidal species — owing at least in part to climate change. Photo by Jonathan A. D. Fisher.

The waters of the Gulf of Maine are warming faster than oceans almost anywhere on Earth. And as the level of carbon dioxide rises in the atmosphere, it’s absorbed by the oceans, causing pH levels to fall. Ocean acidification makes it difficult for shellfish to thicken their shells — their primary defense against predators.

In a new study in the journal Communications Biology (which can be found at by clicking this link), California State University, Northridge biology professor Steve Dudgeon and Peter Petraitis, a retired professor of biology at the University of Pennsylvania, show that the changing climate is taking a toll on Maine’s sea life. A dataset collected over two decades, including numbers of five species of mussels, barnacles and snails, shows that all have been experiencing declines — some slow, some more rapid — in part owing to climate change.

“Coastal ecosystems in the northwest Atlantic Ocean have few species relative to similar habitats elsewhere,” Dudgeon said. “So, concurrent declines of five species, including both native and non-native, is proportionally large, and may cause profound changes in the ecology of coastal oceans in the region. The implications of this research are that continued declines of key species associated with changing climate in coming decades may simplify the food web by diminishing middle trophic levels between primary producers (algae) at the base and humans at the top.”

In 1997, Petraitis and Dudgeon, who completed a postdoctoral fellowship with Petraitis at the University of Pennsylvania in the 1990s, set up a long-term experiment on the Gulf of Maine’s Swan’s Island to study the ecological principles of multiple stable states. The concept encapsulates the idea that an ecosystem can switch quickly between entirely different compositions of organisms, given the right environmental perturbations.

For shellfish on Swan’s Island, one such perturbation occurs when periodic powerful winter storms cause sea ice to scrape off all the organisms attached to rocks on the shore, forcing the communities to rebuild from scratch the next year.
In 1996, the researchers simulated a single massive ice-scouring event by scraping the rocks to see what would happen as the shore recolonized. Since then, the researchers have been making an annual trip to their 60 study plots on Swan’s Island, counting the incidence of organisms living not only in the scraped areas, but also in areas left in their natural state, the control plots.
The current work took advantage of these control plot counts, looking at five common shellfish species: the tortoiseshell limpet (Testudinalia testudinalis), the common periwinkle (Littorina littorea), the dogwhelk (Nucella lapillus), the blue mussel (Mytilus edulis), and the barnacle (Semibalanus balanoides).

“We didn’t expect to see much change in the control plots,” Petraitis said, “but we were surprised to see these populations declining.”

Using an abundance of data from 1997 to 2018, the researchers found that very young mussels were in the sharpest freefall, declining almost 16 percent a year, while the other four species were dwindling by 3 to 5 percent each year. Over that time period, limpets, periwinkles and dogwhelks declined in total number by 50 percent, contractions the researchers describe as “sobering.”

To get at the question of why, the researchers looked to data on ocean temperature and chemistry. They found that the downward trajectory of mussels and common periwinkles matched up with increasing summer ocean temperatures collected from a nearby buoy.

Changes in barnacle numbers did not correspond with changes in ocean temperature, pH or aragonite saturation state, suggesting other factors are at play in their decline.

All five of these species play critical ecological roles in the Gulf of Maine.

As filter feeders, mussels and barnacles remove phytoplankton from the water column, “digesting them, pooping them out and fertilizing the shore,” Petraitis said. Limpets and periwinkles feed on algae and seaweed, so smaller numbers could lead to algal blooms and “greener” nearshore areas.

Since all five species serve as prey for a variety of animals, shrinking populations will reverberate up the food chain, affecting humans as well.

“Without animal consumption transferring organic matter up the food web,” Dudgeon said, “production in coastal oceans will be increasingly shunted directly through pathways of decomposition by microbial organisms, rather than to support populations of species that humans fish and on which coastal economies depend.”