Throughout his life, Romeo Guzmán M.A. ’08 (History) aimed to write accurate histories about his community with a proper depiction of his people and their history.

For more than 100 years, the city of El Monte has celebrated its white pioneers as heroes, innovators, and saviors — seen, for example, in the official city logo featuring a covered wagon.

However, this version of history isn’t the community’s full story. Over time, this version omitted the stories of countless non-white residents who played a critical role in forming the San Gabriel Valley community of El Monte as it exists today. Throughout the history of El Monte, there were many Mexican and Asian individuals who helped pave the way for the current community. As a historian, Guzmán said, he felt compelled to give voice to marginalized voices and educate the community about this full history. With Carribean Fragoza, he started this work in 2012 when co-founded the South El Monte Arts Posse (SEMAP), a group of writers, scholars, urban planners, and educators. Guzman currently serves as co-director of SEMAP.

In the same year, SEMAP launched a multi-year public history project and book, “East of East: Mapping Community Narratives in South El Monte and El Monte.” Throughout this project, Guzmán and his team have found ways to connect with the heart of the community. They have conducted interviews, put their book in local schools, and created a mural in South El Monte in order to help the community uncover and celebrate its full, true history.

The stories they’ve highlighted include older generations who grew up in El Monte and experienced the challenges of schooling, racism, discrimination, and life itself back in the day. Up until the middle of the twentieth century, El Monte and South El Monte were segregated areas with a separate school system for White and Mexican/Asian students. A lot of individuals overcame these struggles and were able to provide great lives for their children and families and go on to successful careers as time went on. However, their strength in doing so should be documented and SEMAP is doing just that. They have made it a point to highlight different communities such as Tongva, longtime Latino residents, recent immigrants, Japanese Americans, and other locals in order to uncover as much history as possible from every perspective. 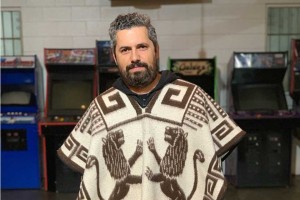 Romeo Guzmán has made it his mission to spark change in the community he loves.

The group also plans to explore the lost history of El Monte and South El Monte through four thematic bike rides, Guzmán said. The first bike ride is scheduled for November and will focus on popular culture and art.

“One of our goals is to really place the accurate history as a priority of education within the community,” Guzmán said. “We include the community in the way we operate. Murals, bike tours, articles, etcetera, and we want what’s best for them. The relationships extend beyond the projects in many ways. We actually learn and care about the people we write about.”

As he started his quest for a more complete history of El Monte, information was scarce. If he really wanted to get this done, Guzmán said, he had to turn to the community itself for answers. They had to conduct interviews, investigate family histories, and collect a lot of research that they could only receive from those who know the secrets of the community.

This year, his work paid off in a big way. Guzmán was awarded the Whiting Public Engagement Fellowship provided by Whiting. This meant a grant of $50,000. The grant is invitation only and celebrates humanities faculty who embrace public engagement in their scholarly career. He is currently an assistant professor at Claremont Graduate University, which led to this achievement. This gave Guzmán and his team the resources to help spread the word about their book and project throughout schools and streets in the community.

Guzman credited his CSUN education with helping him form and build more passion for his goals.

“After getting my MA at CSUN, I got into all the schools I applied to for grad school. I owe the CSUN faculty and staff for everything the school does for students of color and first-generation students,” Guzmán said. “I didn’t have good writing skills or study habits in high school and yet, I was able to learn these skills at CSUN and] accomplish these things. CSUN played a huge role.”

Guzmán has helped elevate and celebrate the stories of people of color in El Monte and has more projects in store.

“We want official history to be accurate. A new generation will come out knowing the real history of El Monte,” Guzmán said. “I’m hopeful what they can do with that knowledge and what futures they might build.”

Guzmán’s next projects include a forthcoming book, “Orphans of the Nation: Mexican-Americans, Transnational Citizenship, and Belonging, the 1920s to 1940s.” The book follows the first mixed-status Mexican families of the 20th century across the U.S.-Mexico border, to understand how migrant children negotiated and practiced U.S. and Mexican citizenship.