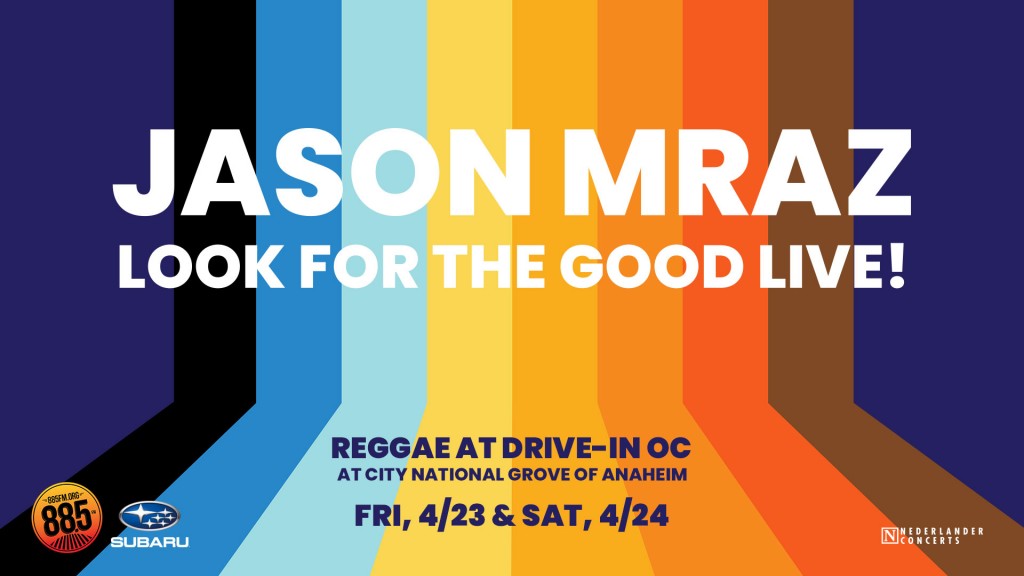 The shows are part of 88FIVE Live at Drive-In OC at City National Grove of Anaheim, and are being produced as a partnership between Nederlander Concerts and 88.5-FM, Southern California’s leading Triple-A (adult album alternative) rock station.

“I am very proud of the independent 88.5-FM team as they have been very Innovative during the past year, shifting their efforts to both virtual and live content creations,” he said. “Presenting a live, drive-in show with an artist of Jason Mraz’ level is just what our audiences have been craving!”

Mraz burst onto the music scene in 2002 with the release of his debut studio album, “Waiting for My Rocket to Come,” which contained the single, “The Remedy (I Won’t Worry),” which reached No. 4 on the U.S. Billboard chart. His second album, “Mr. A-Z,” released in 2005, peaked at No. 5 on the Billboard 200 and sold more than 100,000 copies in the United States. Subsequent albums — including “We Sing. We Dance. We Steal Things.,” which included the international hit “I’m Yours;” “Love is a Four Letter Word;” “Yes!” and “Know.” — also have skyrocketed to the top of the charts. His most recent album, “Look for the Good,” was released last summer.

Mraz has won two Grammys, two Teen Choice Awards, a People’s Choice Award and the Hal David Songwriters Hall of Fame Award. He has earned platinum and multi-platinum records in more than 20 countries.

Mraz recently collaborated with musicians Keith Goodwin of Good Old War, Zac Brown and KT Tunstall on a new single, “I Know What Love is (Because of You),” to support the MusiCares COVID-19 FUND, to help those in the music community adversely affected by the pandemic.

Gates open at 5:30 p.m. and the music being at 7:30 p.m. for each show. Tickets for the drive-in concerts go on sale at 10 a.m. on Friday, March 19, at ticketmaster.com. Pre-sale starts today. Tickets for the concerts start at $250. One ticket covers on vehicle and a maximum of five people in the vehicle. No bicycles, motorcycles, buses, RVs, trailers, limousines or foot traffic will be allowed.