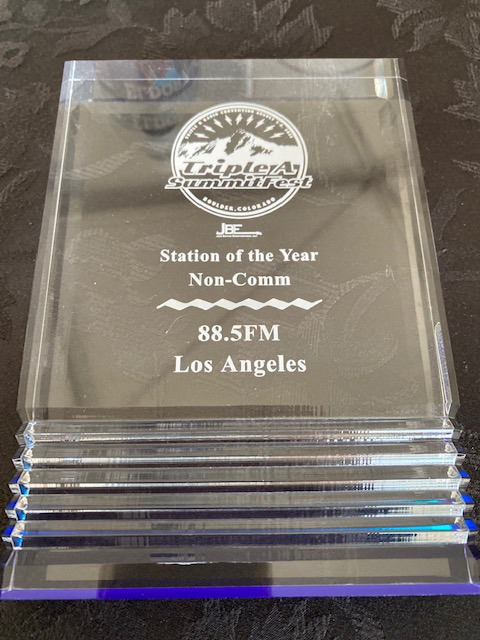 The new name recognizes the “sound” the station is known for, and marks the fifth anniversary of the partnership between KCSN, housed at California State University, Northridge, and KSBR, whose home is at Saddleback College in Mission Viejo. The stations simulcast the Triple-A format on the same frequency of 88.5-FM. 88.5-FM was named “non-com music station of the year” by JBE Triple-A Summitfest earlier this month.

“The station’s programming is receiving critical acclaim, including being nominated the ‘best public music station’ in the country two years in a row by JBE Triple-A Summitfest, one of the leading arbitrators of the format in the U.S.,” said 88.5 General Manager Patrick Osburn. “Winning the award this year is a huge honor. We thought it was time to reinforce our large geographic reach and appeal in both Los Angeles and Orange Counties, hence our new brand, ‘The SoCal Sound.’”

“We’re excited about ‘The SoCal Sound,’” said program director Marc Kaczor. “The new branding represents our steadfast commitment to music fans and to the artist community. You will continue to hear new music, deep tracks and local music every day of the week. The SoCal Sound will bring you superb video content, exclusive artist interviews, podcasts and unique, members-only events all over Southern California. It’s a new era in public radio.”

As pandemic social-distancing and mask restrictions have eased, live music has been abundant this summer, and 88.5-FM, “The SoCal Sound” is embracing the many things that Los Angeles and Orange Counties have in common, including great music, concerts, sunshine and lifestyle.

“We’re beyond fortunate to have a wealth of creative talent in our listening area, and an audience hungry for discovery,” said legendary broadcaster, music tastemaker and longtime morning-drive icon Nic Harcourt. “When I open the microphone, I’m speaking to people from Hollywood to Mission Viejo, and everywhere in between. That audience appreciates a dynamic mix of great legacy artists and newcomers, who create the new mainstream. After all, Los Angeles and Southern California drives entertainment trends both nationally and internationally.

“The station has a large terrestrial footprint,” Harcourt said. “As artists route their tours through Southern California, you’ll often find them playing venues in both Orange County and LA.  I seriously believe that a part of our job, beyond playing the always-evolving best music mix in town and supporting great music and the artists who make it, is to provide a radio home for the community we serve.”

88.5-FM listeners will be greeted with the new SoCal Sound name and logo the morning of Wednesday, Aug. 10. Station officials hope it will continue its journey as a regional home for music lovers and fans.

88.5-FM, The SoCal Sound, is a combined effort of California State University, Northridge (CSUN) and Saddleback College, which began simulcasting as 88.5-FM in October 2017, linking the Los Angeles County- and Orange County-based signals. The station’s Triple-A programming is available on the KCSN and KSBR 88.5 HD1 channels, via the 88.5 app and online at www.TheSoCalSound.org.