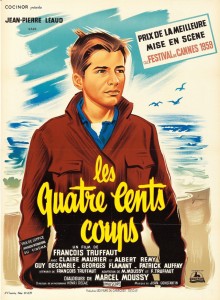 Poster, in French, from “The 400 Blows” from the Singleton collection.

CSUN’s Department of Cinema and Television Arts will present a new exhibit of poster art in February, “John Singleton and the Auteurs Who Inspired Him,” from the private collection and work of the late acclaimed filmmaker John Singleton.

The new collection on loan from Singleton’s estate will be installed in the Gallery of Film Poster Art in Manzanita Hall. The collection includes six vintage foreign language posters that Singleton collected during his lifetime, as well as six corresponding posters from his own films.

These include Singleton’s films “Boyz N the Hood,” “Poetic Justice,” “Rosewood,” “Baby Boy” and others, as well as foreign language posters for renowned films “The Good, the Bad and the Ugly” by Sergio Leone, “The 400 Blows” by François Truffaut and “Citizen Kane” by Orson Welles.

“Each poster in the collection had a particular meaning for Singleton when he was making certain films,” said Dianah E. Wynter, a directing and media theory professor in the Department of Cinema and Television Arts.

“The bleak realism of ‘The 400 Blows’ influenced his approach to ‘Boys N the Hood’ and ‘Baby Boy’,” Wynter continued. “The Bushido code of honor, epitomized in Toshiro Mifune’s samurai characters, is where he found the moral gravitas of his action films.”

Singleton had a deep affinity for Orson Welles, his favorite filmmaker. At the age of 25, Welles became the youngest person ever nominated for directing at the 1942 Academy Awards. Fifty years later, Singleton surpassed Welles in the same category with “Boyz N the Hood” at age 23. Singleton still holds this distinction, as well as being the first African American ever nominated for the directing award. He passed away last year at age 51. Plaque outside of the Gallery.

CSUN’s Gallery of Film Poster Art is the only university gallery in the United States devoted exclusively to showcasing the art of movie posters — a largely unappreciated art form.

The opening gala for the exhibit will take place at 5 p.m. on Thursday, Feb. 20. Admission to the gallery is free. Gallery hours are 8 a.m. to 5 p.m., Monday through Friday. It is located in Manzanita Hall, adjacent to the Elaine and Alan Armer Screening Room.