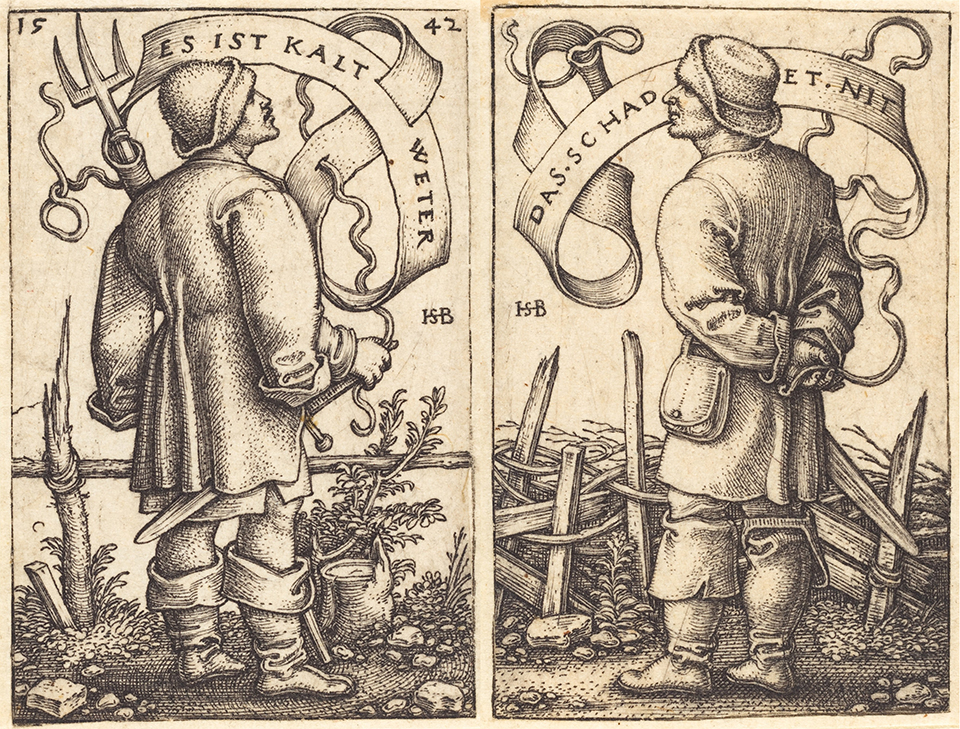 CSUN history professor Natale Zappia and a team of researchers find clues for coping with climate change in the past. Their findings appear in the most recent edition of the journal Nature. The above is a woodcut print, “The Weather Peasant,” by Sebald Beham from 1542 that states “it is cold weather” but “it does not harm.”

Clues for surviving the dramatic fallout from climate change can be found in the actions of people who lived centuries ago and managed to adapt, even thrive, despite significant climate shifts caused by two different ice ages.

This conclusion by an international team of researchers from such disciplines as archaeology, geography, history and paleoclimatology — including California State University, Northridge historian Natale Zappia — challenges the notion that dramatic climate changes inevitably plunged societies into crisis and even collapse. Their findings, “Towards a Rigorous Understanding of Societal Responses to Climate Change,” appear in the journal Nature.

“We use the theme ‘resiliency’ a lot in the article,” said Zappia, an associate professor in CSUN’s Department of History and director of the university’s Institute for Sustainability. “So much of the research on climate change focuses on the hard science impact of the warming planet, and its dramatic impact on societies in broad terms. We looked at it from a different angle. We looked at the full scope of how people responded and adapted to what was happening around them because of a changing climate, in this case during two different ice ages.

“Yes, we are in the middle of a crisis when it comes to climate change,” he continued. “We are headed toward a precipice. If we are going to survive, we are going to have to learn how to be more flexible as a culture. Looking at history, what societies have done in the past, can give us a roadmap for how we can move forward, adapt and maybe thrive.”

Zappia said the researchers came together to find a “better way” of studying what they called the “history of climate and society (HCS),” a term they coined for the transdisciplinary study of past impacts of climate change on humanity. Traditionally, what they called HCS involved researchers in a variety of disciplines that study climate change — including archaeology, genetics, geography, history, linguistics and paleoclimatology — work within their own fields and rarely in interdisciplinary teams.

Zappia and his colleagues wanted to develop a method by which HCS scholars could work together to find more sophisticated connections between climate and society. They used that method to develop case studies of societies that adapted to two of the most-studied periods of natural climate change: “Late Antique Little Ice Age” of 6th and 7th century and the “Little Ice Age” of the 13th to 19th centuries.

Working together, the researchers found that diverse societies and communities were “resilient in the face of climate change,” meaning that they responded in ways that maintained their essential structure, function and identity.

“Some even adapted to exploit new opportunities created by shifting environmental circumstances,” Zappia said. “We uncovered several common characteristics of societies that coped well with climate change, including strong trade networks, the ability to be mobile and the capacity to learn from past mistakes.”

Zappia said the researchers who focus on the history of climate and society often used to predict disastrous consequences of future climate change. — “the doom and gloom facing humanity.”

“Our research showed that pre-modern societies could effectively respond to the climate created by the two ice ages, suggesting that, with sufficient political will, effective adaptation will be possible for us, too,” Zappia said. “It also provides a roadmap for HCS scholars to develop more rigorous and, ultimately, more convincing studies of the impact of climate change on past societies — studies that could help us better anticipate the challenges of our hotter future.”