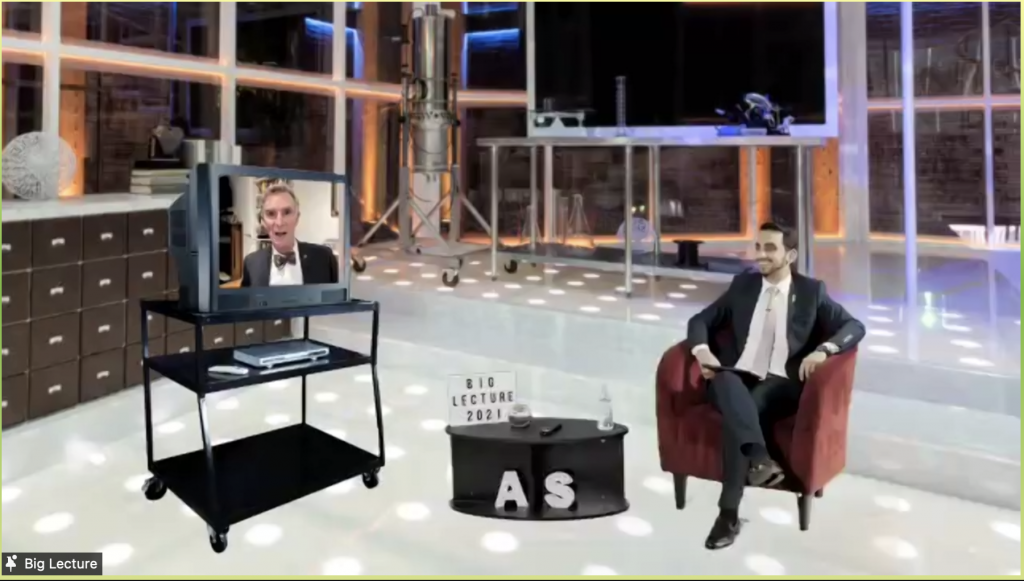 Bill Nye, best known as the host of “Bill Nye the Science Guy,” joined Matadors for this year’s AS Big Lecture, moderated by AS President Jonathan Hay.

One of the most famous and recognizable theme songs of the ’90s played as a live chat scrolled fast and furious, with students typing “Bill! Bill! Bill!” along with the song.

On Nov. 9, Bill Nye joined hundreds of Matadors online for this year’s CSUN Associated Students (AS) Big Lecture, moderated by AS President Jonathan Hay. Nye, a mechanical engineer by trade, is best known as the host of the hit television show “Bill Nye the Science Guy.” The program, which aired from 1993-98, is still played in classrooms across the country, instilling a love of science in generations of students.

Sporting one of his iconic bow ties, Nye touched on numerous topics, from his past success to current projects. He also took questions in the chat from students. 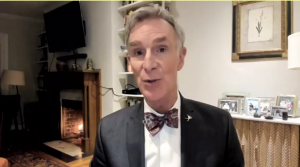 Over six seasons, “Bill Nye the Science Guy” won 19 Emmy Awards, and Nye personally won seven Emmys for writing, performing and producing. Nye shared that he never fully adjusted to the fame his show brought him, but let passion drive his work.

“What you see is what you get — I’m kinda the same guy,” Nye said. “When you’re in love, you want to tell the world — and I love science.”

He asked the CSUN students, “What is it about your favorite teacher or your favorite professor that you liked or that you remember? My claim is that it generally wasn’t the subject matter … it was their passion. They love what they do. When I was doing the Science Guy show, I was letting my passion come through the cameras the best I could. So, I consider myself an entertainer and an educator and an engineer. I love it all!”

Nye has also done several other shows, including Netflix’s “Bill Nye Saves the World,” a talk show in which he brings in celebrity guests and experts to speak about scientific issues. His critically acclaimed Netflix documentary, “Bill Nye: Science Guy,” follows him as he tackles climate change skeptics and shows why scientific evidence is so important. Along with being an entertainer and educator, he is a comedian, author, inventor and chief executive officer of the world’s largest independent space interest group, The Planetary Society.

Nye recently finished filming a new show, “The End is Nye.” The series, which will stream on NBC and Peacock sometime in 2022, will use science to teach audiences about large-scale global disasters — natural, such as asteroids and volcanoes, and human-made, such as authoritarianism and chemical warfare.

“I’m excited about the show,” he said. “There are six episodes so far, and there are six disasters, and we talk about what we would do about them.”

Beyond the screen, Nye is a well-known climate change activist who testified before Congress in June about the dangers of climate change. Nye noted that another scientist, James Hansen, gave similar testimony to Congress in 1988 about the harmful effects of carbon monoxide on the planet.

“And we haven’t done anything! Since 1988, nobody has hardly done anything about it,” Nye said. “I sympathize with you guys, with young people going, ‘What are you grown-ups doing? What’s going on?’”

When asked by Hay what he believed to be the biggest fallacy regarding climate change, Nye said: “The biggest fallacy … is people who say it’s not happening. Conservative news media seems to make a living, screaming and waving their arms about how climate change is nothing to worry about. That’s not accurate — it’s a very dangerous perspective.”

He also expressed hope and a call to action.

“I am very hopeful about the future because of you,” Nye said, pointing directly at the camera. “Because young people are going to be running the show pretty soon. Because you guys aren’t going to put up with this stuff … you all will come of age without this myth that humans are not causing climate change. So let’s get er’ done, people! Let’s get er’ done.”

Nye also shared some tangible advice with students that he wished he followed when he was a student at Cornell University.

“I pulled an all-nighter once before a final exam, and I blew it,” he said. “I sucked. It was a huge mistake. I know we all try it, but I recommend against it.”

He added, “I took these advanced college courses that were complicated. Looking back, I wish I had just focused on the stuff I was really passionate about.”

In one of his questions, Hay asked Nye to name his favorite thing about this generation of scientists and academics.

“My favorite thing is that you all are fearless,” said Nye, speaking directly to the camera. “You can do more than you think.”

As the lecture wrapped up, messages of praise and admiration for Nye continued to flood the live chat. Many students said they were inspired by the scientist’s message and career.