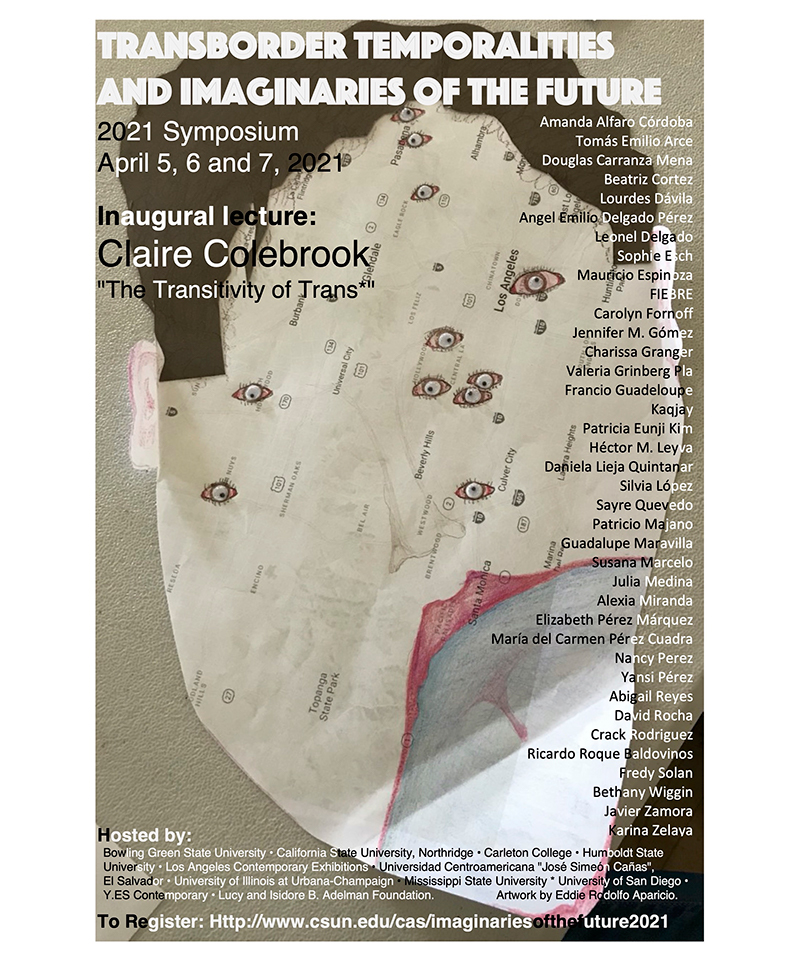 Transborder Temporalities and Imaginaries of the Future. Image courtesy of Beatriz Cortez

California State University, Northridge’s Department of Central American and Transborder Studies will host “Transborder Temporalities and Imaginaries of the Future,” a three-day virtual interdisciplinary symposium exploring movement across Borders and Temporalities in the Central American experience and imaginaries of the future from a cross-cultural lens. The symposium, held April 5 to 7, will offer simultaneous English/Spanish interpretation.

“This symposium seeks to make visible the Central American experience and the ways in which movement across time, space, identities, disciplines and cultural forms of production has generated forms of resistance and survival, has created untimely collectivities across borders, which enable the construction of the future,” said Beatriz Cortez, a professor in the Department of Central American and Transborder Studies who co-organized the event.

The event will open with a keynote address delivered by the renowned speculative philosopher and thinker Claire Colebrook, a professor at Pennsylvania State University. Colebrook’s keynote, “The Transitivity of Trans*,” will explore how the word “trans*” has been hijacked by various metaphysical schemas, so that trans* can signal a general transitivity, as well as how someone can navigate the ethics of traveling to learn about other cultures with the realities of colonization when for many people, the only way to their future is to migrate from their original homes.

The program includes readings and interviews with renowned Central American authors such as María del Carmen Pérez Cuadra and Javier Zamora, as well as screenings by award winning Central American filmmakers such as Nicaraguan María José Alvarez and Guatemala-based, Salvadoran filmmaker Guillermo Escalón. Scholars from Chile, the Caribbean, Central America, Mexico, and the United States will present their research.

The symposium is open to the public, but attendees must register to attend events. For more information on the symposium and links for registration, visit the Imaginaries of the Future webpage, available in both Spanish and English.