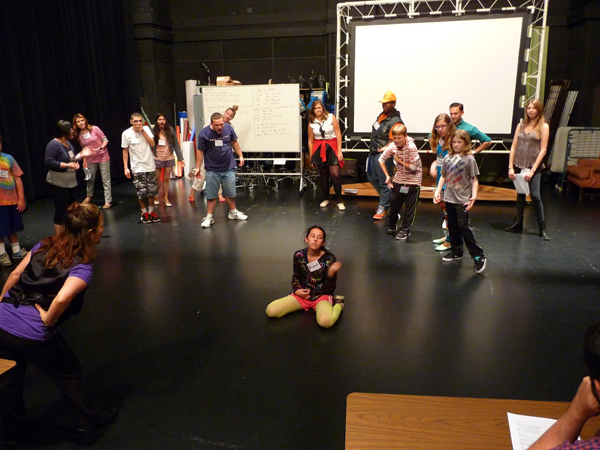 In the battle between fantasy and reality, a group of “gamers” are forced to leave the virtual world, deal head-on with bullying and discover the merits of real-world situations.

“Joining the Spectrum,” a new play presented in collaboration by California State University, Northridge’s acclaimed Teenage Drama Workshop (TADW) and the award-winning The Miracle Project, is performed by teenagers — many of whom are on the autism spectrum — at CSUN next month. The play explores how inclusion can change the lives of everyone, including those with a wide array of challenges and abilities.

“Theater is an art form that allows us to look and examine ourselves, our relationships and our community,” said CSUN theater professor Doug Kaback, executive director of Teenage Drama Workshop. “Providing young people with this important forum has been part of the TADW experience for 57 years. The community that we have assembled this summer — including many diverse departments on our campus, as well as community organizations — helps facilitate a unique and important experience that allows these teens to reflect on critical social questions and show us some answers we haven’t considered yet.”

Elaine Hall, a pioneer in the area of theater and autism, called the joint production “amazing.”

“The whole process — seeing a musical emerge in just a few days — is amazing,” said Hall, founder of The Miracle Project, a groundbreaking methodology that uses inclusive theater and expressive arts  to help individuals with autism express themselves.

“But what is more amazing is the way the kids — there are 33, with 23 on the spectrum — are working together,” she said. “They are becoming friends and peers. There is an overwhelming sense of camaraderie and collaboration beyond anything many of these teens, and even the adult volunteers, have ever experienced.”

Hall said the teens with autism covered the spectrum, from severely nonverbal to highly verbal. A $10,000 gift from ACT Today, a nonprofit organization that raises awareness and provides treatment and support for families with autism, provided scholarships for some of those students to take part in the project.

One of those young people told Hall that when he started the program, he was “scared and anxious.”

“He said today, not only does he have friends, but that he feels part of a family,” she said. “That is something sacred.”

While the teens are using drama to explore the power of acceptance and inclusion, a team of CSUN researchers has received a $25,000 grant from the National Endowment for the Arts, and support from CSUN’s Institute for Community Health and Wellbeing, to study how theater can improve the lives of children on the autism spectrum and how working creatively with peers with disabilities impacts more typical teens’ perceptions of those on the spectrum.

“We have known for thousands of years, at least anecdotally, that theater is empowering,” said CSUN theater professor Ah-Jeong Kim. “Nobody has really documented why. But anyone who has been on stage, behind the stage, worked with the theater community or has even been a member of the audience can verify the empowerment theater provides.

“I am hoping in the course of our research that the outcomes prove the effectiveness of drama in a meaningful way for children on the autism spectrum and the neurotypical kids who are working with them.”

CSUN sociology professor David Boyns, who is working with Kim on the research project, agreed.

“The research project is exploring new territory,” Boyns said. “This is the first time that I am aware of that there has been research conducted on a collaboration of this kind — between peers who are on the spectrum and those who are neurotypical.”

Boyns said he, Kim and the CSUN undergraduate and graduate students working with them on the research project are specifically looking at how the collaborative theatrical experience affects the socialization and communication skills of those with autism.

“One of the things that theater does is create a context on stage that engages its participants in role taking and role playing,” he said. “One of the areas that youth who are on the spectrum are often seen as having a weakness is empathy or seeing the perspectives of another person. Theater requires those kinds of skills.”

For the youth who are not on the spectrum, Boyns and Kim said they wanted to find out how the collaborative theatrical experience affects their perception of peers who have differing challenges and abilities.

“The experience involves the cultivation of relationships with youth on the spectrum,” Boyns said. “We are curious to see how that affects the kids without autism, and their perception of autism and of persons with autism, as well as how it affects their compassion for themselves and compassion for others.”