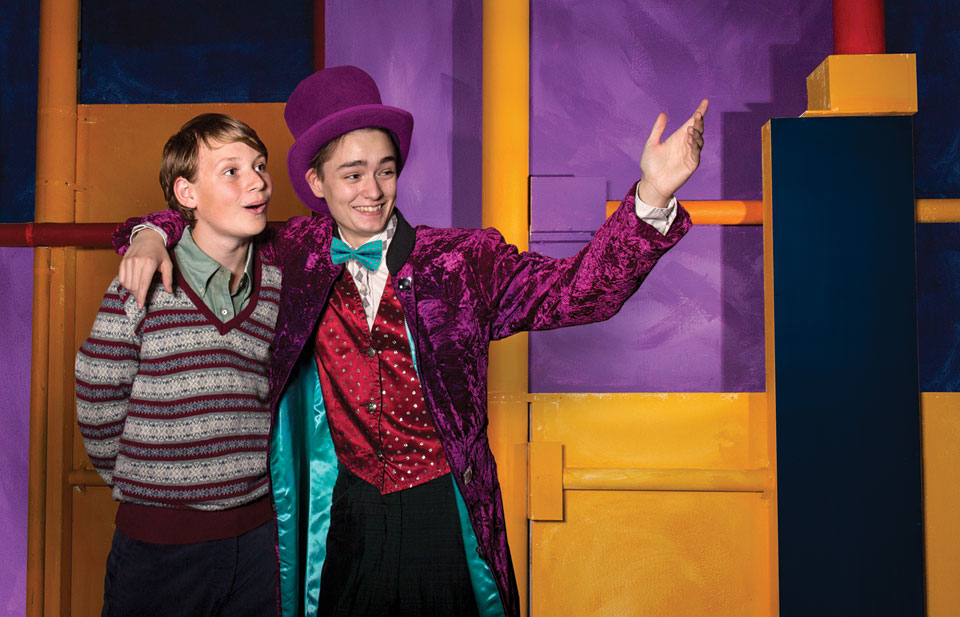 From right, Henry Parker-Elder, as Charlie Bucket, and Will Riddle, as Willy Wonka, rehearse a scene from TADW's "Charlie and the Chocolate Factory," Photo by Michael Smith, courtesy of Teenage Drama Workshop.

Looking for a “golden ticket” for an entertaining summer family treat? California State University, Northridge’s Teenage Drama Workshop (TADW) is offering a journey “under the sea” with Ariel, Flounder and Sebastian, or a special tour of Willy Wonka’s chocolate factory. The acclaimed summer youth theater program is presenting “Charlie and the Chocolate Factory,” adapted from Roald Dahl’s children’s classic, from July 10-25, and “Disney’s The Little Mermaid Jr.,” based on the Hans Christian Anderson story and Disney film, from July 15-24, at CSUN.

“Each summer for the last 58 years, the Teenage Drama Workshop has presented highly entertaining shows that, in many cases, introduce the art of live theater to young audiences,” said CSUN theater professor Doug Kaback, TADW’s executive director. “Our productions feature the creative work of professional directors and scenic, costume and lighting designers, but always keep the focus on our emerging teen artists as they shine on stage and behind the scenes.”

One of the nation’s oldest such programs, TADW immerses the teenagers — this year there are about 80 students in grades seven to 12 — in the day-to-day reality of a professional theatrical troupe, from designing lighting, costumes and sets to learning lines and choreography during an intense six weeks, which started June 15. The cast of ‘Disney’s the Little Mermaid Jr.’ in rehearsal. Photo by Melissa Filbeck.

“Charlie and the Chocolate Factory” audiences will meet “the most amazing, the most fantastic, the most extraordinary chocolate maker the world has ever seen!” A golden ticket awaits Charlie Bucket and others for a special factory tour by Willy Wonka and the Oompa-Loompas, as Dahl’s classic story is brought to life. The play is directed by Ronnie Sperling, with Chris Halsted.

Shipwrecks, a sea witch and silly sea gulls cannot stop true love in “Disney’s The Little Mermaid Jr.” Directed by Ray Saar, the musical invites audiences to journey “under the sea” with Ariel, Flounder and Sebastian the Crab.

There will be 10 performances of each show, with one performance each set aside as “sensory friendly” to make the theater experience accessible to children and adults on the autism spectrum or people with special needs. The sensory-friendly performances are scheduled to take place at 2 p.m. on July 11 for “Charlie and the Chocolate Factory” and at 11 a.m. on July 18 for “Disney’s The Little Mermaid Jr.” The cast of ‘Charlie and Chocolate Factory’ rehearsing. Photo courtesy of Melissa Filbeck.

To make those shows sensory friendly, subtle adjustments will be made, including just a slight dimming of the lights and a reduction of jarring sounds or strobe lights focused on the audience. There will be a pre-performance introduction of the characters and synopsis of what will be happening on stage. In the lobby, there will be quiet areas and an activity area for those who need a break during the performance.

“There are families who have never before felt they could take their children to a live theater performance,” Kaback said. “We want them to feel welcome here at CSUN. We have made as many accommodations as we can to ensure that these performances are not overwhelming, and to take into account their children’s needs.

“This is our third year offering sensory-friendly performances, and each year the response has been overwhelmingly positive from the community.”

In addition to the two plays, TADW also will present its annual “10-Minute Play Festival,” where student playwrights explore the dreams and challenges of their lives in original, short plays. Students in TADW’s playwriting and improvisation electives collaborate to bring an idea from “age to stage” in six weeks.

For more information about TADW or any of the performances, call (818) 677-5811, email tadw@csun.edu or visit the website www.csun.edu/tadw.