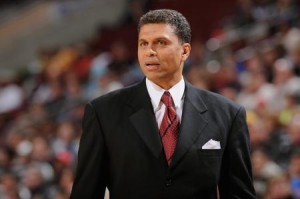 The 2013-14 academic year began this week at California State University, Northridge, New and returning students are coming back to the campus for the next chapter in their education. CSUN’s men’s basketball team is also starting a new chapter this fall with a new head coach, former NBA star Reggie Theus. ESPN college basketball writer Andy Katz throws the spotlight on the new Matador coach in his series on “new faces in new places.”

Katz focuses on Theus’ determination to get back to being a college basketball head coach, a position he had previously held at New Mexico State University. His road back to the top spot included stops assisting at other colleges, including working for Rick Pitino during Louisville’s 2005 title run and coaching in the NBA’s developmental league. It’s that type of history that CSUN Director of Intercollegiate Athletics Brandon E. Martin, Ed.D. was looking for in a coach to start the program anew.

“We are excited to have him as the leader of our flagship program,” Martin told Katz. “His pedigree as an NBA player and coach, as well his ability to elevate a college program, made him stand out from a competitive pool of candidates. This is a game-changing hire for the CSUN basketball program. It speaks to our commitment to advancing our program to a national stage.”

For more: Reggie Theus returns to the college ranks (ESPN)