The story of 2020 for many in this country might be told with five words: shock, confusion, change, appreciation, hope.

Five days in the life of the man who flips the switch that electrifies Los Angeles’ center of entertainment represent each of these words. And they tell the story of his year.

CSUN alumnus Lee Zeidman ’78 (Experimental Psychology) ’80 (Recreation and Tourism Management), president of STAPLES Center, Microsoft Theater and L.A. LIVE, has dealt professionally with the uncertainty and hardship of the shutdown.

Mass gatherings have been impossible since March, thus sending L.A. sports teams out of state for a time, canceling concerts and debilitating restaurants.

Even before the pandemic changed the world in March, a tragedy in January on what was supposed to be one of the most celebratory days at STAPLES Center dimmed the lights.

But Zeidman, as an unprecedented year reaches its end, is playing a key role in bringing normalcy back to the city of Los Angeles.

The texts started rolling through Zeidman’s phone like a drum beat.

“Is this true? Could this possibly be true?” he was asked.

It was. On the morning of the Grammy Awards, scheduled that night at the STAPLES Center, the beat stopped in Los Angeles.

Lakers legend Kobe Bryant, his daughter Gianna and seven others died in a helicopter accident. 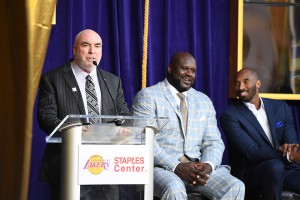 Zeidman had known the basketball superstar for nearly 25 years, first meeting him when the Lakers played at the Forum, where the CSUN graduate worked as the iconic venue’s vice president of operations.

Their relationship had grown over the years. When the STAPLES Center unveiled a banner in 2015 for Taylor Swift’s record-setting 16th sold-out show at the arena, Zeidman called on Bryant to surprise the pop star during a concert for the reveal.

Because Bryant created so many memories at the arena as a Laker for 20 seasons and transcended the sport, the Grammys wanted to pay tribute.

Zeidman and his team kept Bryant’s retired jersey numbers lit through the ceremony, they worked to provide performers with Bryant jerseys so they could pay tribute, and Zeidman decided to make it logistically possible during what is typically a closed-off event for people to come to L.A. LIVE and memorialize the Lakers legend. 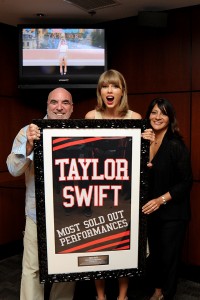 “We were getting reports that people were coming down and starting to congregate downtown in and around STAPLES Center and L.A. LIVE. (It was) pretty much blocked off (from) access to the exterior of the arena for the Grammys egress, but I told our staff to let it grow. Let it go organically. We’ll see what happens,” Zeidman said.

Zeidman and his team ensured that fans, during what was one of the most high-security events of the year at the location, were given the opportunity to mourn. Over the next week, a memorial grew.

By the time the decision was made to transition the area back to normal, there were 1,353 basketballs on the complex, 25,000 candles and 5,000 signs and letters.

Items were packed up, cataloged and some were given to Bryant’s wife Vanessa. Flowers were turned into mulch and spread through the complex. The next undertaking was the Celebration of Life for Kobe and Gianna Bryant on Feb. 24 at STAPLES Center.

It was another logistical challenge, but through synergistic collaboration between the Lakers, Clippers, the Bryant family, NBA and Zeidman’s team, the event took place on the morning of Feb. 24. Then the arena was quickly transitioned for a Clippers game that evening.

“I’m so proud of our team who put together the memorial and flipped the building to a Clippers-Memphis Grizzlies (basketball) game that night,” Zeidman said. “I remember standing in the corner where I do, thinking that at noon we were just wrapping up the memorial where the world is watching. And then you know six hours later I’m ready for the Clipper game.”

Fans filed out of the STAPLES Center as workers transitioned to normal cleanup after a hockey game.

Then, about 2,000 workers made their way across the street to the Microsoft Theater.

“Listen, we don’t know a lot right now,” Zeidman recalled saying. “I can’t tell you if this is going to last three weeks, six weeks, two months, six months, but I will tell you we will keep you informed and we will do everything possible to keep you working.”

It was the final event in front of fans at STAPLES Center in 2020.

That day, the NBA suspended its season. The National Hockey League followed suit the next day after. At the time, two of the country’s leading concert promoters, including AEG Presents (AEG is also the parent company of L.A. LIVE and STAPLES Center), suspended all events through the end of March.

“Tremendous,” is the word Zeidman used to describe the COVID-19 pandemic’s impact on L.A. LIVE.

There are 17 restaurants in the complex. The venues host 600 events annually.

But the people, Zeidman mentions, the 4,000 workers, are paramount.

“Without the guest services and the security people, and the engineers and the operations team, and all the concession workers, none of this really happens,” Zeidman said. “We’re only as good as the people that are on the front line.”

But AEG, the Lakers, Clippers and Kings set up funding to pay venue workers until April 15, and also committed to keep workers informed of any changing situations.

“I’m most proud of the fact that we did this before anybody else did it,” Zeidman said. “I’m very proud of working with the Lakers, Clippers and Kings and AEG our parent company to get that done for our people. These people are the lifeblood of our business.”

With no games and no concerts, the 20,000-capacity STAPLES Center was quieted during the summer.

Suddenly, it became a place where voices could be heard.

Racial inequality and protests for social change spurred a coalition of Black athletes and artists to call on the public to vote. One of those figures was Lakers superstar LeBron James.

Through its partnership with the Lakers, STAPLES Center announced on Aug. 29 that the arena would convert into a polling center for Los Angeles County residents.

In another logistical and collaborative accomplishment, Zeidman’s team worked with the LA County Registrar’s Office and health officials (ensuring the safety of workers and voters) and successfully transformed STAPLES Center for 11 days.

“We had over 10,000 people come here. It worked without a hitch, and it was very important, I believe, for us to be part of that,” Zeidman said.

In the fall, these lyrics ran through Zeidman’s head.

On October 28, 2020, the Association of Luxury Suite Directors (ALSD) presented Zeidman with its Visionary Award in a virtual ceremony.

He thought back to one of his favorite artists, Kenny Chesney, and the country star’s song, “I Didn’t Get Here Alone.” 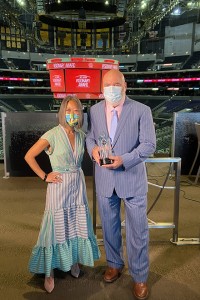 “He talked about in that song about all the roadies, all the stagehands, all those people that did everything to get him on that stage. That signifies exactly where I’ve come from. I didn’t get here alone,” Zeidman said. “I’m not who I am without the conversion workers, the security workers, the concession workers, the guest services workers, my staff.”

Zeidman’s career began at CSUN. He created the first student programmer position at the University Student Union and provided Matadors an escape at The Pub with Monday Night Football showings, Tuesday Night Comedy and Wednesday Night Live musical performances and jazz on Thursdays.

After four decades in facility management, he has helped provide millions escape by setting the stage for the biggest names in sports, comedy and music.

During the ALSD virtual award show, fellow leaders in his industry, executives and sports and entertainment giants such as Magic Johnson, Jerry West, Luc Robitaille, Garth Brooks and Andy Garcia paid tribute to Zeidman in a video.

As did his father, Edward, and his former boss, pioneering past president and general manager of the Forum, Claire Rothman.

For years, Zeidman has had a daily routine: Get to L.A. LIVE at 5:30 a.m. Work out in the gym. Shower in the locker room. Get to the office and work. Get in game-mode at 5 p.m. for that night’s big event. Have dinner. Stay till halftime or intermission. Once he is satisfied that the thousands have been entertained, go home.

Game-mode has been absent for nearly nine months.

The Lakers and Clippers tip off their 2020-21 NBA season at STAPLES Center in front of no fans. 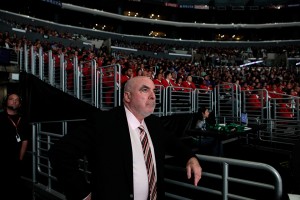 When fans eventually return, things will look different. The pandemic has fueled creativity and helped Zeidman and his team to re-examine its practices.

“I think we all in this industry had to figure out that we needed to reinvent — from the minute you buy your tickets, the minute you show up at the parking lot, the minute you come to the doors and you get in,” Zeidman said. “What this has allowed us to do, I believe, is actually speed up digitizing our venues.”

Fans will likely return to a more efficient, sped-up, cashless experience. A marriage of state, county, venue and promoter/team protocols will be in place, ensuring the safety of all customers.

However, when fans can come back is unknown.

Zeidman hopes it will be by late spring that he can flip the switch and the energy can return to the restaurants, the shops, the clubs and the arenas.

“I’m not a Debbie Downer or a Negative Nelly. I’m a Realistic Ricky to where I look at this thing, and I certainly understand where we are. And I’ve lived and breathed this pandemic because of what I do, and mass gatherings are part of what we do,” he said. “And I followed everything and I’ve watched the science, and I’ve watched how this has evolved. But I think we’re closer now.”