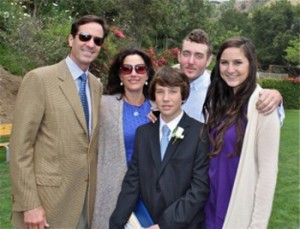 Earl and Karen Enzer, pictured here with their children, have given both time and funds to CSUN. From left: Earl, Karen, Colin, Evan and Rachel.

Earl and Karen Enzer met as California State University, Northridge freshmen at a Pi Kappa Alpha New Year’s Eve party. They had each grown up in the San Fernando Valley and, like most CSUN students, picked the school for its unique combination of great programs and reasonable cost.

The couple learned the value of their CSUN degrees soon after graduating. When Karen, who earned a bachelor’s degree in journalism in 1982, applied for her first job after graduation at Petersen Publishing, the final two candidates happened to be herself and a high school classmate who majored in English at UCLA. Karen got the position.

“That’s my example of the value of Northridge,” Karen said. “It trained me. I knew how to do the job.”

Earl, who graduated with a bachelor’s in finance in 1983, had a similar experience when he started an MBA program at Northwestern University’s Kellogg School of Management, the number one program in the country at the time. Earl was accepted to an accelerated yearlong program and, after arriving, found that he was better equipped for the program than most of his peers.

“I ended up tutoring kids in microeconomics and introductory finance, because even though they had a business undergrad degrees from well-known, private universities, I was better prepared,” he said. 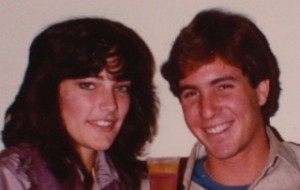 Earl and Karen Enzer in 1981 when they were both seniors at CSUN.

When he completed his MBA, Earl took a job with Goldman Sachs. After several years of watching Goldman hire undergraduate business school grads, he began to wonder about how to encourage CSUN students to apply for positions at the company. So, he contacted the College of Business and Economics. That led to a renewed involvement with the school and, eventually, an invitation to join the CSUN Foundation’s Board of Directors, which he did in 2001. Nine years later, in 2010, Earl was elected chairman of the board.

Beyond valuable connections with fellow CSUN alumni, Earl has found this re-engagement with education very rewarding. Seeing the inner workings of the university has reinforced the transformative power of education for him.

“The CSUs train people to be leaders, to come out of school ready to get to work,” said Earl, “and that’s transformative for individuals, for families and for communities.”

Earl has also learned first-hand that the budget situation in California has changed since he was a CSUN student. With more capital commitments beyond education, the state funds a lower percentage of the costs of higher education.

“That’s why we need philanthropy,” Earl said. “We need people to care about the university. Graduates, institutions and stakeholders in the university have to give back.”

Karen and Earl have joined the ranks of those who give.

However, giving as much as they would like isn’t always easy. As Earl shared, “You think ‘What if I need the money? What if my child gets sick? What if I have a disability? What if my parent needs long term care?’”

With one child already in college, another starting in the fall and the youngest in high school, these concerns are all too real for the Enzers. “We’re in the middle of funding for college and then we’ll be funding for retirement,” Karen shared.

So, in addition to annual gifts, the Enzers have also decided to include CSUN in their estate plan, setting aside a portion of their retirement funds to be given to the university. With this planned gift, the Enzers are ensuring that their family’s needs are met, while also leaving a legacy with CSUN. “We know that at that point, we won’t have any more spending needs,” said Earl, “and there’s something that we are leaving for an institution that we care about.”

For more: Learn more about planned giving to CSUN at visit www.csun.edu/plannedgiving.