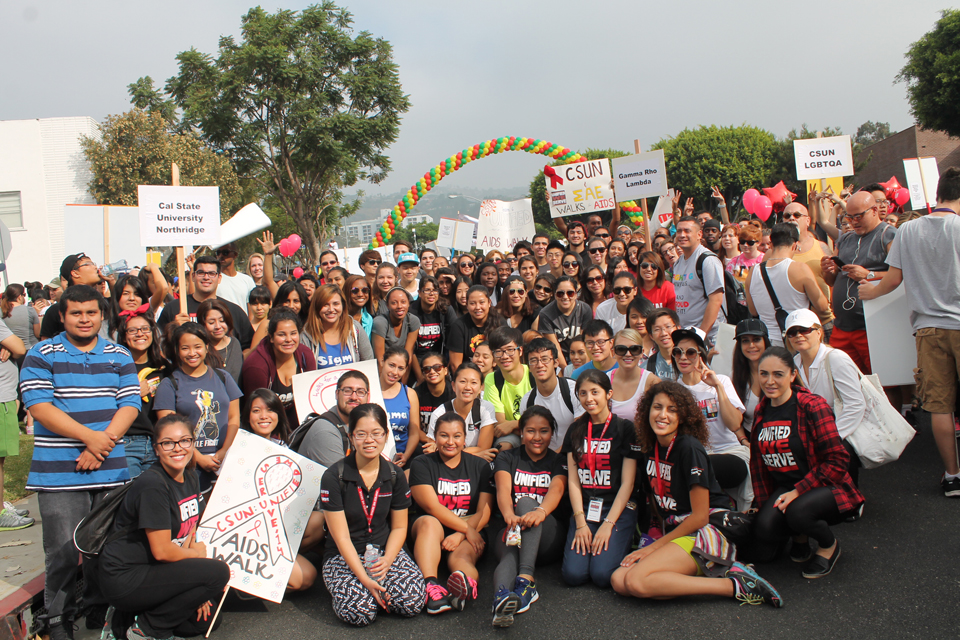 More than 260 CSUN participants were among the 25,000 walkers who filled the streets of West Hollywood and Los Angeles on Oct. 12 at the 30th annual AIDS Walk Los Angeles.

Nearly $2 million was raised in support of AIDS research. Since AIDS Walk Los Angeles was established in 1985, $79 million has been raised for 25 HIV/AIDS service organizations throughout Los Angeles County. Most of the proceeds from the event go to AIDS Project Los Angeles (APLA), helping it provide vital services to thousands living with HIV and AIDS in Los Angeles, and run the county’s largest network of prevention programs.

The AIDS Walk is one of the biggest annual events hosted off campus by Unified We Serve (UWS) – CSUN’s Volunteer Program. UWS provided four buses to transport CSUN students to San Vicente Blvd., where the 10K walk began. The event brought a sense of camaraderie from so many different student organizations throughout the campus.

“We had representation from various groups on campus,” said CSUN’s Activities Assistant for Volunteer Programs and Services Ani Avetisyan. “There were different clubs and organizations, student veterans, student-athletes, students from the LGBT community, fraternities and sororities, as well as Unified We Serve members. It was really beautiful to see that so many student organizations came together for such an important cause.”

Avetisyan said that during the UWS meeting before the event students participated in discussions surrounding common misconceptions and stereotypes about HIV and AIDS. During the walk Avetisyan noted that, “the beauty of the AIDS Walk event is that participants are unable to distinguish between those affected by HIV and AIDS and other seemingly healthy individuals.” And aside from the wide array of CSUN organizations that were represented, it was the number of people walking that really stood out.

“There were many other universities there and we were one of the largest,” Avetisyan said. “It was nice to see so many CSUN students come together to show their love and support for those battling HIV and AIDS.”