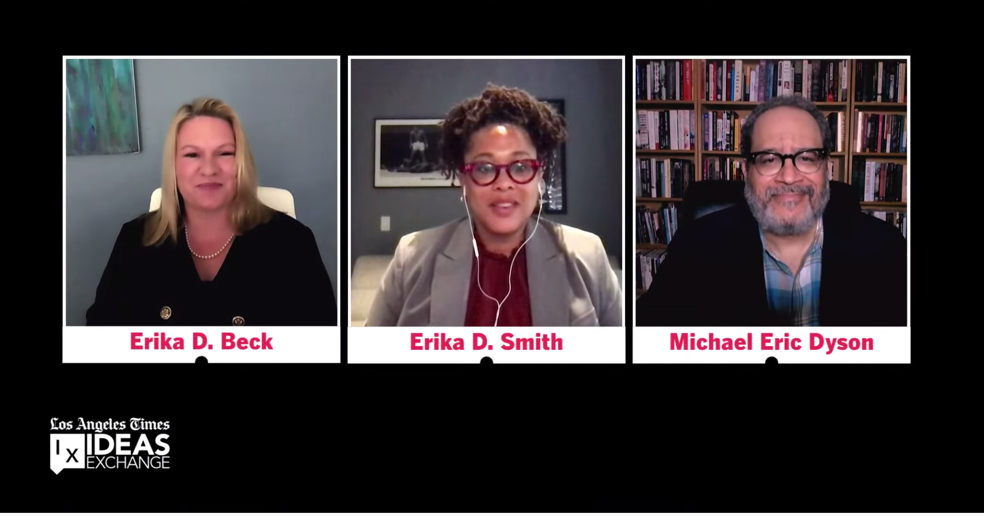 Screenshot from the digital Los Angeles Times Ideas Exchange event on May 11.

Dyson spoke on racism, police reform, technology, cancel culture and more during the virtual event on May 11.

Dyson’s latest book, “Long Time Coming: Reckoning with Race in America,” was written during what he called the “sin-demic,” the time of convergence of the COVID-19 pandemic and the racism pandemic which has taken the lives of many Black men and women.

“Our responsibility is to do what we know to be the right thing at all times, and at the right time, it will catch fire and change the world,” Dyson said.

His conversation with moderator and Los Angeles Times columnist Erika D. Smith was peppered with quotes from NWA songs, Bible verses and poetic turns-of-phrase that made his thoughts on heavy topics such as police violence even more poignant.

In her introduction of the discussion, CSUN President Erika D. Beck highlighted the university’s commitment to diversity, inclusion, equity and justice, and the importance of education in making change.

“Education is one of the best tools we have to realize necessary change because it is the answer to so much of what ails us,” Beck said.

Though progress has been made, she said, the road ahead is long and much work is left to be done.