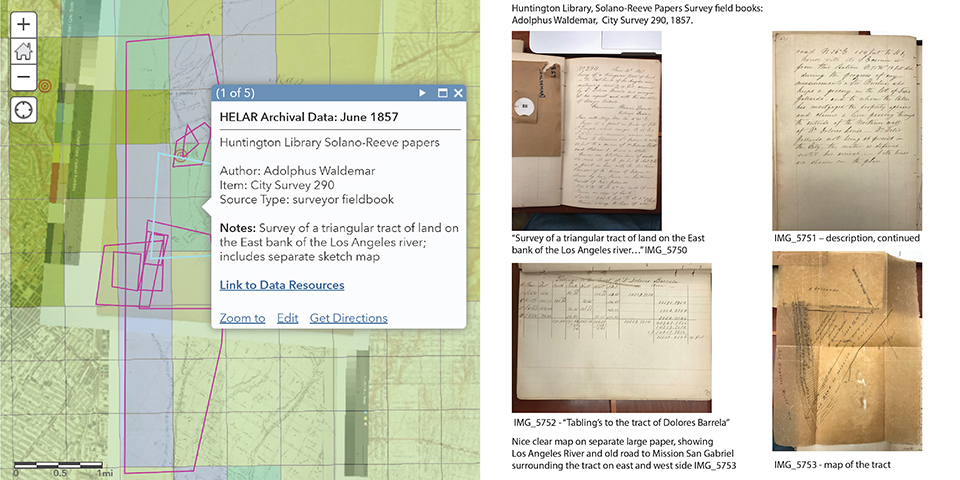 As Los Angelenos envision their future — whether it’s housing, parks or wellness — there is much they can learn from the past.

Two California State University, Northridge faculty members are part of a multi-institutional, interdisciplinary effort to create a detailed virtual map of the city’s ecological and topographic history — the flora, fauna, hydrology and landforms — to help inform regional and local planning efforts involving sustainability, habitat restoration and preparing for the impacts of climate change.

“It’s also a wonderful opportunity to educate those who live in Los Angeles about what was here before, and help inform our decisions about what should be here in the future,” said Natale Zappia, an associate professor of history and director of CSUN’s Institute for Sustainability.

Danielle Bram, director of CSUN’s Center for Geospatial Science and Technology, who is working with Zappia on the project, agreed.

“When we talk about the Los Angeles landscape and what was here before, people usually insist the area was a desert,” Bram said. “Well, that’s not necessarily true. I don’t think people realize, for instance, that parts of central Los Angeles used to be a massive wetland complex. It’s really important that people understand the land we now occupy when they think about its use and the role of water.”

Zappia and Bram have partnered with faculty at University of California, Los Angeles and University of Southern California, who initiated the project — as well as faculty at Cal State Long Beach and Cal State Los Angeles and members of the Tataviam, Tongva and Chumash tribes — to synthesize indigenous knowledge, historical topographical data, indicators of wildlife species, cultural archives and historical aerial photography to create the first-ever interactive online map of Los Angeles’ historical landscape. The project is being funded by a grant from the John Randolph Haynes and Dora Haynes Foundation.

By focusing on six ancient centers of human settlement and landscape management, the researchers plan to reconstruct the actual appearance, from every angle, of the ecological history of the Los Angeles Basin pre-urbanization. They hope to create something similar to a project done a few years ago about New York City called “Beyond Mannahatta, the Welikia Project.”

Zappia will be working closely with members of the Tataviam Land Conservancy, Gabrielino/Tongva tribe and the Barbareño/Ventureño Chumash Nation to gather detailed information from indigenous communities about the historical landscape of Los Angeles, and learn how those communities interacted with the land. The collaborators also will work with those communities to protect knowledge and resources, such as ceremonial rites and sacred spaces, that indigenous communities believe should remain unmapped or unknown to non-indigenous audiences.

Bram will be tapping into UC Santa Barbara archives of historical aerial photographs of the Los Angeles Basin from the 1920s and 1930s. Each of the photographs, taken to survey and map the land, will be georeferenced — the internal coordinate system of a photo will be related to a ground system of geographic coordinates — to adjust the image so that it can be related to its geographic location. This process will enable Bram and her students to compile a seamless aerial mosaic, using multiple images, of the Los Angeles River, adjacent riparian lands and floodplains and other key locations.

Zappia’s and Bram’s work will be combined with the work of geographers, historians, ecologists and others to create a virtual model of what the Los Angeles Basin looked like hundreds of years ago, as well as provide insight into how its inhabitants at those times interacted with the land.

“This project has so many audiences,” Zappia said. “From a public policy point, it can be invaluable in providing information about a particular piece of land and what was once there.”

“And from the public standpoint,” Bram added, “it allows all of us to learn more about Los Angeles and what the landscape looked like before urbanization and massive growth.”

They both envision the map being used by urban planners and educators, as well as residents curious to learn more about the history of the land they now occupy.