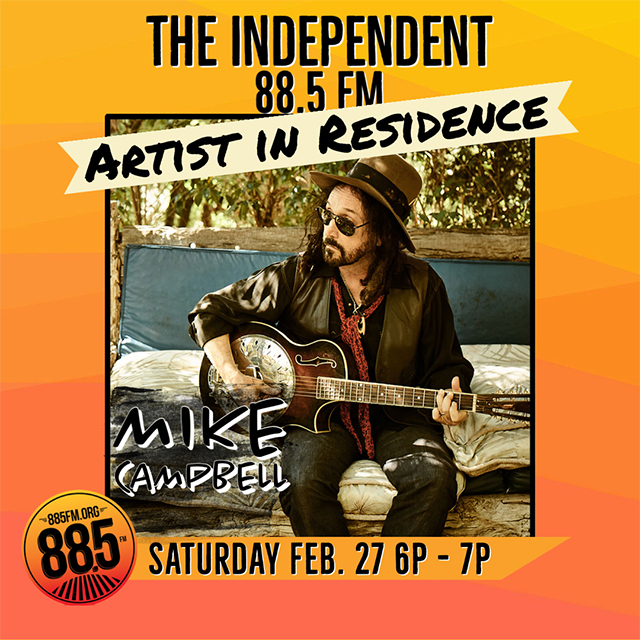 The “88.5 FM’s Artist in Residence” radio show launches Saturday, Feb. 27, and will be taking over the hour — 6 to 7 p.m. — formally filled by multi-Grammy Award winner and Rock and Roll Hall of Famer Joe Walsh, who is returning to the recording studio after spending the past 10 months as host of 88.5-FM’s weekly “The Joe Walsh Old-Fashioned Rock n’ Roll Radio Show.”

“This is an opportunity to partner up with friends of 88.5-FM in high places … artists at the top of their game and titans of various industries who have an affinity for radio and who want their own show,” said 88.5-FM Program Director Marc “Mookie” Kaczor, who added that while the 88.5-FM team will miss Walsh’s show, “Joe is still a big fan of ours and will always be part of the 88.5-FM family.”

Launching “88.5 FM’s Artist in Residence” as its first host will be acclaimed guitarist, songwriter, record producer and Rock and Roll Hall of Famer Mike Campbell. Campbell was a member of Tom Petty and the Heartbreakers, and he co-wrote many of the band’s hits with Petty, including “Refugee,” “Here Comes My Girl,” “You Got Lucky” and “Runnin’ Down a Dream.” He has performed, written and produced with such artists as Don Henley, Johnny Cash, Fleetwood Mac, Lone Justice, Tracy Chapman, Warren Zevon, Roy Orbison, George Harrison, Stevie Nicks, John Prine, Bob Dylan and Jackson Browne. He is also a member of the band the Dirty Knobs.

On March 6, the band Lake Street Dive will be taking over the hosting duties of the “88.5 FM’s Artist in Residence” radio show for the entire month of March.

Lake Street Dive, which just released a cover version of Carole King’s “So Far Away” to salute the 50thanniversary of her seminal album “Tapestry,” is known for its wide-ranging taste in music — from pop, rock, rhythm and blues to jazz. Its members include Rachael Price, Mike Olson, Bridget Kearney, Mike Calabrese and Akie Bermiss. The band’s sixth album, “Obviously,” produced by Mike Elizondo, is expected to be released in March. The first track from the album to be released, “Making Do,” came out last year. The band’s new single, “Hypotheticals,” is currently heard on 88.5-FM.

Singer, songwriter and producer Nick Waterhouse will host serve as host of the show for the month of April. Waterhouse, whose sound is rooted in rhythm and blues, jazz and soul, is schedule to release a new album, “Promenade Blue,” in April. In anticipation of its release, he released a single from the album, “Places to Name,” a couple weeks ago.

88.5-FM is a combined effort of California State University, Northridge (CSUN) and Saddleback College, which began simulcasting in 2017, linking the Los Angeles County- and Orange County-based signals. The state’s Triple-A programming is available on the KCSN and KSBR HD1 channels, via the 88.5 FM So Cal app, and online at www.885FM.org.